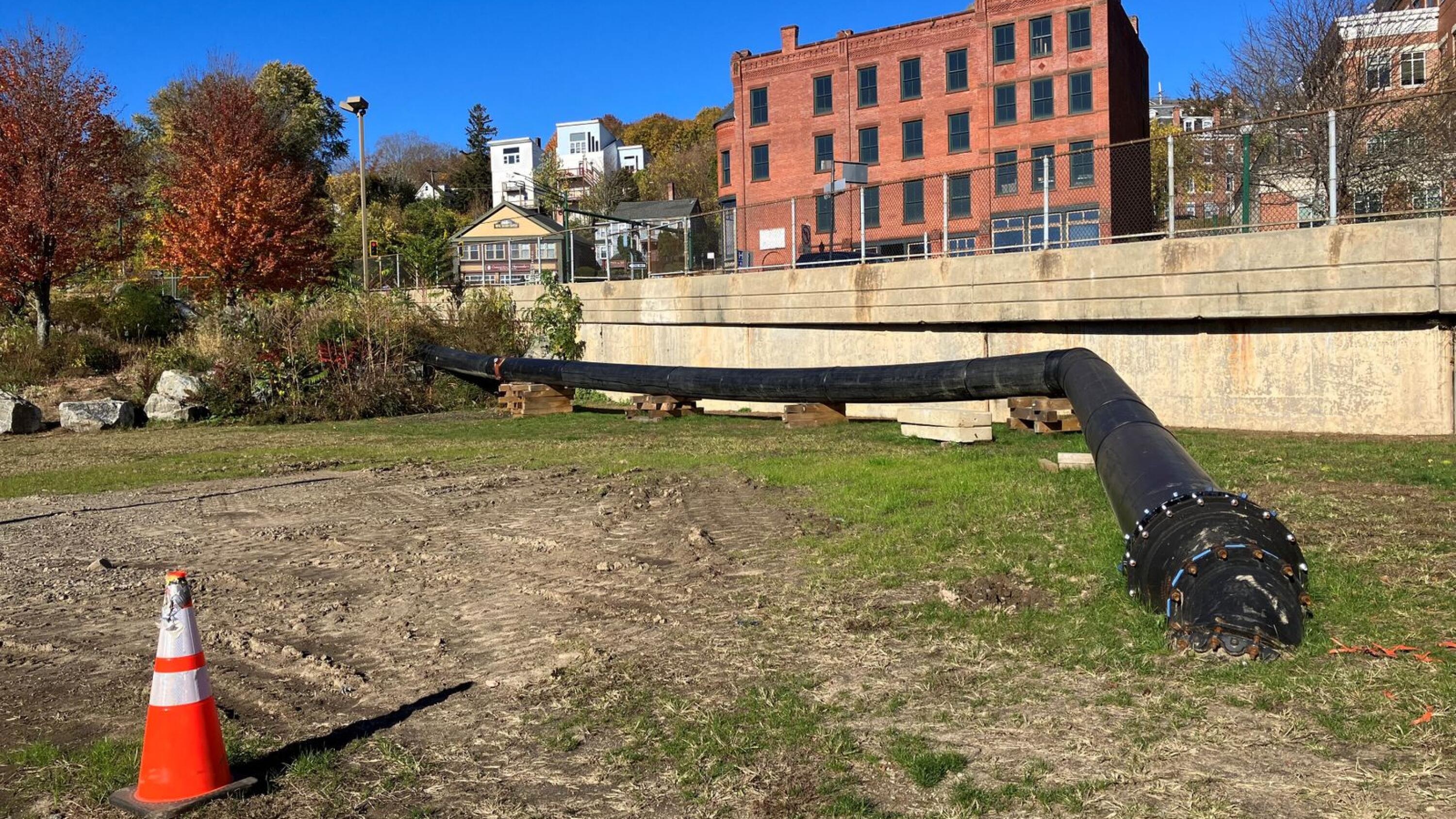 A temporary sewer line, shown on Thursday November 3, 2022, was installed on the property adjacent to Howard T. Brown Park in the Port of Norwich as a bypass in late December 2021 after the main line was cut from the main line running along of the marina property runs in the eastern branch of the Yantic River. Norwich Public Utilities is hoping for City Council approval on Monday 7th November 2022 to repair the damaged main main. (Claire Bessette/The Day) Buy photo reprints

The sidewalk on West Main Street from the Norwich Marina entrance to the intersection with Chelsea Harbor Drive, shown Thursday November 3, 2022, has been closed since late December 2021 to accommodate a temporary sewer line which will be drained after a installed along the main line running Yantic River was collapsed at the marina. Norwich Public Utilities is hoping for City Council approval on Monday 7th November 2022 to repair the damaged main main. (Claire Bessette/The Day) Buy photo reprints 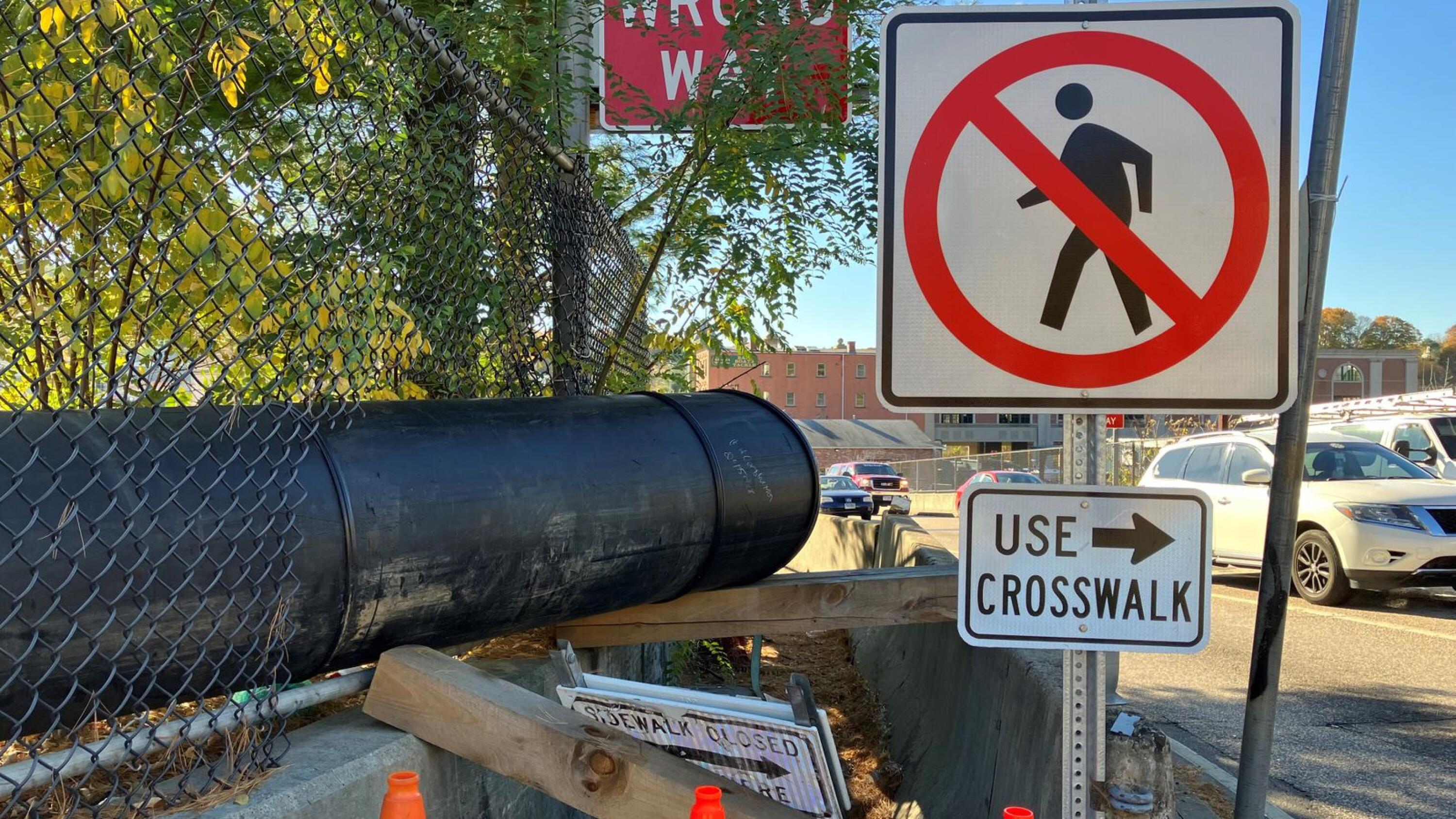 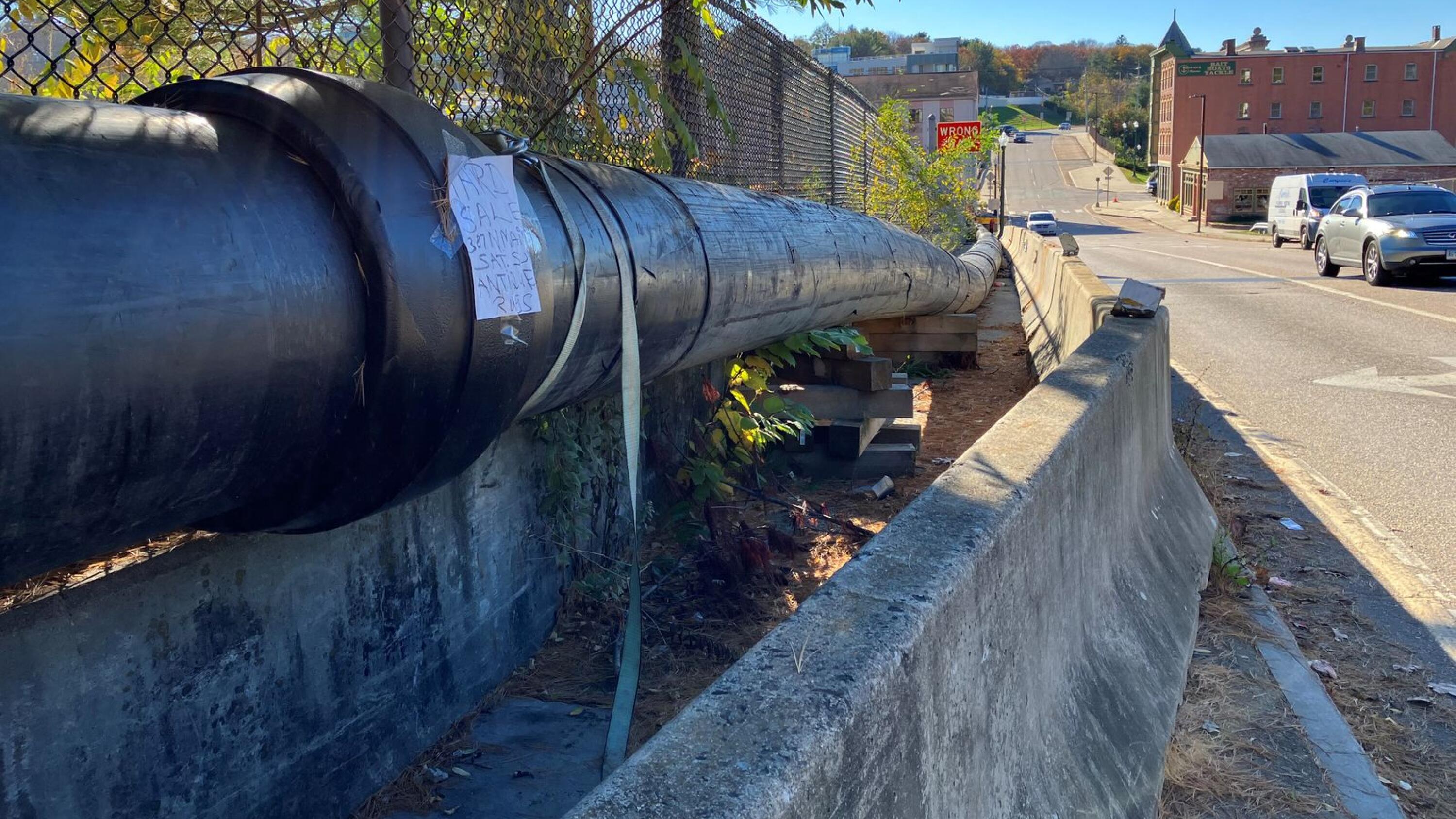 Norwich — A section of the Port of Norwich sidewalk has been closed for 11 months, blocked by an emergency sewer pipe installed after an old 20-inch diameter underwater sewer main from the pumping station in downtown Rose Alley broke in late December.

Repairs to the main underground sewer system are one of six sewer and water repair and maintenance projects totaling $15 million to be reviewed by the City Council on Monday. The council will hold public hearings on the projects at the beginning of the session at 7:30 p.m. in the Kelly Middle School Auditorium. All projects would be funded through combination grants and 20-year soft loans.

Federal funds under the new Infrastructure Investments and Jobs Act, administered by the state Department of Health, provided the NPU with more than usual grant money for water and sanitation projects. NPU would receive $6.5 million in grants for the combined projects and $8.5 million in 20-year 2% interest rate loans.

The loans would be repaid by water and sewage fee payers, NPU spokesman Chris Riley said. The projects would also not affect the 10% water revenue that NPU gives to the city each year in a revenue-sharing provision in the city charter.

Three canal major repairs are part of the edition package. Along with the $2.25 million repairs to the Rose Alley subsea main on the east branch of the Yantic River in Norwich Harbor, the NPU proposed $6.75 million to repair two mains on the west shore of the harbor in South Thames Street and Pumping in Cove Street railway station.

Larry Sullivan, the NPU’s wastewater integrity manager, said utility representatives are optimistic the Rose Alley pipe repair could be completed for much less than the estimated $2.25 million because the existing line inside the pipe will be re-lined instead of diverting the flow through new pipes. If the city council approves, that work will soon be done “with a quick bid” so the sidewalk can be reopened, Sullivan said.

The repairs at South Thames Street/Cove Street are more complicated because the disruption is under the freight rails in central New England and involves repairs to the sewer line that runs across the Yantic River, Sullivan said. The disruption was circumvented with a makeshift PVC plastic mainline, which now runs alongside the railroad tracks.

Repairs and maintenance work on three water towers are on the agenda. The ground-based, 80-foot-tall, 750,000-gallon steel water tank on Richard Brown Drive in Montville and a similar 75-foot-tall, 670,000-gallon tank at Norwich Business Park both require aeration mixing systems to reduce standing water and the build-up of organic by-products that interact with chlorine treatments, NPU officials said. The aeration systems cost an estimated $1.8 million per tank.

The tanks are oversized for the needs of water customers because they also provide a source of water for firefighting, Riley said. But that means the water is stagnant.

The 199-foot, 400,000-gallon capacity Yantic Water Tower would receive $2.4 million in required maintenance and an exterior coating as a package.

In addition to the water and wastewater projects, the NPU is asking the City Council to allow the city utility to borrow a $10 million line of credit to fund future capital projects. Riley said the city council ordinance would only allow the supply commission to borrow in the future, rather than make money available immediately. Under the charter, NPU debt must be approved by both the service commission and the city council, Riley said.