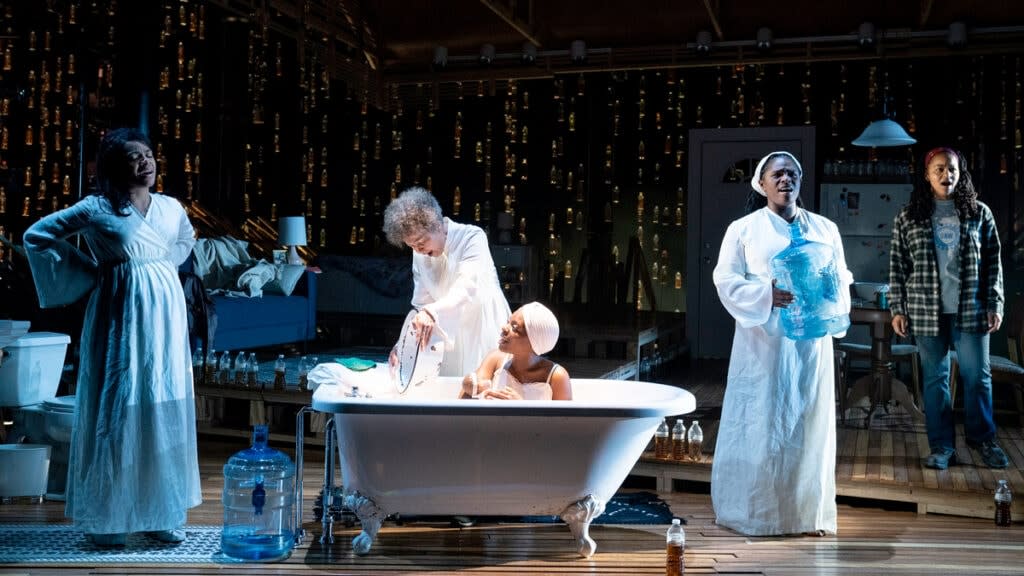 A comment in the Playbill for Erika Dickerson-Despenza’s powerful new play “Cullud Wattah” refers to Ntozake Shange’s “For Colored Girls …”, which also premiered in 1976 in the Public Theater. “Cullud Wattah” opened at the same time the venue was opened on Wednesday, and with all due respect for Shange’s “Girls”, this new piece is also reminiscent of a somewhat younger audience premiere in 1985.

As with Larry Kramer’s “The Normal Heart”, Dickerson-Despenza’s “Cullud Wattah” addresses a crisis in real time. Kramer reported on the AIDS epidemic in New York City from 1980 to 1984; Dickerson-Despenza reports on the poisoned water in Flint, Michigan, from 2014 to 2016, with a coda that carries that public disaster to this day. Both “Heart” and “Wattah” brought heavy charges against a government and a completely deranged economy.

Dickerson-Despenza is as gifted a storyteller as Kramer and Shange, but also a conventional one. To add yet another famous name to this review, “Cullud Wattah” is just as drum-proof in its plot as Arthur Miller’s “All My Sons”. Dickerson-Despenza tells the story of a three generation family of five women who live in Flint and are trying to survive; But even before toxins made the water unusable for human consumption, two adult sisters were already on their way to the showdown. This troubled past erupts when one tries to take part in a class action lawsuit against the government, the other wants to keep her job after a big promotion. The water crisis makes for an effective melodrama; the sibling rivalry turns out to be tragic. As two very different sisters, Andrea Patterson and Crystal Dickinson draw much more than just stage blood in this elementary battle of wills.

Miller’s ammunition maker commits suicide at the end of “All My Sons”. Dickerson-Despenza does not give her character so easy a way out. Instead, there is a whole second act to examine the consequences of their actions or, more importantly, their silence.

“Cullud Wattah” is not an easy piece to get through. The effects of the poisoned water can be seen in the characters in rashes, blisters, and hair loss. Only one of the five women shows no ill effects, and that’s because Big Ma is older and moved to Flint from the deep south, where she escaped one type of racism only to find another. Whenever Lizan Mitchell’s Big Ma appears on stage, that is a big moment on “Cullud Wattah,” and these scenes span the spectrum from her harsh disapproval of a daughter’s pregnancy to fond memories of love for another woman to a deeply sad and unaccepted apology. Mitchell introduces us to the entire life span of this complex character.

Beyond the litany of health warnings, there are the constant questions these women ask themselves, how many plastic bottles of water it takes to cook the potatoes, wash the beans, and wash the utensils. “Cullud Wattah” gives the words “kitchen sink drama” a whole new meaning. To what this genre typically offers, Dickerson-Despenza adds a few didactic but gripping speeches, adding everything with a lyrical surrealism. Alicia Pilgrim plays the youngest member of this family and embodies this walking nightmare without ever revealing the girl’s exact age. Lauren F. Walker skillfully plays her sister, and the physical contrast between her character and Pilgrim’s is just one of many silent but haunting touches director Candis C. Jones brings to the story.

Another is Adam Rigg’s scenic design of a house floating between hundreds of plastic bottles of brown water.