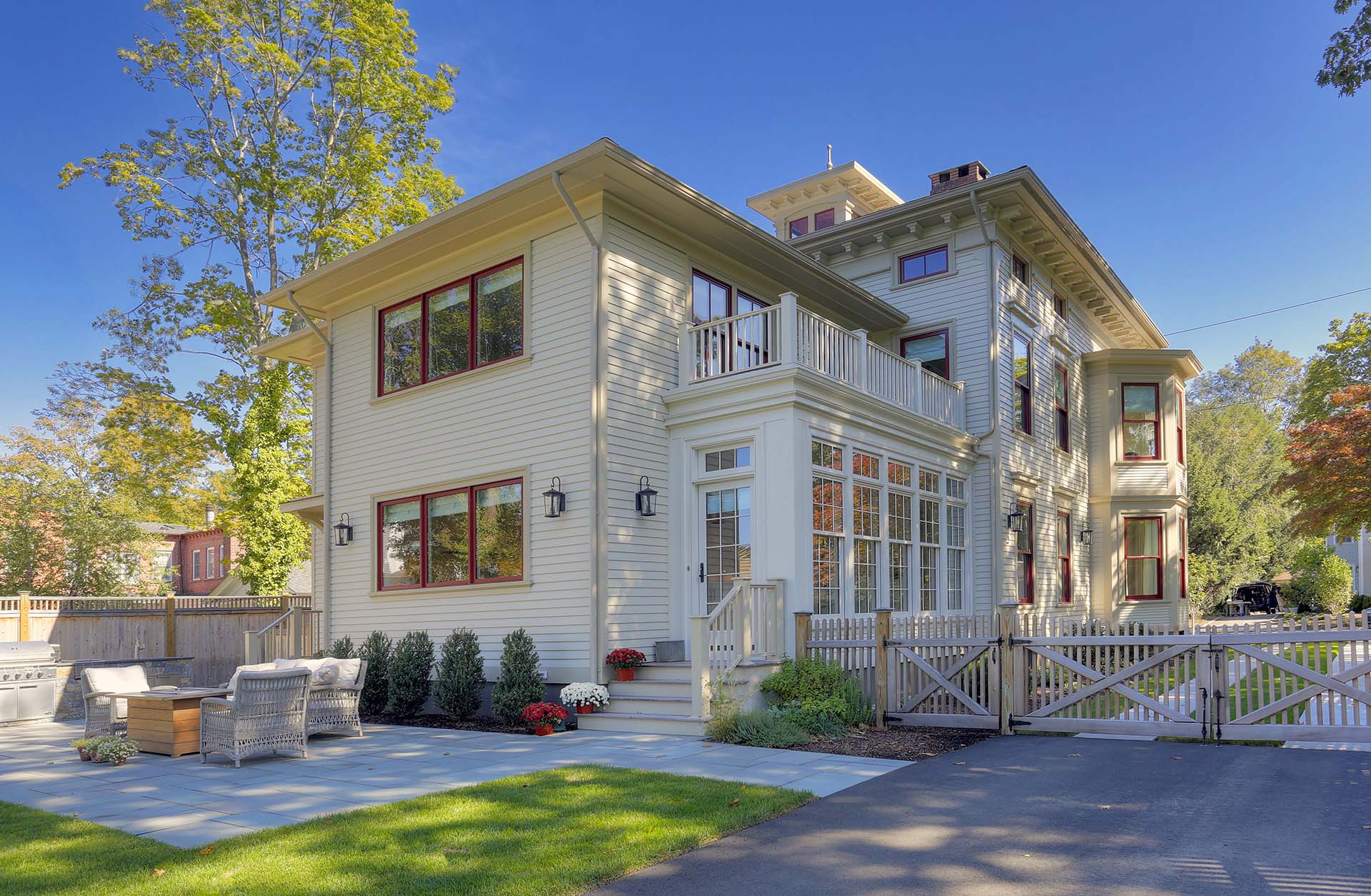 After Capt. Todd Seniff and his wife Joette had lived around the world and in the States for two years in their 30-year career as Navy SEALs, they could have chosen anywhere to retire. But it was the sense of community and family history and heritage that eventually brought her to the 1893 Italian-style Guilford home where Todd was born and raised.

“Guilford has a sense of history that’s really important to me because of its steadiness and character, depth and seriousness, and all the things you don’t get in other parts of the country,” says Todd, who bought the home from his parents in 2009 to help them get it and live the way they wanted to the end of their lives. “Coming home to this house was absolutely right for us.”

Todd retired as a US Navy Captain in June 2018, and they immediately drove from their last home in San Diego to their home in Guilford. A few steps from the green of the city, this historic house was ready for a restoration. Todd’s parents had bought it in the early 1960s, and over the years many of its details had been hushed up or neglected. The last significant improvements were made in the 1970’s when an addition was built to the rear of the house, but this was not in keeping with the originality of the house.

It was important to the couple to return the home to its former glory while enhancing functionality and incorporating modern conveniences to upgrade the home for modern living. And they wanted to do it right. After all, they laid a foundation for the next phase of life and future generations, so that they could finally look forward to a permanent home base after years of moving.

To complete the restoration of the home, a previous rear extension was removed and replaced with another addition with a period aesthetic.

“In the 30 years that Todd was an active-duty Navy SEAL and saw quite a bit of devastation in wartime, he had to reach down and ask himself, ‘What was he fighting for?’ And it was hearth and home,” says Joette, who is originally from North Carolina and met Todd after college in Virginia before getting married and having two sons together. “And so we’re thinking about it now and we’ve thought a lot about coming back here. It’s about what this place is and what it means to us as a foundation. That’s what matters.”

During the couple’s first year and a half in the home, they met with Russell Campaigne, owner of Guilford-based Campaigne Kestner Architects. Having worked on many historic homes in the neighborhood, Campaigne enjoyed an excellent reputation and also served as Chairman of Guilford’s Historic District Commission. And ironically, Campaigne’s family had restored and occupied a 1717 colonial building at the end of Seniffs’ Street when Todd was on his way to college.

“We tried to restore the back annex, but it didn’t have the grandeur of the original house,” says Campaigne, adding that the home is in the historic district and is one of about six high-style, high-ceilinged properties that Trim details, overhangs and an Italianate architectural interest. “When it was added, the floor height was lowered to the second floor. So it had low ceilings and very small windows. With the cost of restoring a house like this, taking it down and redoing it wasn’t much of a problem. This allowed us to give the rear extension the same look and feel as the original house.” 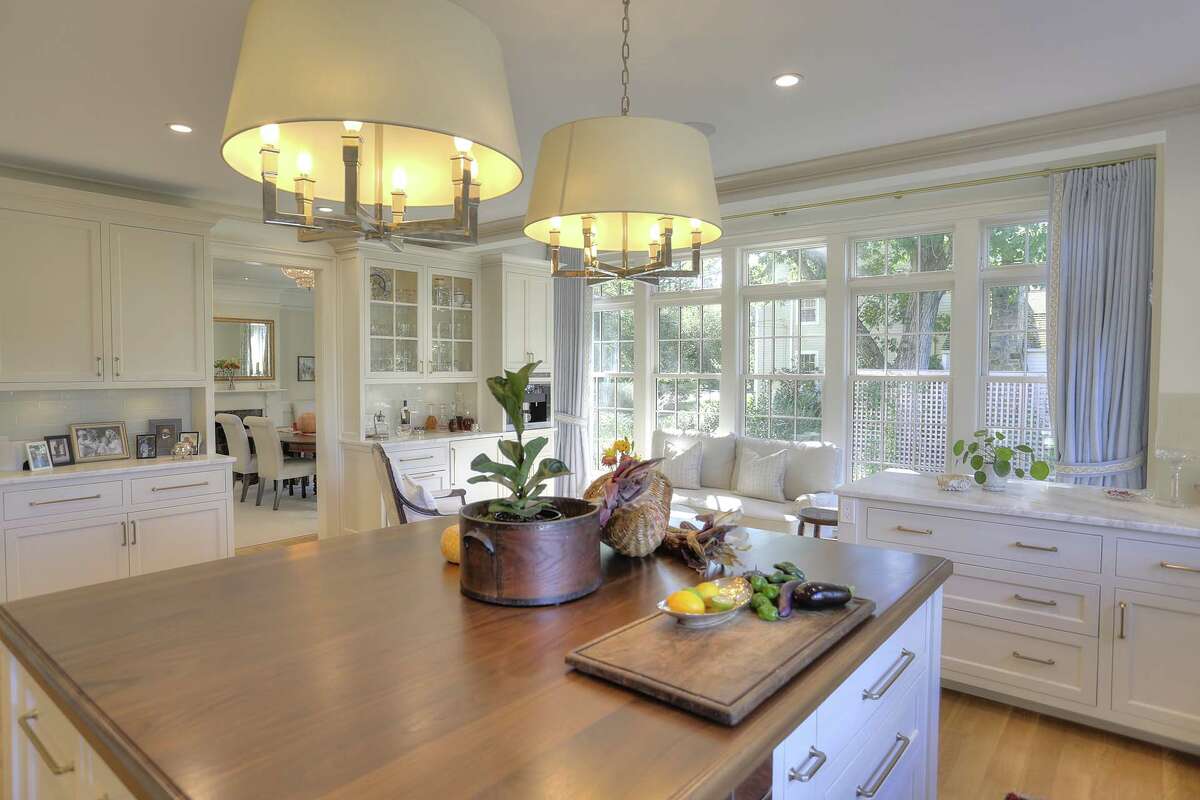 Part of the upgraded annex is a spacious kitchen with a center island in the butcher block.

Campaigne worked with Laura Taglianetti, Architect and Project Manager, to design a new two-storey extension that houses a spacious and modern kitchen, a windowed conservatory, a first-floor entrance hall and a second-floor master bedroom suite. The entrance foyer has been opened up in its original layout, revealing the three-story staircase with intricate wooden posts and railings. It now connected the front of the house to the rear annex and improved circulation in the main rooms. New custom cabinetry and millwork were inspired by or recreated from existing trim profiles. And the beautiful inlaid wood floor has been carefully repaired and repainted.

“Our master builder, Tom Tolla, restored all of the original trim and showed such attention to detail and creativity,” says Todd. “His craftsmanship was truly instrumental in the magnificence of the house.” 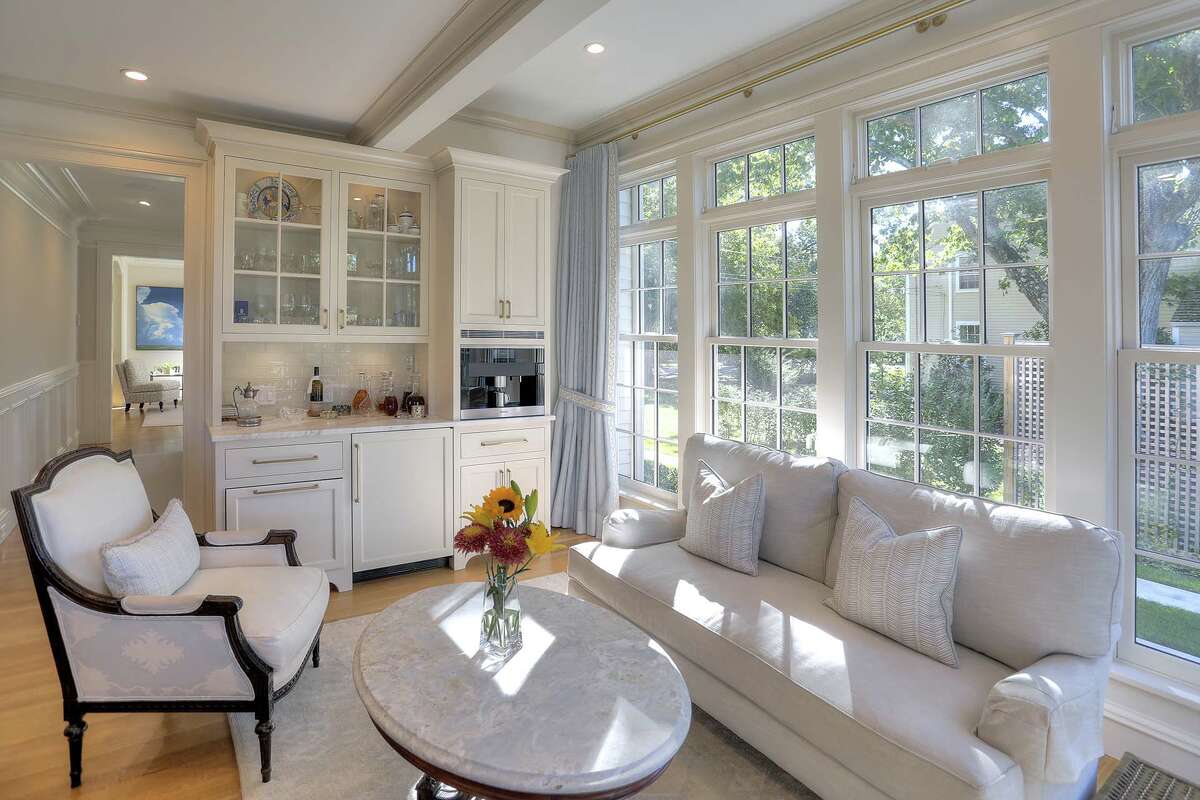 The new kitchen includes a relaxed, bright seating area with floor-to-ceiling windows and a built-in bar and coffee station.

Exterior details of the original structure – deeply overhanging eaves with decorative brackets, gently sloping hipped roofs, tall, narrow windows and decorative porches – have been carefully restored. Simplified versions were used in the extension so that the main historical part of the house could take center stage. New plumbing, electrical and HVAC systems, coupled with improved insulation and new windows, increased the home’s efficiency and functionality, and brought it into compliance with current building codes and standards.

“I wanted to make sure we ended up in a place that exuded calm, quiet, and peacefulness,” says Joette, who notes that she and Todd enjoy cooking, gardening, and entertaining. “A 30-year career in special operations comes with its own very specific set of struggles and hardships. Through all his military service, countless as far as I can remember, he has suffered physical and mental injuries that have rendered him 100 percent unable to work [Veterans Affairs] norms. The loss of so many friends and teammates takes its toll in many ways, so creating a bright, warm and elegant retreat was very important.”

With four bedrooms, each with a full bathroom, plus an additional 2½ baths, the 3,800 square foot home offers plenty of space for her two sons, who currently live and work elsewhere, and their future families. Here, the two say, their boys always wanted to come back to visit their grandparents, and they love it more than any other place on earth.

“One of the things I liked about Todd and Joette is their emotional connection to the house,” says Taglianetti. “A lot of people are renovating a house they’ve never lived in before or building a brand new house. This design process was unique because they would add stories about memories in different areas of the home. It added another layer of appreciation and meaning to knowing that you are helping them and giving them the opportunity to create new memories with family.” 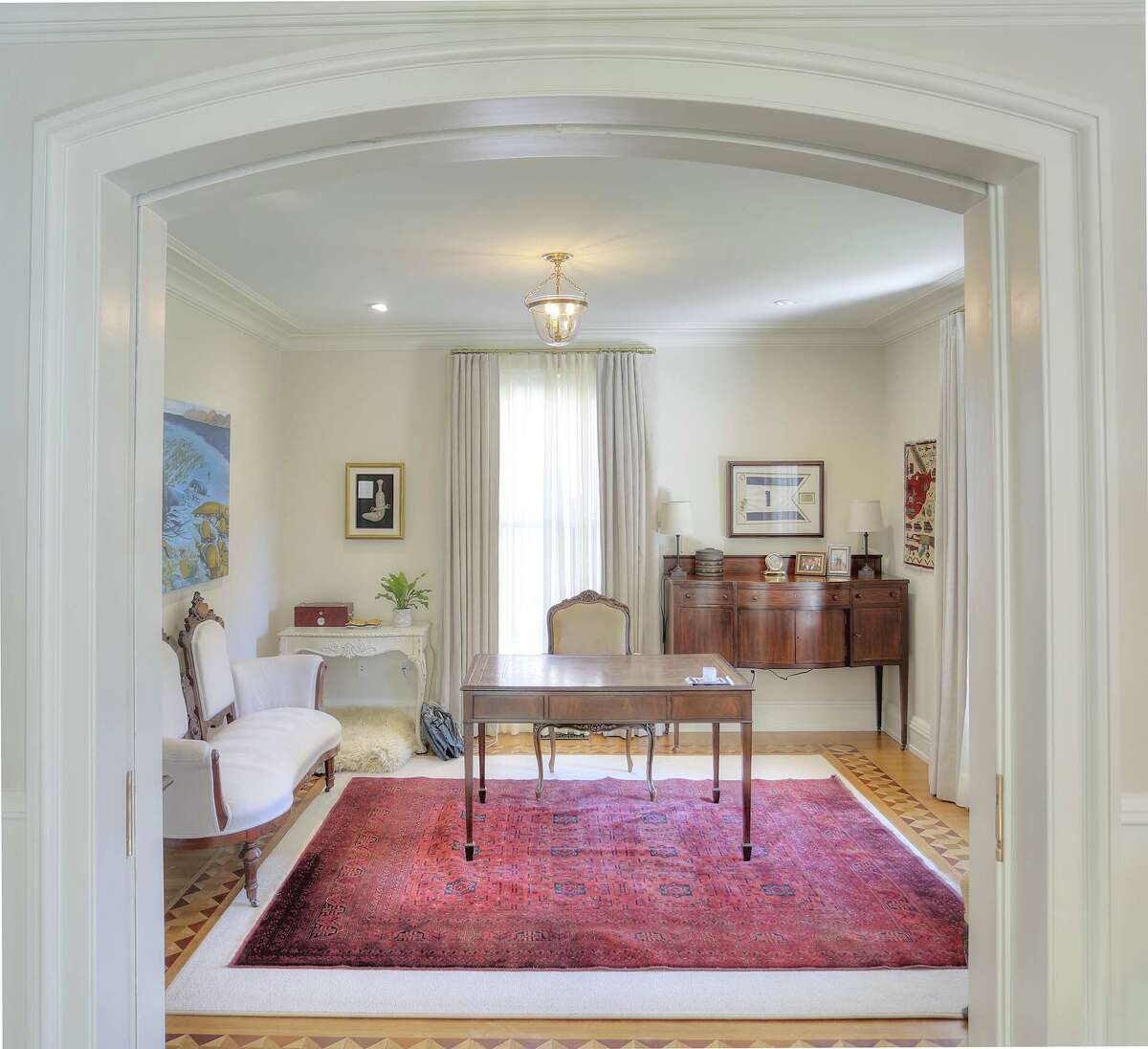 Todd’s office, which used to house his father’s orthodontic practice, is a soothing space with finely restored inlay work in the wooden floor.

Today, Todd and Joette own the Seniff Group, which advises organizations and individuals on leadership strategies. Todd’s office is behind the entrance in the North Parlor where his father, the local orthodontist in town, opened his practice years ago. Tolla cleaned the half-glass door that was the front door to his father’s office and used it as a basement door. It lets borrowed light into the basement where there is a wine cellar, fully stocked pantry, gym, art studio and a nautical/marine themed man cave. What used to be a gray, dark area with a fountain and original coal bunker where Todd and his siblings would sometimes play on rainy days is now the “most multifunctional floor in the house and it turned out to be really cool,” says Todd.

“Some might say, ‘Oh, you two live in this big house,'” says Todd. “But we use every floor and every single room every day. It remains the home I grew up in and will return to as home.”