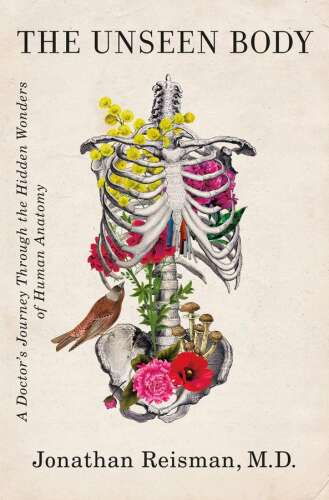 When Jonathan Reisman treats patients in the ER, his mind goes far beyond what he learned in medical school.

The medical doctor, who lives in West Philadelphia, studied mathematics in college. He then spent five years in Russia studying forestry, water quality and anthropology and working as a translator for outdoor adventure tour groups. He has developed a keen interest in outdoor survival skills, teaching himself what mushrooms are safe to eat and how to tan animal skins. He went to sea on an indigenous whaling boat.

All of this comes into play in The Unseen Body (Flatiron Books, $27.99), in which he takes readers on an organ-by-organ journey through human anatomy, drawing parallels to natural phenomena and his world travels.

We asked him about his, as he admits, “offbeat perspectives” on the field of medicine.

Q: At a hospital where you worked, you asked the manager of maintenance to give you a tour of the building’s plumbing system. What did you learn?

A: I’ve learned that a plumber solves a plumbing problem the same way a cardiologist solves a heart attack. If the water pressure drops throughout the hospital, that tells him something different than if it just drops in a specific wing or floor of the hospital. It’s this regional vs. global problem. To find out where the blockage might be, what the problem is, one has to understand the branches of the tubes that supply the entire hospital or the arteries that supply the heart.

Q: Was he surprised when you approached him?

A: He was. I thought, “Hey, I’m writing this book. Can you show me where you work and how you solve problems?” I was the first doctor to enter this room, which he called the valve room. It was the heart of the hospital installation. He spent an hour guiding me. He probably still thinks I’m a little weird. He showed me what I would call the arteries – the supply of fresh water to the hospital, and what I would call the veins – the drainage of sewage under gravity.

Q: As a lifelong naturalist, you have described the kidney in terms of its role in the body’s ecosystem. What sparked this idea?

A: I call it a key species in the book. This is an ecological term for a species on which an entire ecosystem can rest. If this type of key is reduced in number, it can bring the whole house of cards down. Kidneys are the first to be injured in serious illness. They are one of the first things to start failing. I compare it to a canary in the coal mine. Oftentimes, kidney failure is what we look for first in people with severe overwhelming infection or what we call a cytokine storm.

From an ecological perspective, the kidney also cleans, much like wetlands act as buffers against water level changes and pollution, absorbing toxins and helping to protect inland waters from salt.

Q: Years ago you went to sea on an Iñupiat whaling boat. Describe how you rediscovered the beneficial side of fat.

A: When I graduated from medical school, fat was always portrayed as an enemy. This applies to fat in our diet, fat in the bloodstream in the form of cholesterol and triglycerides, and fat in our body in terms of obesity. When I was in Alaska and learning about the traditional culture and diet, I realized that fat was a huge part of their lives. More than half of all calories are animal fats. No greens or veggies. And if you go far enough north, there are no berries. For her, fat was the only thing that allowed people to live in such a harsh environment. Fat is like arctic currency. Yet they actually have very low rates of cholesterol and heart disease. Now that they have partially switched to a modern American diet, they suffer from the same diseases as all of us. I think nutritional science is just beginning to understand fat and its role in health and disease.

Q: You wrote that one part of the human body seems to be particularly vulnerable and poorly constructed: the neck. How would you fix it?

A: It would be much better if the trachea was for air and the esophagus for food and drink and everything else – it would be more convenient if they weren’t right next to each other.

Every time we unconsciously swallow all day, every day if you swallow just once wrong, you can die (from choking or aspiration pneumonia). It seems like a really stupid design. The muscles and cranial nerves are part of this very orchestrated system. It’s very coordinated and perfectly timed, so the tongue moves up as food rushes down the windpipe… This clogs it up, allowing food to flow right past it without going in. When you learn some of these things in medical school , you’re kind of amazed that it works as well as it does. Similarly, when you figure out how sperm and eggs find each other, it’s a wonder it works at all.