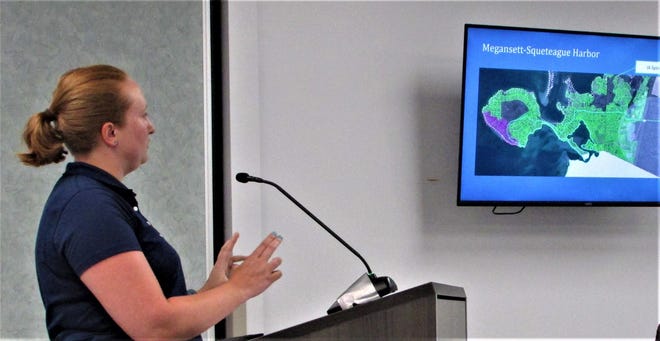 BUZZARDS BAY — Questions about upgrading sewage systems in nitrogen-stressed watersheds on both sides of the canal are raising questions, some of which surfaced Tuesday night when Environmental Partners updated sewage officials on the progress of a Bourne Comprehensive Wastewater Management Plan (CWMP).

One question concerns the cost to property owners of installing new technology sewage systems. Sewage Commission chair Mary Jane Mastrangelo said the issue would be raised at future meetings. Bourne’s Board of Selectmen also serves as the Sewers Commission.

“To do that, we need good science,” Andrews said. “That’s a question the health department wants to hear shortly. It would be helpful if the data source used was attached to the (CWMP) document; to know the studies used to create the (watershed) districts.”

Kathryn Roosa, senior project engineer at Environmental Partners, told the commission that everything undertaken in the CWMP work focuses on “sound science” and that the watershed mapping is based on the Massachusetts Estuaries Project of Impaired Embayments. She said the watersheds now delineated are based on hydraulic mapping approved by the Cape Cod Commission in its regional planning update.

Pocasset’s Bob Dwyer suggested Environmental Partners approach the Joint Base Cape Cod office, which has long been involved in restoring drinking water to the upper Cape, to determine the region’s hydrology.

What about the rising sea level?

According to Mastrangelo, Environmental Partners’ concepts of required septic upgrades in watersheds are focused quite heavily on off-shore areas, such as Monument Beach, where the Phinneys Harbor watershed is mapped to include properties toward Route 28 (MacArthur Boulevard), more than two miles from the port .

Mastrangelo said she is more interested in “coastal concepts” and how rising sea levels and other factors could create the potential to choose not to plan “innovative alternative” sewage systems there.

She also asked how coastal septic improvements to remove nitrogen from wastewater flow can be dovetailed with Bourne’s climate resilience planning.

More:The discharge of sewage into the Cape Cod Canal was again discussed at Bourne, despite earlier objections

Mastrangelo said there was an obvious need for a “phased plan” for septic replacements and retrogrades.

Will there be workers installing new systems?

Pocasset’s Keith Barber asked about the labor required to install state-of-the-art systems. He warns of “supply and demand issues” that could push prices higher. He said some sort of Bourne summit could be useful to address potential issues with the need for septic workers.

Wastewater Commissioner Jared MacDonald said companies are now at work in the Cape installing systems. But he also conceded that if Bourne moves forward on the septic front, “there’s going to be a bigger boom.”

Mastrangelo said the recent OneCape Summit found that it was “logistically infeasible” to quickly meet the need to upgrade or “replace” septic systems in areas with delineated “total maximum daily loads” of nitrogen; notably Phinneys Harbor at Monument Beach and Squeteague/Megansett at Cataumet.

The plan could be presented to TM voters in May

Environmental Partners senior project manager Helen Gordon said a comprehensive three-phase wastewater management plan that may be presented for voter review at the May 2023 annual city meeting is “a living plan” that will not be implemented within a year and will succumb would change. She said septic changes, as they are now being explained to the general public for the first time, are “concepts based on an extremely conservative perspective”.

Gordon said the plan will include guidelines detailing funding for nitrogen removal projects in individual watersheds, costs to the community and issues such as a possible ban on lawn fertilizers.

She said there will be no conflict between Bourne’s proposed comprehensive wastewater management plan, as it is still evolving, and the new Massachusetts Title 5 law, which is due this winter.

Channel officials did nothing Tuesday night. The meeting was classified as a bureau workshop and served to assess the EP’s work to date.