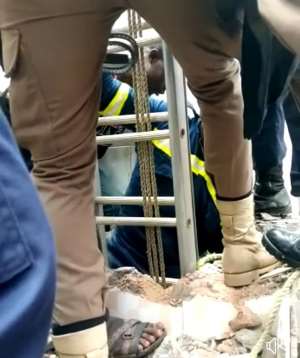 A three-year-old boy has died in Lebanon’s Zone 2 suburb of Ashaiman in the Greater Accra region after falling into an open septic tank in the area.

The boy fell into the septic tank while playing with his sibling.

Area residents spotted the boy’s slippers and play toy near the toilet pit, raising suspicions that he might be in the pit.

Those nearby began breaking up the pit and later called the fire department for help.

The crew rushed to the scene and drained the sewage to gain access to the victim, and after 26 minutes the men used a ladder to descend into the pit to recover the body.

The body was taken to Trinity Hospital in the area by parishioners, but medics pronounced the boy dead on arrival, according to GNFS.

A preliminary investigation revealed that the 3-year-old boy accidentally fell into the open septic tank, drowning and suffocating.

GNFS has therefore advised parents to keep an eye on their wards while playing and to cover any open septic tanks/pits that are not in use to prevent a repeat of this unfortunate incident.

Water Sink Market is attain a CAGR of 7.2% during the forecast period to 2028