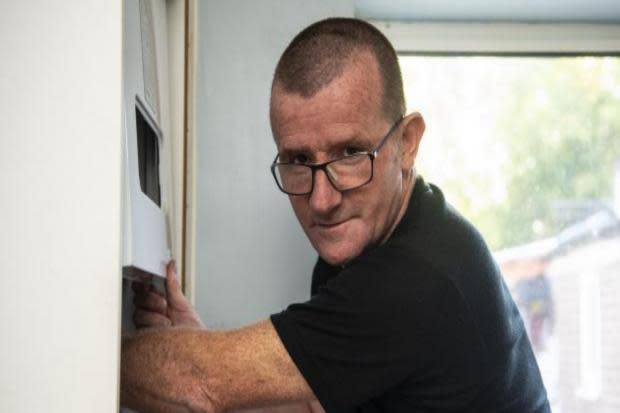 BURNLEY’S local hero was once again recognized for his services to the city as he accepted a gong at the Pride of Manchester Awards yesterday.

The Awards were back and in person to honor the unsung heroes of Lancashire and Greater Manchester and celebrate the ordinary people who have done the extraordinary.

Hosted by actor Kym Marsh, the awards were presented at a prestigious and star-studded event at The Kimpton ClockTower Hotel in Manchester last night.

The last two years have shown that recognizing and rewarding the people who go the extra mile to make a difference is more important than ever.

This year plumber James Anderson, 52, from Burnley, was announced as the winner of a Pride of Manchester Special Recognition Award for giving £1.2million to vulnerable people to keep them warm.

James was a successful heating contractor when he came across an elderly customer who had been scammed.

The gentleman had been left without heating or hot water by a scammer who tried to charge him £5,000 for a new boiler.

Enraged, James arranged for his heater to be fixed and then set out to protect other vulnerable people and help those who can’t afford it.

He founded the nonprofit Depher, which provides free or heavily subsidized services to keep people warm and safe.

Since 2017, he and his team have helped more than 39,000 families, notably with free boilers, emergency plumbing and heating services, free bathrooms, funeral expenses and surprise birthday parties for children in and around his hometown of Burnley.

Between 2020 and 2021, they delivered £60,000 worth of PPE and food to families, care homes, frontline workers and emergency services at the height of the Covid-19 pandemic.

He has now closed his own profitable plumbing and heating business to work full-time on the project.

James remembers a family that inspired him, a young couple with two young sons.

“They were freezing,” he said.

“Two engineers had already charged £40 each without fixing the problem. The family could not afford any more repairs.”

James fixed the boiler for free. “The mother sat there and cried,” he added.

“She said to me, ‘All I want is to keep my kids warm.’ I realized that you can walk past a house and it can look normal.

“But you don’t know what’s going on inside. Of the people we help, 90 percent live below the poverty line without telling anyone.”

James has a different, personal motivation. He and Babs lost their baby son William in 2011 when he was just 16 weeks old.

“I promised him the day we shut down the machine that I would be the man he wasn’t going to grow up to be. I know he’s up there on a cloud, kicking his feet and saying, ‘Nice dad.’

Charlie Briggs, former Mayor of Burnley, said: “James is an amazing person, I wish there were more people like him.

Ann-Marie Holliday, manager at Depher added: “James is well known in Burnley. He loves helping people and has a big heart.”

Previously, a number of Pride of Manchester winners were recognized nationally at the Pride of Britain Awards, which will be broadcast on ITV in the autumn.

Since the inaugural Pride of Britain Awards in 1999, royalty, prime ministers and hundreds of leading figures from show business, sport, politics and the arts have attended.

Last year the Pride of Britain honored the winners of the Pride of Manchester 2021, Burnley boys Freddie Xavi and Hughie Higginson.

Best friends Hughie and Freddie captured the hearts of the nation and served up two of the most unforgettable TV moments of 2021 as they were surprised by Ant and Dec and then stole the show with singing sensation KSI.

The couple received the Good Morning Britain Young Fundraiser of the Year award for raising more than £200,000 after Hughie was diagnosed with leukemia and Freddie promised to help him thank his doctors and nurses.

Kym Marsh said of the winners: “It’s so exciting to be back in Manchester for a full live awards ceremony for the first time since 2019.

“The winners are incredible – they truly embody all the qualities that make us so proud to come from this incredible region.

“They are so selfless and brave and of course the kids will melt your heart. I can’t wait to meet them all.”

This Hack For Cleaning Your Garbage Disposal Is Going Viral

Things to look for in a Profesional Plumbing Services – shares Plumb Tech, a 4-times…