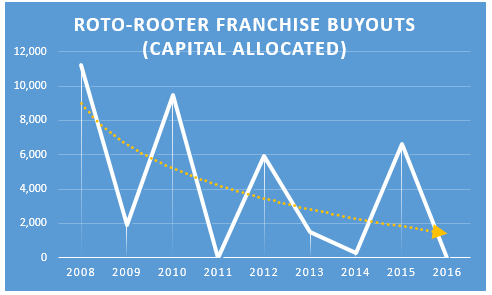 Admittedly, the idea for Chemed (NYSE:CHE) to spin off Roto-Rooter is as ancient as the runaway bull market of the past eight years. Hedge funds have been calling for the spin-off for years, one of the earliest examples being MMI Investments all the way back in 2009. I can’t disagree because logically, the move makes plenty of sense. Is it really in shareholders’ best interest to own a consolidated entity that provides both hospice and palliative care while at the same time also managing a business line that offers plumbing and drain cleaning? That is a tough sell to anyone.

Management has been stubborn in avoiding the inevitability of making this move. However, at the current stage of the market, I believe now is the time to unclog the pipes that are restricting shareholder value (you weren’t going to make it through this research without a plumbing joke or two) and spin off Roto-Rooter into its own entity.

Setting The Framework For A Spin-off; Management Is Aboard

Unlike plenty of spin-off situations, management does not need convincing that a split would be a logical move. Chemed has always been clear that it is not opposed to a separation; in fact, it has even structured the company in a way to facilitate that transaction:

“We agree with the statement in your [hedge fund MMI Investments] letter that ‘a spin-off of one of Chemed’s businesses would be relatively simple…given Chemed’s discrete operating structure and minimal shared resources’; however it is important to note that this statement is true only because the Board has already positioned Chemed’s businesses to facilitate such a separation. Although we firmly believe that our two businesses are currently more valuable to stockholders together than apart, due to our foresight and planning, we are well-positioned to separate the businesses if and when the time is right.”

For once, investors don’t have to do any convincing! Chemed has spoken with advisors often about whether a spin-off makes sense for the business, and I think this excerpt from a 2009 inquiry into the matter is also important:

“Value creation through a spin-off is dependent on either strong capital markets with demand for small-cap stocks or a vibrant M&A environment. Based on our analysis, current stock market valuations and, as you termed it, the ‘moribund’ state of M&A, we believe that creating two smaller companies could be value destructive to our stockholders.”

Obviously, in 2009, equity markets were obviously in much more dire straits. But, today in 2016, would anyone say that we have “moribund M&A” or “weak small cap demand”? The Russell 2000 is up more than 15% year-to-date, and 2015 and 2016 will go into the record books as the largest two-year period for M&A deals in market history. The environment is clearly there.

Management has been more transparent over the past year despite the fact that the question has not really arisen in any quarterly conference calls lately. In order for a deal to take place, Chemed has laid out some checkboxes it is looking to mark before considering a move:

Those points are quite easy to address one by one. The first issue (arbitrage buying) relates to the company’s moves in buying out franchisees over the past 10 years. As the company has grown, cost of capital has come down, and Chemed has seen a fair amount of value in buying out franchisees and folding operations back under its own umbrella. The company usually acquires these businesses at 4-5x EBITDA, and given the consolidated company trades north of 11x, these deals obviously are quite accretive to the bottom line. However, these deals are moving south.

First off, I’d say this has never been a large driver of growth. Chemed has spent less than $40M over the past nine years on these kinds of acquisitions, and while certainly they are favorable, they aren’t a key driver of underlying earnings. At management’s guided buyout price (4.5x EBITDA at the mid-point), these acquired businesses probably contributed less than $15M of EBITDA in 2016, just a small portion of Roto-Rooter’s $105M in likely 2016 EBITDA. Also, it is also clear that transactions have been on a steady downtrend since 2008, the spike in 2015 notwithstanding.

Points two and three relate to VITAS specifically, and its health as a standalone entity. VITAS is much more capital intensive than Roto-Rooter, and has a much larger asset base to maintain. Proceeds from a spin-off to the larger entity (in this case VITAS) would provide the business with solid working capital to run its business. It wouldn’t be surprising to see Roto-Rooter spun out with half the current net debt burden ($50M) and $100M in net proceeds payable to VITAS as a standalone entity. This would allow VITAS to begin its life on its own debt free (if it chose to pay down) and a $50M cash balance to work with while keeping leverage at Roto-Rooter at under 2x net debt/2016 EBITDA.

This would put it within the pure-play homecare and hospice business like Addus HomeCare (ADUS), LHC Group (LHCG), Almost Family (AFAM), and AMEDISYS (AMED), many of which trade at steep valuations, largely because of the attractiveness of the industry amidst rampant consolidation.

With the VITAS business expected to post $156M in adjusted EBITDA for 2016 ($170M in EBITDA, allocating $14M of $20M in unallocated corporate EBITDA expense to the VITAS business), the company is easily a $1.8-2.0B business on a standalone basis based on comps, and worth a touch more if acquired. Not bad considering the initial cost of VITAS when it was acquired by Roto-Rooter in 2004; $520M.

Remember that Chemed trades at $2.5B enterprise value on a consolidated basis. Even at the low-end of the VITAS business valuation ($1.8B), the Roto-Rooter business is worth substantially more than $700M. The Roto-Rooter will generate $95M in segment EBITDA in 2016 ($89M allocating the remaining corporate overhead expense).

Given the relatively low cyclicality of the business (revenue remained flat from 2007 to 2009, similarly little volatility in margins), investors would be more than happy to pay a hefty premium for the company on a standalone basis. There are no real comps to Roto-Rooter, but it has more in common with consumer staples companies like Clorox (CLX) (14x EV/EBITDA) than something like commercial facilities maintenance companies like Fluor (FLR) (8x EV/EBITDA).

In my opinion, Chemed’s current valuation values both businesses at the low end of fair as separate businesses. A spin-off likely could unlock 20-30% for shareholders once the market is given the opportunity to value both companies as independent entities. At this juncture, there is enough appetite in the market for these companies to survive independently, or, if management desires, for one of the two businesses to be sold off into a market with substantial appetite for acquisitions. I think it is time for management to finally concede that it is time to separate, and believe any review management conducted would show this would be a favorable move for investors currently.