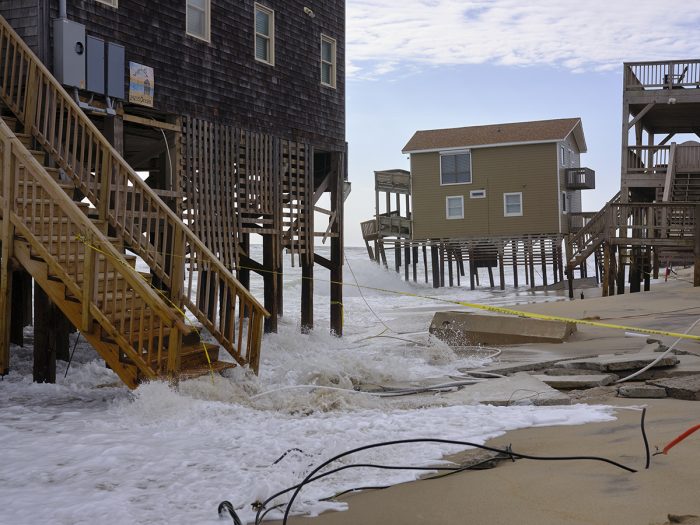 The state’s Coastal Resources Commission, at its meeting earlier this month, postponed until next year any decision on proposed new sewage system rules for coastal structures, changes drafted in response to recent sewage spills from erosion-prone homes on the Outer Banks.

The commission met in Beaufort on November 10, following the Department of Coastal Management’s recommendation to wait until February to allow for more public input and to hear from an interagency group that first met in August. The group consists of state and federal officials and others working to address issues related to erosion-prone structures and discussing proposed rules for replacing and relocating sewer systems seaward of the ocean vegetation line.

Three homes have plunged into the ocean this year at Cape Hatteras National Seashore in Rodanthe, one in February and two on May 10. Since then, park officials have identified 33 exposed septic tanks and drainage fields along the erosion-prone stretch of public beach. Parks Service officials have worked with 24 homeowners to get them to move their homes.

Related: A cycle of septic repairs, washouts on valet beaches

Department chief Braxton Davis chairs the interagency group and asked the commission to postpone a vote on the proposed rule changes. Davis said he expects to return with new information in February.

“Over time, even with setbacks for new construction, seashores can erode to the point where public beachfront buildings are at imminent risk of erosion, including septic tanks in some areas,” Davis said in an email Response to Coastal Review after meeting. “This is a concern for the department and for other agencies and local governments. Delaying action until the CRC meeting in February gives employees an opportunity to consider the public input received so far.”

The proposed changes include clarification of existing rules, including a stipulation that any new sewage system must cope with seafront primary structure setback. Another change would clarify that a publicly-funded sewage system needs to cope with the sea-side setback, while a private-money-laid system that cannot cope with the current sea-side setbacks must move as far inland as possible from its current location must be relocated.

Mike Lopazanski, chief of policy and planning, said during the meeting that the sewage system must be inland from the home or furthest from the ocean on the property, not adjacent to the home.

Department staff suggested changing the “development permitted within sea-side setback” rule to add relocated or repaired/replaced sewage systems. This rule allows certain types of development seaward of the sea-back setback, but does not include sewage systems.

The interagency group is scheduled to meet in December, Lopazanski said.

“One of the things that we want to do, once I get a response from all of you, is get that rules language out to them to address this particular erosion-prone structure issue,” Lopazanski told the commission.