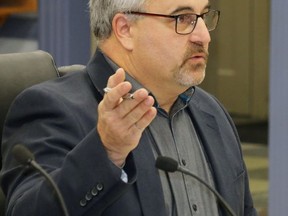 The City Council awarded Sewer Technologies Inc. a contract for closed-circuit camera inspection of underground infrastructure throughout the community during Tuesday’s meeting.

“The camera inspection program covers approximately 185 kilometers of sewers, of which we have completed 47 percent to date,” said Patrick Seguin, director of growth and infrastructure for the City of Timmins.

“That’s a pretty good number, and we’re getting some really good data from this camera inspection work.

“We’ve added inspection of our storm system and are fairly new to filming our storm.”

Seguin noted that the city had received five submissions for the tender that was issued, with bids ranging from $323,000 to $546,000.

Each of the offers was evaluated, with a maximum score being awarded for each of the following categories: understanding of the objectives, 10; Company qualification/experience, 15; qualifications of team members, 15; Approach and Methodology, 15; work plan, schedule and effort, 15; and fee proposal, 30.

Sewer Technologies Inc. scored 60.2 points, the highest among the bids received for the project.

“We’ve dealt with them before,” Seguin said.

“Part of the camera inspection is grading the pipes, so they give us a report and we use a standardized grading system so it can feed directly into our asset management plan and develop our priorities for the next few years.”

Seguin stated that the budgeted amount for the project was $365,000.

“We’re going to reduce the margin to stay within budget and cut some of the roads, the less critical ones on the list,” he said.

“Since the report didn’t provide a breakdown, were there areas where they didn’t get a higher grade that we should be concerned about?”

Seguin said: “I did not evaluate the proposals myself, they were evaluated by staff.

“This was the highest-scoring proponent, so I think some of that is subjective. You compare one submission with the others.

“The price is added, that’s another 30 marks.

“Again, I don’t think this is a reflection of her work. We have worked with this company before and they did a very good job.

“I don’t think the number is as important as the ranking.

“It’s a fair way to get a good product, because a low bid isn’t always an indicator that you’re getting good value for your money.

“When we evaluate in this way, we find that when you look at its technical value, the company’s experience and the methodology, sometimes a company performs better on the technical part, but at a really high price.

“So this balances getting a good, solid technical quote and keeping an eye on the financial part.”

district 5 district. Andrew Marks wondered if they would be able to make up any shortfalls by bidding on other under-budget projects if work could be extended.

Seguin said: “We are very pleased with the progress we are making on the sewers.

“I think we started doing that in 2018, maybe a little earlier, and in four years we’ve been able to achieve camera inspection of 47 percent of our inventory.

“We have to remember that we’re basically starting with the oldest inventory and working towards the newest, so at some point we can start reducing the amount we spend on camera inspections because we already know the worst-case scenarios.” have started to be done with (close to) 50 percent.

“So we’re pretty happy staying on budget and maybe spending it on repairs instead of further inspections.”

Given the number of roads to be included in 2022, Ward 4 Coun. John Curley wondered when work on the project would begin.

“I could be wrong, but I think it’s going to take a while,” he said.

“And will some of that affect what we’re going to do on Algonquin (Boulevard, Connecting Link project)?”

Seguin said: “To answer the first question it would certainly have to be after tonight if approved but this level of work is pretty much what we do every year and the contractor is easily able to do that work to do.

“If you think about it, we’re putting cameras on 47 percent of the infrastructure, we’re dealing with roads that we did four years ago.

“The things we photograph today won’t be on the list for a long, long time.

“The camera inspection precedes the repair by far. We didn’t fix 47 percent of the infrastructure.”

“Regarding the completeness of the presentation, if we use a rating system, if there is anything else we could add that would help in understanding the selection of the offer,” he said.

Seguin said: “We obtained a legal opinion and as this is an RFP (Request for Proposals) process that is evaluated internally by staff, we are delivering exactly what the legal opinion suggests.

“In the past we’ve had proponents ask, ‘Why did I get this score on this?’ and that only opens up a debate and begins to question the integrity of the members evaluating the proposals.”

Postmedia strives to maintain a vibrant but civilized forum for discussion and encourages all readers to share their views on our articles. Comments may take up to an hour to be moderated before they appear on the site. We ask that you keep your comments relevant and respectful. We’ve turned on email notifications – you’ll now receive an email when you get a reply to your comment, there’s an update on a comment thread you follow, or when a user you follow comments follows. For more information and details on how to customize your email settings, see our Community Guidelines.