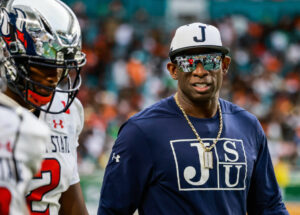 Jackson State head coach Deion Sanders can’t quite wash away the memory of used toilet paper sitting on his throne.

Can you blame him?

Sanders, who refers to the toilet paper stationed at the JSU facility as “loot paper,” wants his JSU players to start cleaning up after they’ve cleaned themselves. And if not? Well, they have to hold it until they find someone else’s china to pounce on.

That was the message Prime Time preached at a meeting with its players earlier this spring.

“If you go pee and someone leaves their booty paper on the toilet? I have a problem with that,” Sanders said. “How hard is it to take your loot paper and just throw it down the toilet and flush it?”

The man is right.

Sanders went on to explain what we all know about what happens next: “The next person that comes into the bathroom has to touch your loot paper and put it in the toilet for it to flush. I have a problem with that.”

Neon Deion’s problem comes with a trainer-made fix that could result in some nasty tiger bubbles. “I’ll just lock the whole toilet (next time he finds loot paper on the seat) and that will minimize your toilets.”

In fact, Sanders is less than thrilled that one of his players has accessed his personal plumbing.

“This kind of got me. I have a bathroom that I feel like is my bathroom because I’ve claimed it,” Sanders recently told his team. “And I plugged it in. It is very nice.”

Coach Prime then shot a video of his personal JSU bathroom.

“Who would walk into this bathroom knowing that no other bathroom looks like it (within the facility) and feel free?” Prime asked rhetorically.

Sanders pointed to a red binder seen on video left in his bathroom. Moments later, an associate handed Deion the folder in question so he could identify the bathroom bandit in front of his teammates. The Tigers players roared with laughter and even made Coach Prime smile.

Apparently the only thing Sanders couldn’t lock was his own bathroom.

Who would have thought?

The unidentified Tiger then made his way to the front of the room to greet Sanders and retrieve his red binder. Sanders responded by telling the player, “I hope you had a good dump.”

Jackson State probably won’t release an official depth chart until the week of their season opener (September 4 vs. Florida A&M), but it’s safe to say the Red Folder player is listed for his No. 2 position.