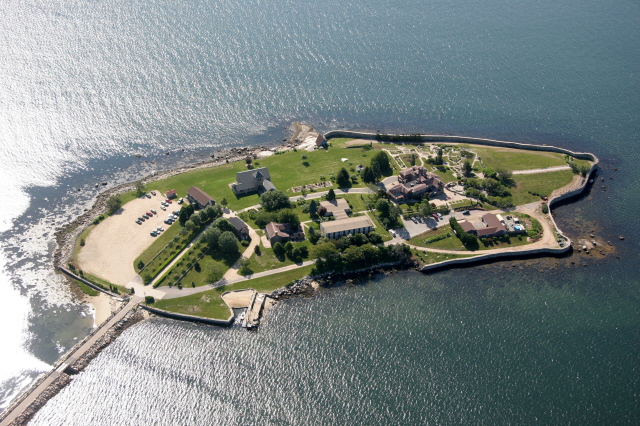 STONINGTON — St. Edmund’s Retreat, an addiction recovery program on Enders Island that has faced years of opposition from neighbors and an heir to Alys Enders, will go to a hearing on Wednesday to discuss plans to fund a new sewage system through an intended Discuss block grant for affordable housing development.

Neighbors and an heir of Alys Enders say the plans for the retreat are contrary to the will of Alys Enders, who bequeathed the property for novitiate formation or as a retreat for priests from the Diocese of Norwich.

The hearing, scheduled for 6:30 p.m. Wednesday at the City Borough Office, 40 Field Street, Pawcatuck, is being held by the Board of Selectmen to solicit public input on the $600,000 Community Development Block Grant.

Susan Cullen, the city’s director of economic and community development, explained that the retreat qualifies for the affordable housing benefit because program participants earn less than $10,000 a year, which is below the 25 percent threshold for that average area income.

“All the boys in our recovery community have no money and we can take care of them through fundraising and generous support from people. If they weren’t with us, they’d probably be out on the street somewhere because they’ve been through detox and rehab,” he said. “Our program helps them repair the debris of their past and shows them the way to a healthy, balanced and productive life.”

According to the grant application, the purpose of the project is to repair parts of the existing system vulnerable to storm surges and replace it with a centralized, advanced sewage system that will significantly reduce nitrogen and pollutants.

Hoar said the $1.25 million septic system will be funded through a combination of grants.

But according to neighbors, the retreat holds business meetings, seminars and parties on the island in violation of Alys Enders’ will, which included two documentary restrictions: that the property be used solely for novice training or as a retreat for priests from the Diocese of Norwich.

Hoar said the nearby Masons Island Yacht Club hosts large events and weddings that last late into the evening, but the neighbors who are suing the retreat have not filed a complaint against the club.

The group of neighbors, who are likely to take the matter to court next year, disagreed with a 2017 report from the city’s planning department and Jason Vincent, the city’s planning director at the time, concluding that the retreat was legally noncompliant, prior use . The group also disagreed with the city’s 2018 decision by the City’s Zoning Appeals Committee not to hold a public hearing on the group’s objection to the report’s conclusions.

Additionally, Hoar said, the retreat’s 700-foot levee replacement project is on hold due to litigation.

In order to move forward with the project, the Army Corps of Engineers needs clear title title to the property, but the heirs have retained reversionary interest rights. The retreat center received eviction claims from 33 heirs — leaving the Girls Scouts of America, Mystic Seaport, and a great-grandnephew, John Steffian Jr., as remnants.

Hoar said the withdrawal came to an agreement with the Girl Scouts and the Seaport, each getting their 1.25 percent if the island is ever sold for a profit.

But the great-grandnephew, who owns 3.125 percent of Enders’ estate, has refused to sign a receipt and the matter will go to trial in the Court of Complex Litigation in Waterbury in December, Hoar said.

“The dyke was never built – we are still waiting. The Army Corps is ready to move forward as soon as we have 100 percent,” Hoar said.

The Best Kitchen Faucets of 2022

6 Common Plumbing Problems That Could Plague You This Fall