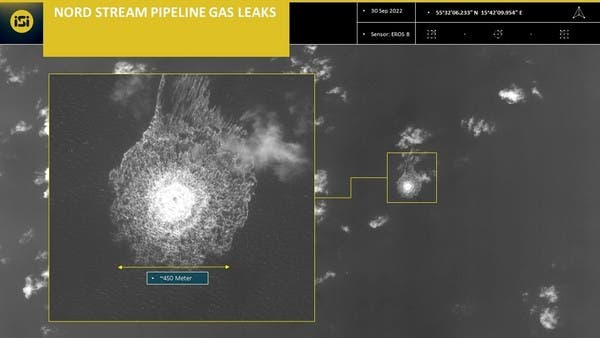 At least 50 meters of the Nord Stream 1 pipeline was destroyed or buried under the seabed after an explosion was believed to be the result of sabotage, underwater images released Tuesday showed.

Danish police, meanwhile, said their inspections of Pipelines 1 and 2 in Denmark’s Baltic Sea Economic Zone confirmed the damage was “caused by powerful explosions”.

A massive crack and twisted metal on the Nord Stream 1 pipeline 80 meters deep in the Baltic Sea can be seen in videos published by the Swedish newspaper Expressen.

For the latest headlines, follow our Google News channel online or via the app.

According to Expressen, videos shot on Monday show how over 50 meters (165 feet) of the pipeline is either missing or buried under the seabed, and long cracks can be seen on the seabed leading to the pipe rupture.

“It’s just an extreme force that can bend metal that thick like we see it,” Trond Larsen, drone operator at Norwegian company Blueye Robotics, told Expressen.

Larsen, who piloted the submersible drone that captured the video, also said you could also see “a very large impact on the seabed around the tube.”

The two Nord Stream pipelines were damaged by explosions under the Baltic Sea in late September, causing four leaks.
While the leaks were in international waters, two of them were in the Danish exclusive economic zone and two of them were in Sweden.

Swedish authorities announced on October 6 that they had conducted an underwater inspection of the site and collected “evidence” and that the inspection supported suspicions of probable sabotage.

Meanwhile, Danish police said on Tuesday they had carried out several inspections of the leaks in the Danish zone together with the PET intelligence agency.

“The inspections have confirmed that Nord Stream 1 and 2 in the Danish exclusive economic zone suffered significant damage and that the damage was caused by powerful explosions,” it said in a statement.

Danish police also said a joint investigative team was being set up with PET to continue the investigation, but it was too early to say what international cooperation with Sweden and Germany would be possible.

The pipelines linking Russia to Germany were at the center of geopolitical tensions as Russia cut off gas supplies to Europe in alleged retaliation to Western sanctions over Moscow’s invasion of Ukraine.

Although the pipelines were not in operation, they contained gas before falling victim to the apparent sabotage.