Fixing a choking drain no game of softball 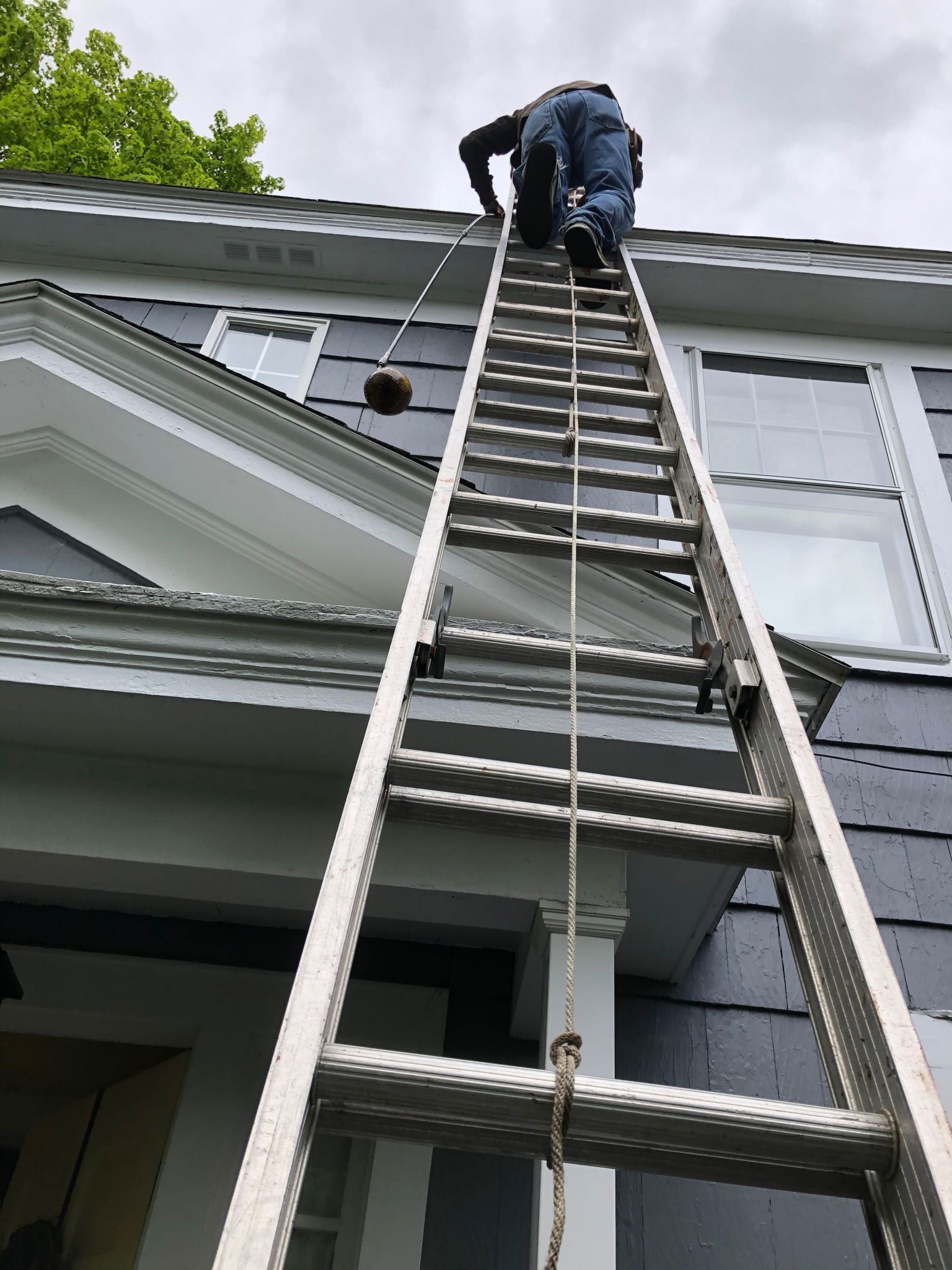 We moved into our Schenectady fixer upper in 1985 and since then we’ve worked almost every square inch at least twice, but one annoying problem stayed high on my household list.

The upstairs bathroom drains kept running slow no matter how many bottles of Liquid Plumber I put in. Most annoyingly, when we flushed the toilet, a loud, guttural, choking sound echoed through every drain in the house.

When I asked the many plumbers we’ve had for other repairs over the years, they all called simple physics: drains need air to do their job. Something was blocking the air supply.

Usually this air comes through a roof vent, which in our case is a 4-inch cast pipe that protrudes over the bathroom. But as sure as they knew the cause, none of the plumbers wanted the job, which would have meant climbing the rather steep roof of our 2½-story house and running some sort of root canal on our main drain.

Such clogs usually come from leaves building up or, God forbid, the carcass of a squirrel. Since there are no trees near our shaft, we were stunned, with the exception of one external theory that struck these plumbers as a bit far-fetched.

In 1987 our eldest son Jamie got a softball for his 12th birthday. He and I liked to play a modified pitch-and-catch by throwing the ball from the driveway below onto the roof and leaving it hanging where it happened to come down. One day Jamie reported that he hadn’t seen the spot where the ball came down. We searched everywhere, in the bushes, under cars and on the street, but no luck.

You can tell where this is going.

Fast forward to a day a few months ago. A local installer was introduced in a radio call-in-show that asked the expert. One caller described a problem similar to ours. The appraiser suggested going up on the roof and injecting a garden hose into the vent pipe. If the water comes back, you have a blockage. By the way, he said, his company could come and do the work.

The very next day I called the contractor and they sent Mike out, who the dispatcher assured me was their best drain guy. He listened, asked a few questions, and planned a roof inspection if he could bring a helper and a large ladder.

When the day came, Mike climbed the ladder and pushed a high-speed jet of water into our pile. Immediately the water gushed out again.

After the blockage was confirmed, Mike slowly worked the water jet and the water began to flow downwards. But soon the bathroom sink began to fill with rusty water from the centuries-old iron vent pipe. It overflowed and made a terrible mess in the bathroom and seeped through the floor and stained the ceiling below.

After some quick mopping up, the plumbers fitted a makeshift hose to catch and divert the current, and Mike continued spraying. Soon the water was pouring unhindered down the chimney and out through the sink drain. We all thought this meant the obstacle was removed. I blushed with anticipation. The loud choking sound was not gone. In fact, it felt even louder to me. Had we made the blockade worse?

Next, Mike lowered a videoscope into the pile. Minutes later, his colleague, who was watching the screen, called, “Hey, there’s a baseball in there.” On his screen one could clearly see the seams of the ball and read the word “Official”.

It’s actually a softball, I told them the story.

Could it just be caught with a long rod and pulled out?

Not that easy, they said. The whole jet of water had apparently moved the ball and was now completely clogging the sink drain. The best solution, they said, was to cut open the wall in the adjoining bedroom to cut out the cast iron section that contained the softball, and then repair it with conventional PVC.

Reluctantly, I planned her next visit. To save some money, I told them I would cut the hole in the wall and then plaster it over.

My wife Debi was skeptical and asked us to get a second opinion. So I called Rich, a plumber friend who’d fixed our oven a few years ago. He was fascinated by all of this and offered to see it.

Rich pulled the toilet and used a video scope to locate the ball. He tried to push it up and down with a plumber’s snake, but no success. Since it was now Friday afternoon, Rich asked for a weekend to think about his next move.

On Monday morning, Rich showed up with a ladder and a tool he had made by welding a large screw to the end of a long, three-piece rod that was used to clean chimneys. I held the ladder as he climbed up, snapped his pole together, and began thrusting down the vent. No luck.
He came down and asked Debi for some vegetable oil and held out an empty Stewarts coffee mug. You fulfilled happily.

He went back to the roof, poured in the lubricant, swung his tools around a little, and began to turn. Slowly he raised the bar and with it came a 35-year-old, rust-covered, light green softball. Turns out it was one of those spongy nerf balls that likely make it easier to catch.

I loved it and started taking pictures of Rich as he was climbing down. It saves me from breaking down the bedroom wall and paying a small fortune to have my cast iron pipe cut up and repaired.

It was time to test the results. We went to the bathroom and I pulled the lever. Swisssshhhh! A normal, but very sweet, washing-up noise that no longer echoes around the house.

We’re grateful to Rich and Mike for going where no other plumber would have gone before them to finally fix an annoying problem in this old house.

The lessons here are that you need to maintain proper ventilation so that drains and toilets work properly, and when you have a job that nobody seems to want to do, keep trying. At some point you will find someone. It can take years!

A few weeks after our runoff episode, we flew to California to visit Jamie and his family for a long overdue visit that was postponed for more than a year by COVID.

We had a great time and by the way, I returned his ball.

Mike Spain is a former Times Union co-editor who retired in 2019 and spent a lot of time working on his old house during the COVID year.

We need to talk about your gas stove, your health and climate change