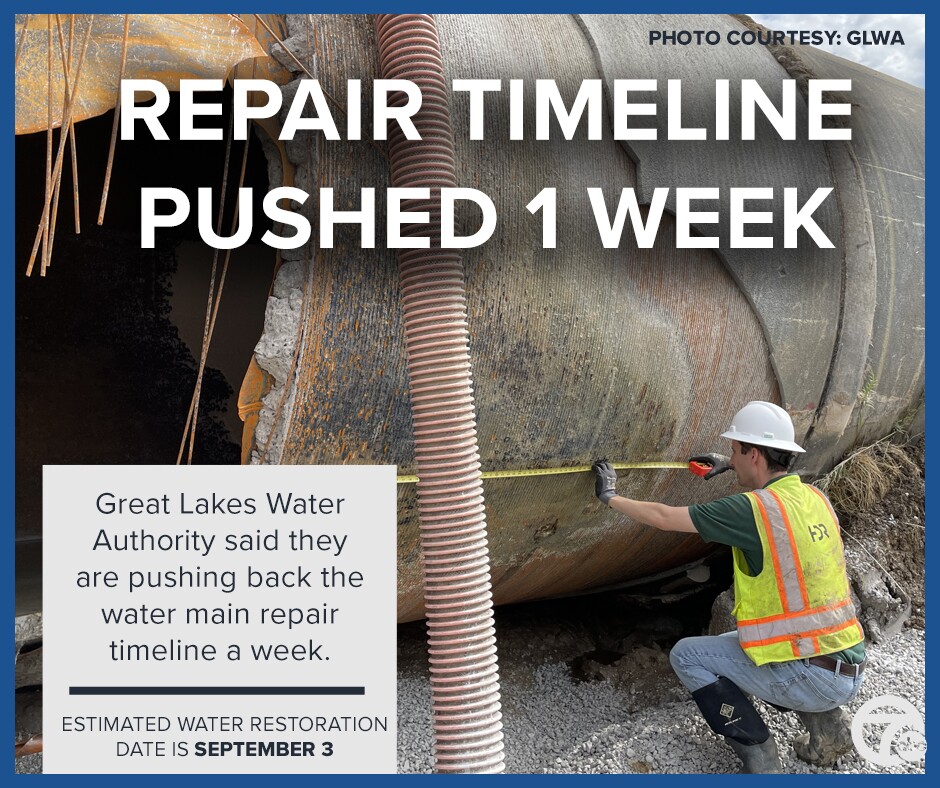 (WXYZ) — During a media update on Tuesday, the Great Lakes Water Authority (GLWA) announced that they are pushing back the water main repair schedule by a week, setting the projected date of the water restoration to September 3.

GLWA officials say they immediately ordered all 120-inch pipes they could get in the US after the first hiatus, but still need more parts to complete the repair. Another piece of pipe, which is now being manufactured, is expected to arrive on August 23rd.

“I know that adding an additional week to the repair schedule and the Boil Water Advisory will place further strain on residents and businesses in the seven impacted communities,” Suzanne R. Coffey, GLWA’s chief executive officer, said in a press release. “But I want them all to know that we are doing everything in our power to expedite this repair and get her back to full working order. We are also in discussions with affected communities as well as the Michigan Department of Environment, Great Lakes, and Energy (EGLE) about options to amend the current Boil Water Advisory as pressures have largely stabilized at reasonable levels. However, we currently have nothing definitive to report.” 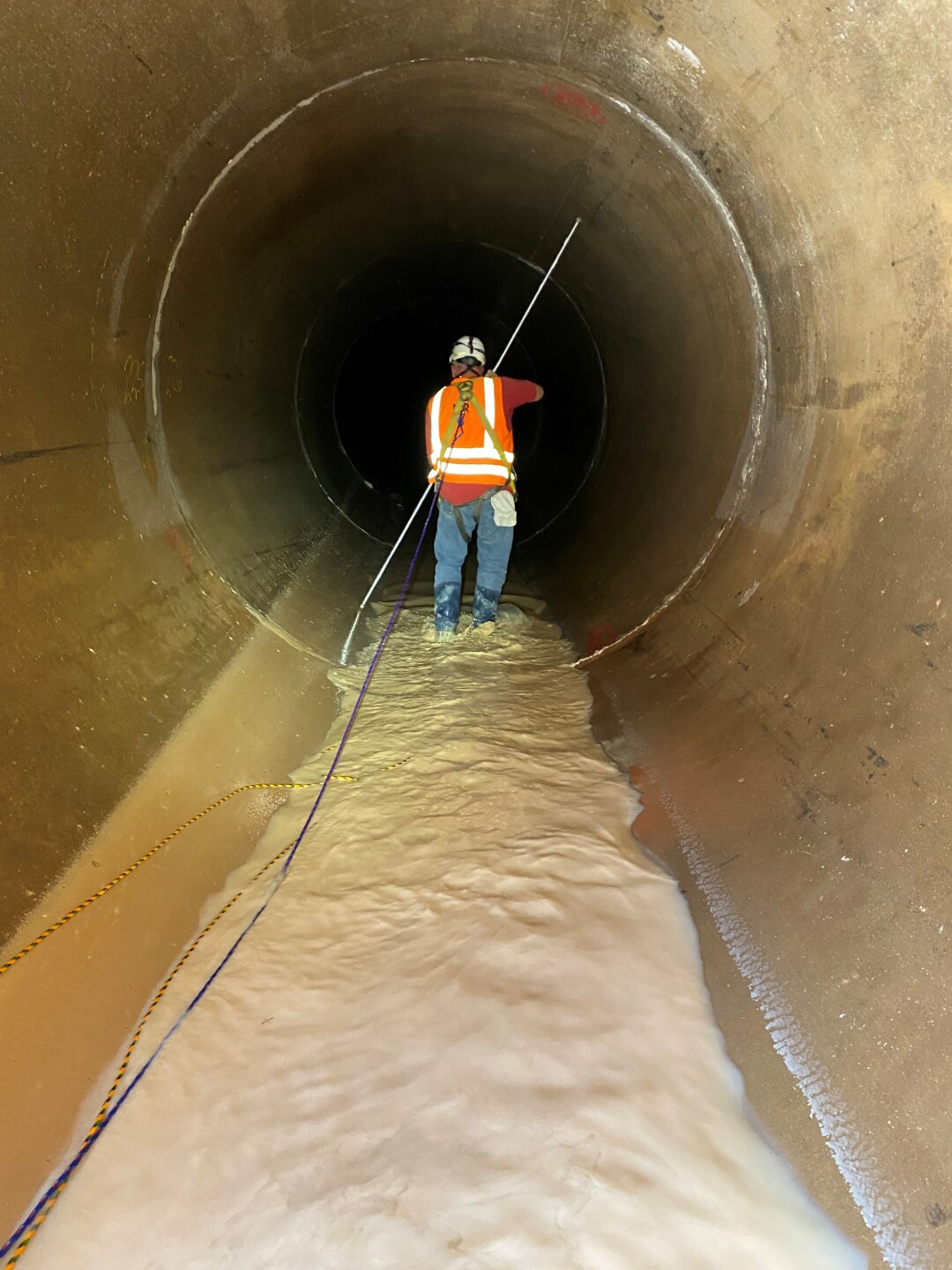 We are on day four of a boiling water advisory that is affecting more than 100,000 people in the Detroit area.

As of Tuesday, August 16, 2022, the following seven communities remain subject to a Boil Water Advisory: Almont Village, Bruce Township, Burtchville Township, City of Imlay, City of Rochester, Shelby Township and Washington Township. In addition, there is also a Greenwood corporation and an industrial park in Romeo that remain under the Boil Water Advisory. 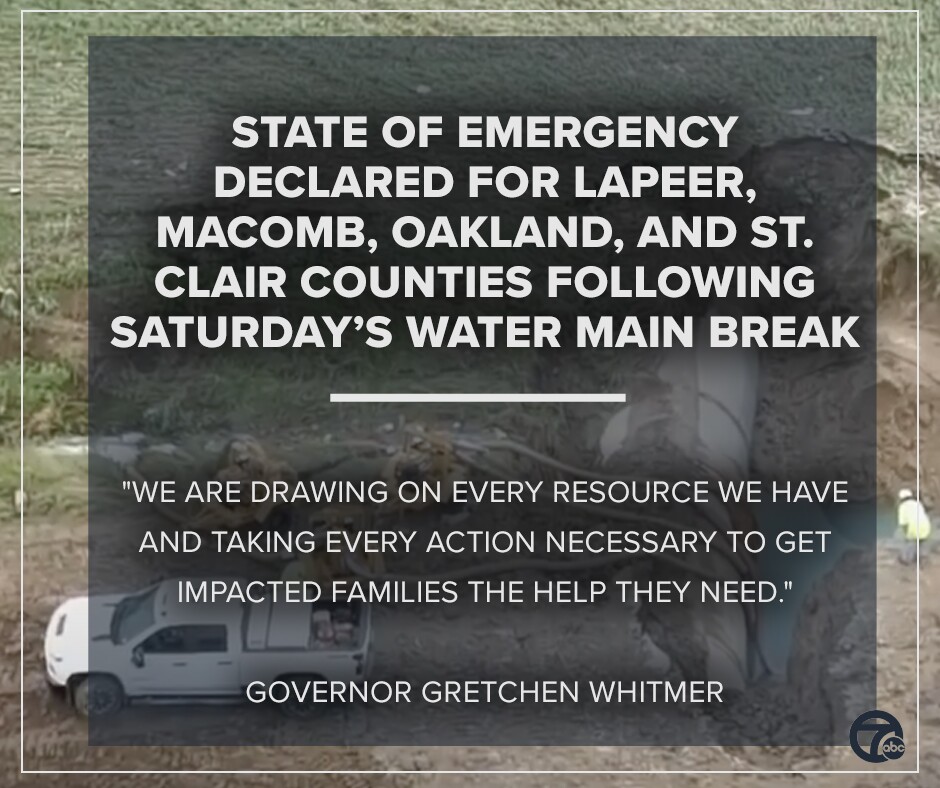 As crews wait for more pieces of the new pipe, officials say they will continue to conduct an inspection and condition assessment and gather as much information about the pipe as possible.

GLWA said inspecting water lines is challenging, noting that new technology should be able to help with future assessments while in use.

After the new pipe is installed, GLWA said it will undergo a pressure test before buttoning up the system and then a disinfection and flushing procedure before conducting two rounds of water quality tests.

These Boil Water Advisory FAQs provide more on what a boil water advisory entails, as well as the dos and don’ts during an advisory. Check GLWA’s website for updates on the current Boil Water Advisory and 120″ water line burst as they become available: https://t.co/XgkGcEHn88 pic.twitter.com/nw0VCacfX1