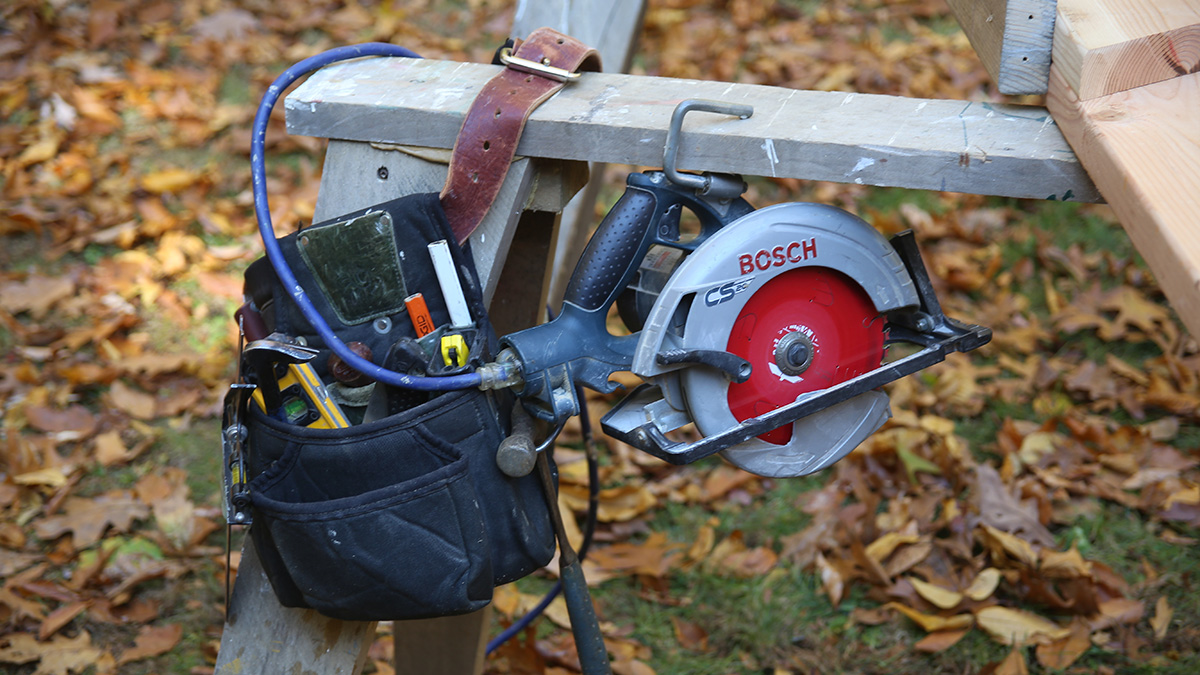 IIn 1979, right out of high school, I showed up for my first day as a house builder. I wore a $19.99 Sears tool belt filled with hand tools I looted from my dad. The boss put me in charge of Ray, a long-haired, Marlboro-sucking man with a bad attitude. He glanced at Dad’s 16-oz. Rocket Hammer and said, “Where did you get that thing? Your Playskool set?”

I worked with Ray just long enough to develop a thick skin and a critical attitude toward tools that didn’t work well or last long. With my first paycheck, I bought a blue-handled Estwing heavy-duty hammer. And in the decades since, I’ve spent thousands on professional tools from Makita, Bosch, Milwaukee, Porter-Cable, and more.

Two purchases I made in the early 1980’s were a Makita 7-1⁄4-in. circular saw and a Makita 10-in. miter saw. I still use both, although the circular saw is now a hammer used only for masonry and the miter saw only comes along on certain jobs due to its limited cutting capacity. Still, 35 years of service is pretty good.

I also bought a new saber saw around the same time. It still works, but I updated it last summer – or so I thought. My new saw definitely has more power than the old one, and the tool-free blade change is cute. But within a few months the new saw ended up in the shop for the warranty service I expected. Fett exited the orbit controls. The manufacturer refused to guarantee the repair, claiming that I had abused the saw, overheating it and liquefying the grease. My old Recip saw had endured the same level of abuse for 30 years, and it wasn’t leaking grease. And while I appreciate the performance and convenience of the new saw, I don’t want to sacrifice sturdiness and durability to get it.

I have similar complaints about other new tools. I bought a 3⁄8 inch. drill at about the same time as the saber saw. The keyless chuck locks in use to such an extent that a pipe wrench is required to open it. When using bits that are within the drill’s rated capacity, I can smell the insulation burning off the windings. This drill won’t even last the 10 years that its predecessor did, and this drill drilled thousands of holes in oak back then when I did installed banisters livelihood.

Even hand tools aren’t what they used to be. I’ve been in the craft since carpenters still trimmed by hand. I’ve set thousands of nails with one nail set and knocked out hundreds of hinge pins. I’ve lost more than a few sets of nails but I’ve never had a mistake. Not once.

About a year ago I bought a three pack of branded nail sets. They’re not used as often as nail sets were in the 1980’s, but they’re still necessary tools. I trusted the manufacturer and liked the rubber padding on her thighs. But not long after I bought them, the tips started shooting, making it difficult to pull them out of the wood after driving a nail.

I contacted a brand manager at the company about the issue. When he heard I had used a nail set to remove hinge pins he said I was abusing the tool. For real? By removing the hinge pins?

After 40 years in the craft, I’m fairly conscientious about the proper use and maintenance of tools. In other words, I’m much less likely to abuse a tool than when I started. I really don’t think I’m the problem here.

Tool companies and the markets they serve have changed dramatically since I got into the trade. There used to be a clear distinction between professional tools and DIY tools. Pro Tools were too expensive for the casual homeowner. Homeowners’ tools weren’t accurate enough, powerful enough, or durable enough to last on the job site. You bought home appliances from Sears, KMart or True Value. They bought professional tools from lumberyards or construction companies. Maybe you bought from a catalog and sent a check to Seven Corners Hardware. Today the latter is gone and local loggers are closing. Sears and KMart are one and on life support. Craftsman Tools, once the crown jewel of Sears, is now owned by Stanley Black & Deck. Everything is different.

The big changes started in the 1980s and 1990s when the DIY market exploded. Suddenly, many more DIYers were buying tools than professionals. As a result, more and more companies wanted to share in this bounty, including the old-line professional tool makers. It was at this point that the line between professional and DIY tools began to blur, and the Marketers invented the word “prosumer.”

The burgeoning home improvement market fueled the proliferation of The Home Depot and Lowe’s stores, which became the places people went to buy their tools, at least until the internet and Amazon showed up. At this point it was very easy to do comparison trades and price points became paramount.

Mergers, acquisitions and the global economy also changed the face of the tool industry. Today, a Hong Kong-based company, Techtronics Industries (TTI), owns Milwaukee, AEG and Ryobi, as well as the licensing rights to sell tools at The Home Depot under the Ridgid name. Meanwhile, Stanley merged with Black & Decker and produces tools under the DeWalt brand. It also owns Porter-Cable and Craftsman Tools. Trying to keep track of things drives you crazy.

The tool companies I remember literally sold out. They are now owned by international conglomerates powered by algorithms that maximize shareholder value and sell volumes of tools to anyone with a few bucks. Providing reliable tools to myself and other professionals no longer seems to matter.

Today, brand loyalty isn’t so much earned as it is drawn in with proprietary battery platforms for cordless tools. A company’s reputation used to be something it earned by providing quality goods and services. But now reputation has given way to branding. And you can simply buy a brand. That’s exactly what happened in 1992 when Black & Decker reintroduced the DeWalt name after realizing that customers no longer associated Black & Decker with quality power tools. And when TTI wanted a strong brand for its exclusive contract with The Home Depot, it acquired the rights to use the Ridgid name, which has been associated with professional quality plumbing tools since 1923.

But maybe I’m asking too much. After all, all the competition has one advantage: tools cost less. A new 7-1⁄4-in. A Makita circular saw from any of the big department stores costs less than I paid for the same saw in the early 80’s. When inflation is factored in, the fall in prices is overwhelming. In addition, the new saw has a built-in light. (Whoever started lighting work tools deserves a Nobel Prize.)

As more tool companies compete for our money, companies are constantly redesigning their tools, increasing performance and adding features to mutually benefit each other. The depth adjustment of my new Bosch router is in a league of its own. Impact wrenches coupled with new screw designs have changed the way I fasten just about anything. Saber saws and jigsaws have orbital settings that let them fly through cuts. Chainsaws have opened up a new world of accuracy on the job site.

More power, more features and less cost – too bad I also want durability. After all, planned obsolescence is nothing new. It’s been around since at least the 1920s, when the auto industry introduced model year design changes to boost car sales. And after 100 years of churn and consumerism, we’ve reached a point where the typical truck buyer cares more about the number of cup holders than the engine under the hood. I doubt most power tool users are more demanding.

What is surprising is that increasing competition in a market usually prompts manufacturers to improve durability. This happened to American cars after the Japanese started importing more durable cars in the 1970s. But that hasn’t happened with power tools, at least not in my experience.

I find that many tools seem to be designed to last about five years. That’s great for manufacturers and retailers, but terrible for consumers and the environment. Surely we can do better than fill our landfills with old power tools and dead batteries. And at least for professionals, cheap tools cost more than you think. My new saber saw may have cost as little as $25 to repair, but the half day I spent taking it to the repair shop and then picking it up cost me as much as the tool itself. This manufacturer works hard to make my regain trust.

Upgrading a new tool with lights and clutch adjustments while also switching to plastic gears to cut costs feels like a bait and switch. It lacks integrity, especially when done in such a way that a company can sell me a replacement in five years. I used to be able to rely on brand names to predict a tool’s quality and durability. But I’ve let down enough supposedly professional tools in the last three years that I’ve lost faith. It makes me both angry and sad.

It also makes me willing to spend more money and it makes me curious about the German company Festool whose products cost twice as much as other tool brands. I only own a few, but once I got used to their quirks, I’ve never been let down by them. Some are over 20 years old and still going strong. What is it about German craftsmen that they are willing to pay more for high-quality tools? If Festool is still around after 20 years on the US market, that might be a sign that I’m not the only carpenter in this country who wants to buy tools that his children can inherit.

Get your septic system checked – compliance is coming in June 2022

U.S. 18 near Wesley to close Tuesday, July 5 for roadway…

York County home with no plumbing hit with $1,200 autopaid…