Interior design: a taste of the tropics in Hackney | Interiors 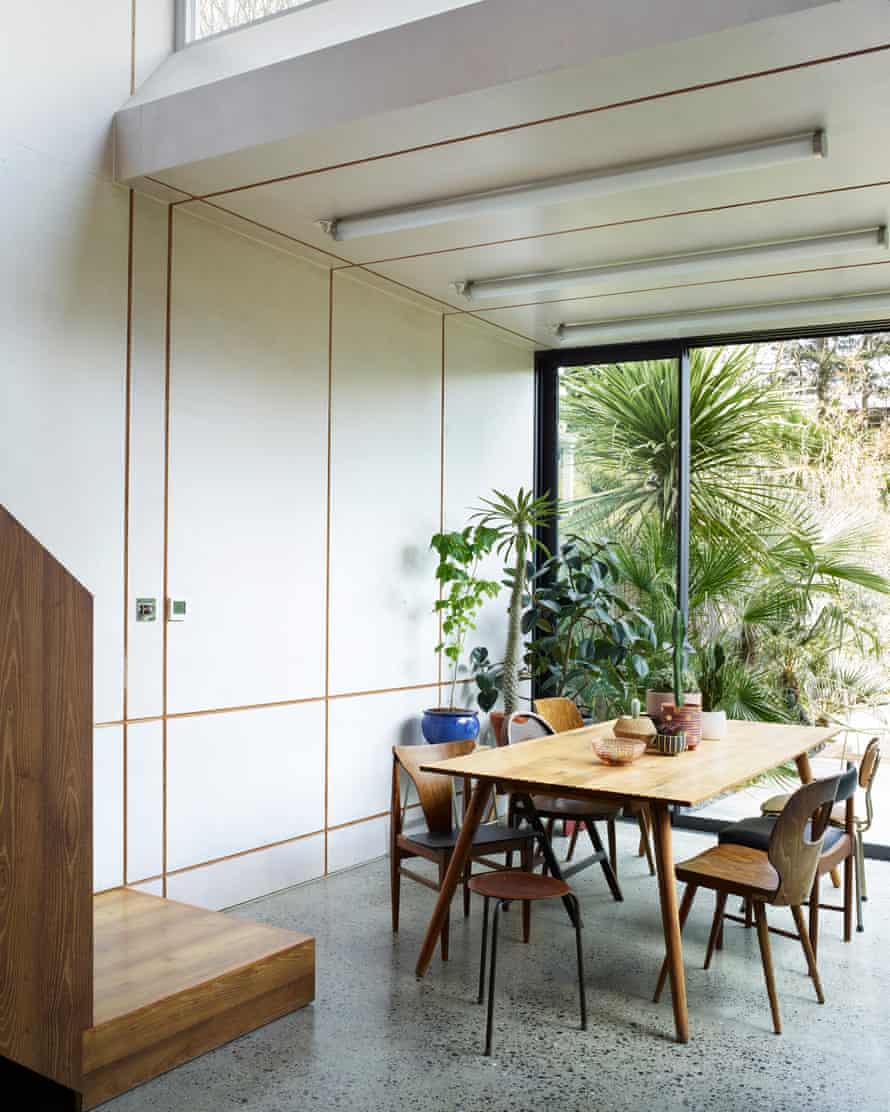 B.lue Curry has performed a balancing act on its Victorian terrace and tread a self-confident path between disorder and calm, color and neutrality, old and new. Curry found this place in 2012. After 12 years in a one-bedroom apartment, the artist felt the need for more space: “I really wanted a garden and enough space to unpack my many collections.” poorly developed two-bedroom apartments ”. Then he found this place in the same price range – an imposing four-story house overlooking Victoria Park in east London.

The catch? “It was an absolute wreck, with the windows falling out, no heating, and not a lot of plumbing or electrics – just extension cords snaking between the bedrooms.” Most alarmingly, there was a huge crack in the height of the house, “big enough to put your hand in,” Curry recalls with grim glee. “But there was so much potential, so much history. I’ve decided to dive in. “

Fantastic light: kitchen table with a view of the garden. Photo: Rachael Smith / The Observer

It helped that Curry knew a great couple of architects, old friends from his time at Goldsmiths College, Lara Rettondini and Oscar Brito from Studio X Design Group. “They had their own brilliant ideas, but they took many of mine too.” The rift turned out to be WWII bomb damage and was easy to sort out. It turned out that his entire row of houses had a similar impact when a bomb destroyed St. Mark’s Church at the end of the street. This large terrace overlooking the park was built to create homes for wealthy industrialists who wanted to live near their Hackney Wick factories. After the lightning, they flocked to the area and it became more dilapidated.

Curry creates installation pieces and sculptural assemblages and fascinates the stories behind objects. He was interested in keeping the house; hold onto every board and every old nail. He convinced his architects to leave the plaster walls unpainted and expose their defects. It helped that the builders had left a lot of naive scribbles on the walls, assuming they would be hidden under wallpaper forever. Without Studio X, the house might have become a museum piece. “In the end Oscar called me with the question, ‘Are you a Victorian? ‘He convinced me that we can keep a sense of history and at the same time use the house for my own way of life. “ 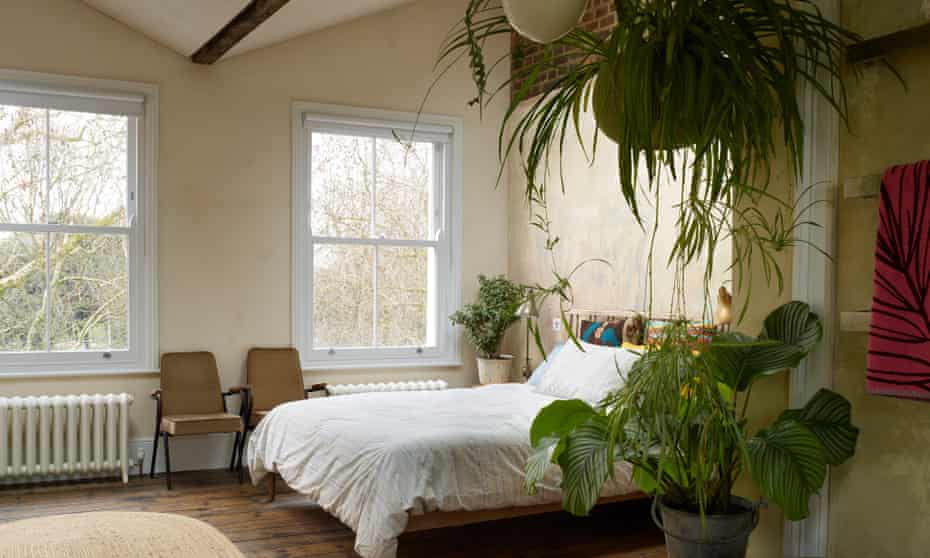 Curry was born and raised in the Bahamas. For him it meant intense light and tropical green. “I wanted to put as much light as possible into this place, even on gray winter days,” he says. Studio X achieved this by opening up the back of the house with a floating staircase and large picture window. There is also a glass box extension in the basement kitchen that overlooks Curry’s garden, made from a tangle of blackberries.

They took the same approach on the top floor, once two poky bedrooms, now an open plan master bedroom with bath. The low ceiling was opened into the V-shaped butterfly roof with skylights. The main attraction here is the amazing Victorian porcelain bathtub that Curry discovered when his builders took him on another project. “I got there just in time – they were waiting for a sledgehammer to crush him.” The bathroom is lined with plants for subtle shielding and Bahamian lushness. The toilet is hidden in a wall of built-in cupboards. 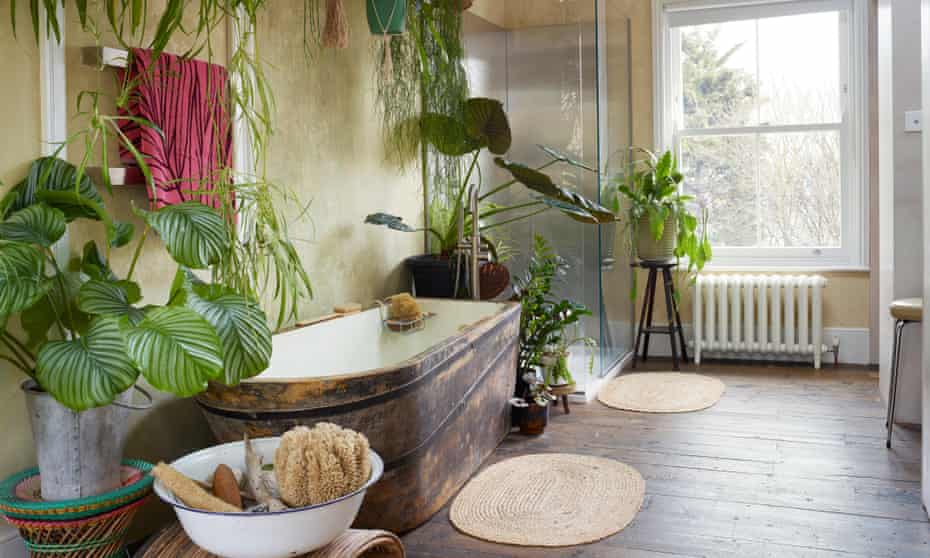 “It’s about bringing many different things together and finding their rhythm”: the bathroom. Photo: Rachael Smith / The Observer

Curry finally has the space to enjoy his collections. They are shown in measure in each room. A seemingly different group of objects on the mantelpiece of the living room is united by their columnar shapes. In the back living room some of his vintage cameras are on display in a former chimney.

In the library on the second floor, Curry had a wall made of birch shelves from Philipp Weltzien Furniture. He comes here to be inspired or distracted by his books on art and anthropology and his esoteric groupings of souvenirs, shells and toys, all in glass cabinets to avoid dust. The eye of his artist guides the collections. “I’m fascinated to see multiple variations of an object type,” he says, “whether it’s an alarm clock or a teapot.”

Curry’s approach to furnishing draws on his heritage and the Caribbean idea of ​​the “mashup”. “The Bahamas are where the people get from. There are fewer things so that people live with inherited pieces, and when they go into a store they may have one rug to choose from instead of 20, so people live with a real mix of styles. It’s about bringing many different things together and finding their rhythm. “