Jackson, Mississippi, water crisis: Repairs have begun at the water treatment plant but residents are still without clean water 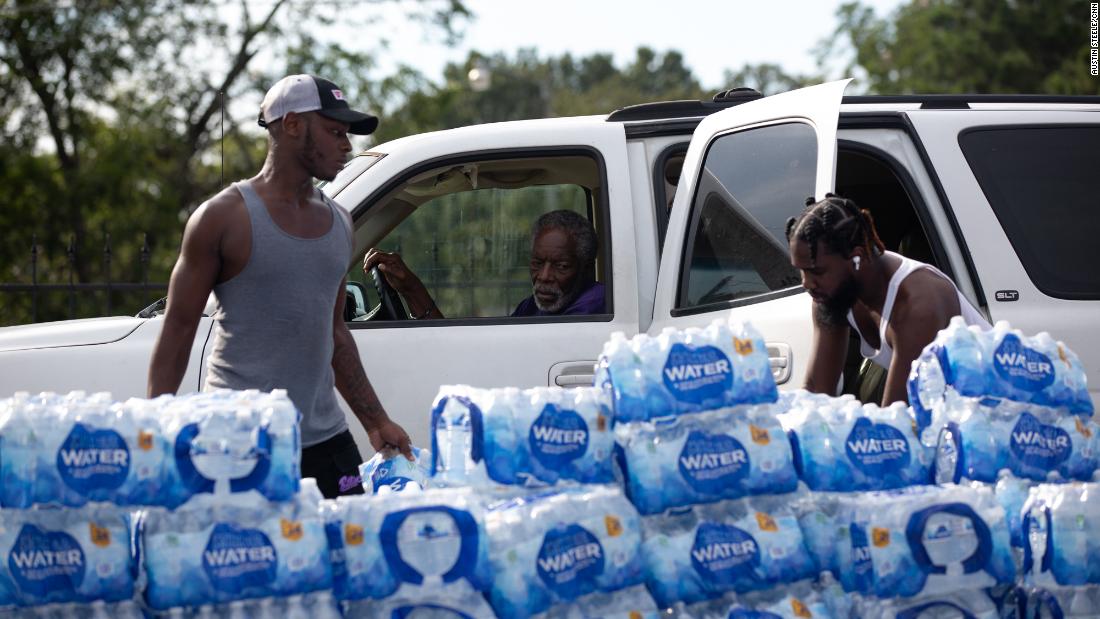 “We have made some positive progress within the system. We are encouraged,” Jackson Mayor Chokwe Antar Lumumba said in a news conference Thursday.

The city’s residents have been told to boil their water for quality reasons since late July, and the water system has been in trouble for years.

The rental pump installed at the treatment plant on Wednesday will help add another 4 million gallons of water to the system every day, authorities believe. The state also contracted with outside operators to begin work on critical emergency repairs.

Mississippi Gov. Tate Reeves said proper pH measurement is one of the challenges of the Jackson water system.

“There were some challenges with the sensors that measure the pH of the water going into the facility,” Reeves said, adding that OB Curtis’ water treatment plant operators worked with each pH and “saw it and… would know exactly ‘what they need to add’ to normalize imbalances.

“We believe there is potential for a relatively quick fix to make these sensors accurate,” the governor said.

Officials aren’t 100% sure the quick fix will work, but state and local officials want to try, Reeves said.

But even as fixes have been made, the service has faltered. “There will be future disruptions … they are unavoidable at this point,” Reeves said during a press conference Wednesday, during which he also urged residents not to drink the water without boiling it.

The treatment plant routes treated water to above-ground tanks located throughout the city, and those tanks — which deliver water to homes and businesses — should be full for optimal pressure, Reeves said. The failure of the system’s pumps led to a drop in the tank levels.

More than half of the tanks “have started to fill up again,” city officials said in a news release Thursday.

“We’re hoping that we’ll be able to increase the amount of water, which will eventually fill up the tanks and ultimately lead to a scenario where we can do the right testing and actually produce clean water,” the governor said Wednesday . “But we’re not there yet.”

The sites occupied by the National Guard include the state fairgrounds and Hinds Community College, and will be open daily from 9 a.m. to 6:30 p.m. for the time being, he said.

Lumumba had said on Wednesday he was optimistic the water supply could be restored this week but that “there’s a huge mountain to climb to achieve that”.

Daily life in Jackson was turned upside down

Residents see cloudy, discolored water coming out of their taps and are told it should be sufficient for sanitation purposes. They cannot use the water for drinking, cooking or washing dishes, but they can shower and wash their hands in it, officials said.

“Please make sure your mouth is not open when you shower,” Jim Craig, senior deputy and director of health protection at the Mississippi Department of Health, told residents Wednesday, adding that pets shouldn’t be consuming the water either.

According to the mayor, when the residents will no longer have to boil water is not yet foreseeable and can only be estimated when the water pressure is normal again.

At the city-operated distribution points, residents had to endure long lines to get bottled and non-potable water. Some locations ran out of water this week and people were turned away.

Jackson resident Anita Shaw, 63, arrived early Thursday at a location where the Salvation Army was scheduled to distribute bottled water — a location the group says ran out of 2,700 boxes a day earlier before everyone in could get one in a long line.

Shaw expressed his frustration: Residents have been without clean water for more than a month; Not everyone can afford to keep buying bottles, and the lines for free water are long. The water that came out of her faucet Thursday was light brown, she told CNN.

Businesses – many of whom are still trying to recover from Covid-19-related setbacks – are also struggling. The city’s hospitality industry has been hardest hit, said Jeff Rent, president and CEO of Greater Jackson Chamber Partnership.

“Hotels and restaurants, which are already tight, either cannot open or have to make special arrangements, including buying ice, water and soft drinks,” Rent said.

President Joe Biden approved an emergency declaration for Jackson, and Reeves said it will allow Mississippi to tap into critical resources to respond to the crisis.

FEMA Administrator Deanne Criswell will travel to Jackson on Friday, CNN has learned.

Although Jackson has had numerous water problems over the years, acute problems have arisen since late July, when cloudy water was noticed at the city’s OB Curtis Water Treatment Plant. The state imposed a boiling water limit on Jackson because the cloudiness makes the water more likely to contain disease-causing organisms. Around the same time, the main pumps at OB Curtis — the city’s main sewage treatment plant — were severely damaged, forcing the facility to work with smaller backup pumps, Reeves said this week, without detailing the damage. The city announced on August 9 that the malfunctioning pumps would be taken offline.

City officials and Reeves’ office have not responded to CNN’s requests for details about the damage and causes.

Last week, the governor was warned that Jackson would soon be out of running water, Reeves said. Then Floods: Heavy rains last week caused the Pearl River to overflow and flood some streets of Jackson, peaking on Monday.

Intake water from a reservoir was affected by the heavy rains, causing a chemical imbalance on the conventional treatment side of the plant, Craig said Wednesday. This affected particle removal, causing that side of the plant to be temporarily shut down, resulting in a loss of water distribution pressure.

Even with the makeshift pump installed on Wednesday, significant mechanical and electrical issues remain due to the delayed maintenance, including various pumps and motors that need to be replaced and sludge in pools that has accumulated to “unacceptable” levels, he said craig

Jackson’s water system was also damaged in February 2021 when a severe winter storm hit, pipes froze and burst, leaving many residents without water for a month. That comes after the city’s water system failed an Environmental Protection Agency inspection in early 2020, which found the drinking water had the potential to harbor harmful bacteria or parasites.

In July 2021, the EPA and the city entered into an agreement to “address long-term challenges and make needed improvements to the drinking water system.” The EPA also recently announced $74.9 million in federal funding for water and wastewater infrastructure for Mississippi.

Advocates have previously pointed to systemic and environmental racism as one of the causes of Jackson’s ongoing water problems and lack of resources to address them. About 82.5% of Jackson’s population identifies as Black or African American, according to census data, while the state legislature is predominantly White.

When asked Wednesday about claims that deteriorating water infrastructure in Jackson was due to environmental racism, Reeves said the state does not operate the water systems.

$10,000 Worth Of Copper Fittings Stolen From Lincoln Plumbing Company | KLIN