There are DIY enthusiasts and Kalyn Matthews: Over the course of two years, Matthews has revitalized a derelict townhouse in Philadelphia and transformed it into a stylish, inviting home with a combination of used finds, salvaged materials, and loads of DIY.

While this was Matthews’ first whole-house project, it’s not new to the design game. After working as a flight attendant for over two decades, Matthews honed her skills as a home stager before finally taking the plunge into creating her own room.

“I always knew I was good at it, but I never had the confidence or the resources to get into it,” says Matthews. A few years ago she decided to take matters into her own hands. After unsuccessfully attempting to qualify for a loan and unable to compete in a competitive cash-only market, Matthews recalls, “I drained my 401,000 and got into massive debt on a tiny townhouse in Philly to buy.” Since she was “more than broke” after the house she was about to flip shut down, the renovations required scrap, cleverness, and a fair amount of cold, hard work.

The house when she bought it was in gross shape to say the least: “I needed something that was really cheap,” says Matthews. “Not a lot of those. I was looking for something to handle, but I definitely wanted something that needed renovation.” And finally she got it – peeling wallpaper, crumbling drywall, and bad design decisions of the 1970s included. And she had to work.

“It took 2 years to finish,” says Matthews. “My brothers and I did most of the work ourselves, except when I had to hire professionals like HVAC and plumbers.” Tiles, grout, painting, wallpaper, and surface finishing, furnishings and decoration all fell to Matthews and her brothers.

“Over time, it became less of a pinball machine and more of a design love affair,” says Matthews, who documented the process on her website, Righteous Spaces. A little over two years later, the derelict property was a brightly colored, welcoming home that Matthews was selling for a profit.

“The look I wanted was a townhouse,” says Matthews of her design vision. Her first step in achieving this in the dated, pea green kitchen was to relocate the refrigerator to make room for a window and sink in the back of the property. “We’re the only house on the street with this rear view because we had to move the cables,” she says.

The kitchen’s dramatic transformation was completed with white Shaker-style cabinets that were infused with a touch of blue in the form of backsplash tiles that Matthews installed himself.

She handcrafted the spice rack by pinning rows of wooden hymn bookkeepers from a former church to a barn door – both items found in a junkyard. “The door extends there so it’s a flat room – there’s not much you can do with it,” explains Matthews. “That was the perfect size.”

The living room fireplace in front of Reno.

One of the biggest DIY projects in the house was the fireplace. “It was a big focal point of the room and something I couldn’t really remove, so I had to get it working,” said Matthews. Like any intrepid do-it-yourselfer, she sought advice on the Internet: “I watched a few YouTube videos and taught myself how to do a mortar treatment.” Many coats of paint later, the tired brick hearth is now a modern, sculptural fireplace, which Matthews topped with a piece of scrap wood from the Lendenhof. (The old mantelpiece now has a new life as a shelf in the kitchen.) 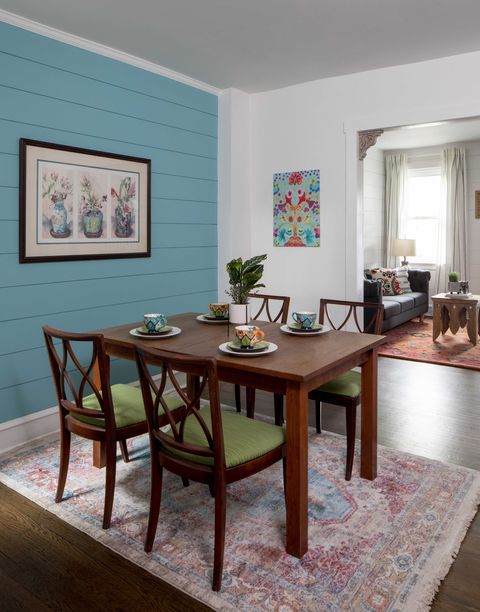 Matthews came up with the idea of ​​pulling an overlapping wall through the living and dining areas to consolidate the cottage look – but that much material can get expensive, she says. So she came up with a trick: “I used cheap laminate flooring to get the shiplap look,” she says. “I had to sand it down a lot and then prime and paint it.” However, the result is a textural effect that gives the room an instant patina. 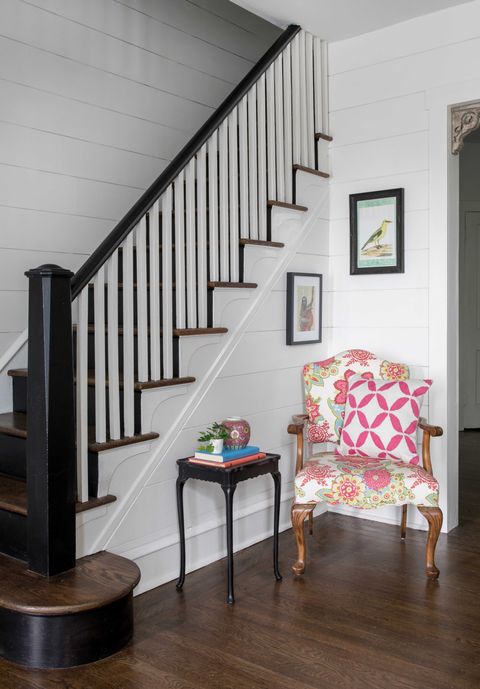 “The stairs were a challenge,” says Matthews. “It crashed on one side and split in two.” She propped it up from the basement, then painted the railing black “to modernize and blend it with the rest of the black accents in the house” while retaining the original details. 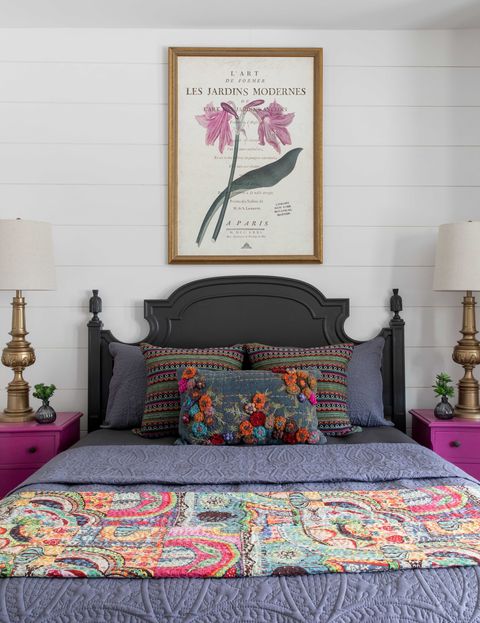 After grunting the rebuilding, Matthews enjoyed flexing her creative muscles by outfitting the new rooms. “I hope to use the proceeds from the sale of this house to start a design company,” she says.

The bathroom in front of Reno.

In the bathroom, Matthews turned a Craigslist-rated dresser into a vanity. “It was in really rough shape,” she remembers the piece. “When we got it home, it was already falling apart – so we glued it back together and then put a new stain on it and added the sink.” This country look is offset by clear, black and white tiles that Matthews – You guessed it – grouted yourself.

“The biggest lesson I learned from this is that I could do more than I thought,” she says.

See more of the completed project below.

This content is created and maintained by a third party and imported onto this page to help users provide their email addresses. You may find more information on this and similar content at piano.io