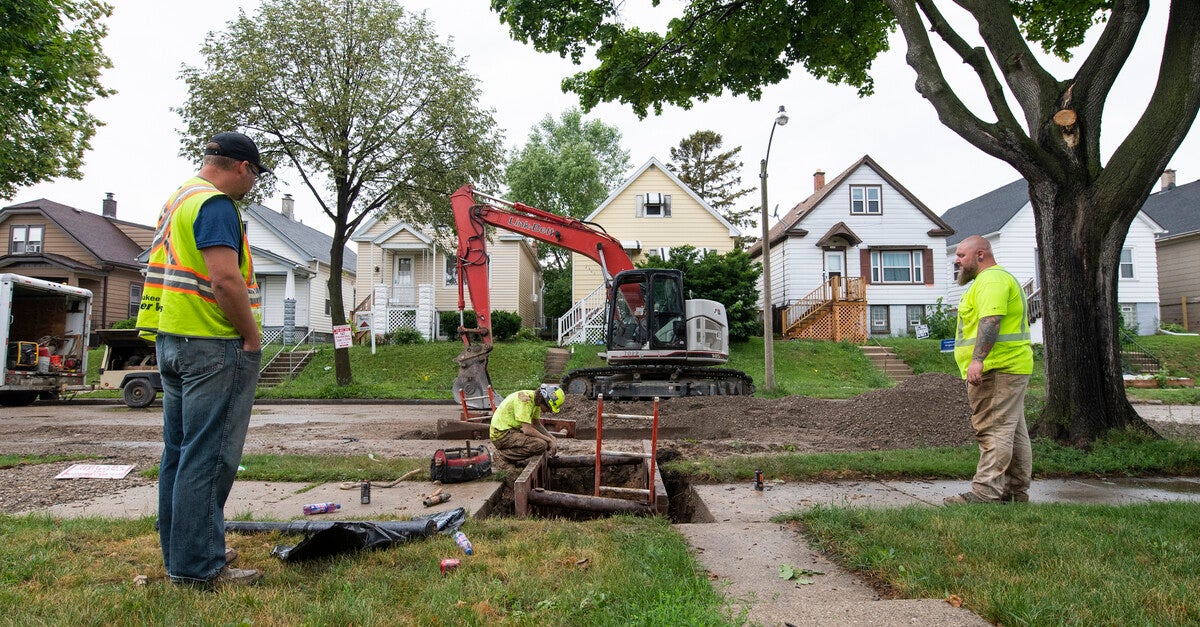 As of 2017, the City of Milwaukee began the grand task of replacing its 73,000 lead water supply lines. Six years later, around 67,000 of the water lines are still in service in the state’s largest city.

Federal funding could help expedite the move process, but some community leaders are still concerned the city is moving far too slowly. At the current rate, it would take Milwaukee over 60 years to replace the remaining lines.

Joe Fitzgerald is the Water City Program Manager at Milwaukee Water Commons, a nonprofit organization focused on water quality. Fitzgerald said he would like to see all of the city’s remaining lead pipes replaced within the next 10 years. The federal government is also pushing for this goal.

“As an organization, we don’t feel like the replacements are happening fast enough,” Fitzgerald said. “We don’t think it meets the urgency of the needs here in the city, and just the reality of what this issue is that we face as a city.”

According to the Wisconsin Department of Health and Human Services, lead exposure can cause brain damage and other physical problems. Children under the age of 6 who are exposed to lead are at greater risk of developing lifelong problems, including developmental delays, slowed growth, difficulties in school and reduced IQ.

In 2022, it was announced that Wisconsin would receive approximately $250 million from the Infrastructure Investment and Jobs Act over the next five years to replace lead water supply lines across the state. There are approximately 170,000 Lead Service Lines in communities across the state, and most are in Milwaukee. The money could help expedite the relocation process in Milwaukee, where progress has been hampered by limited funding and labor shortages.

Patrick Pauly, the Milwaukee Water Works interim superintendent, said the department plans to replace 1,200 lead water supply lines this year. The department also has a goal of increasing the number of replacements by 500 per year, subject to city approval.

“We’re well aware of the challenges and the frustrations with the pace, and we’re thinking and discussing and making attempts to move that faster,” he said.

Pauly is optimistic that the city will steadily increase lead pipe replacements, adding that he believes the city will reach its goal in less than 50 years. But he still believes it could be decades before the process is finally complete.

“I think we’d all like to see that schedule go faster,” Pauly said.

A lack of funding for the project has been a constant complaint from community leaders for years, as the city never met its annual goal of 1,100 replacement workers a year. The Public Service Commission has estimated the project will cost $750 to complete in the city.

Pauly said supply chain issues arising from the COVID-19 pandemic have not helped. He believes federal funding for statewide lead reductions is likely to increase demand for supplies and worsen shortages.

Other municipalities have been removing their pipes more quickly, including Denver, which successfully replaces 4,500 lead pipes each year. The city received federal funding from the Environmental Protection Agency for its plan. The City of Newark’s Lead Service Line Replacement Program also completed nearly 24,000 line replacements in less than 3 years at no cost to city residents.

Other communities in Wisconsin have also successfully replaced their lead pipes. Madison replaced all 8,000 known lines with copper tubing. In 2020, Green Bay completed a five-year project to remove more than 2,000 pipelines.

Derek Beyer serves on the steering committee of Get The Lead Out, a coalition of Milwaukee groups fighting for faster replacements. He would like to see more action from Milwaukee officials on funding.

“It seems like they kind of rely on government grant money,” Beyer said.

Last September, Milwaukee Mayor Cavalier Johnson announced that the city is developing an equity-driven program aimed at directing federal funds to historically disadvantaged Milwaukee communities. Milwaukee Water Works is in the final stages of developing this plan, which will rank pipe replacement census blocks by density of lead supply lines, incidence of elevated blood lead levels in children, and an “overall score on socioeconomic indicators of deprivation, as defined by the Area Deprivation Index.” “, it says in a letter from Pauly.

Wisconsin Watch previously reported that 9,600 children under the age of 16 were poisoned by lead in Wisconsin between 2018 and 2020. Of the state’s lead-poisoned children, nearly two-thirds live in Milwaukee County.

The new plan is encouraging for Beyer, who has described the problem as a “public health crisis.”

“Tackle the problem from those areas first,” he said.

Rebecca Scott, the environmental loan division manager for the Wisconsin Department of Natural Resources, said the federal funds will be added to the Lead Service Line Replacement Program. The program is funded through the Water Infrastructure Fund Transfer Act, with Wisconsin receiving more than $63 million.

These funds were granted to the municipalities with 100 percent capital allocation. But now, due to federal funding limitations, only 49 percent of the funds must be awarded as the main award, and only to “disadvantaged communities or to projects targeting disadvantaged census districts.”

Scott said that “complicated” things for the program.

“We were able to only grant full capital forgiveness. We didn’t have to limit it just to disadvantaged communities either. So these changes came with funding from the BIL[Bipartisan Infrastructure Act],” Scott said.

The application period for the funding ends at the end of June. Scott said she believes Milwaukee will likely receive the largest amount of funding.

“I would assume they get a bigger loan than any other municipality,” she said. “It’s going to be partly based on what they think they can do.”

But even with the additional federal funding, Scott said, she still doesn’t think it will be enough to replace all of the state’s lead pipes.

“We’d love to bring out all the leading service lines in the state, but even if we’re funded by BIL for five years, obviously removing them all won’t be enough,” Scott said.