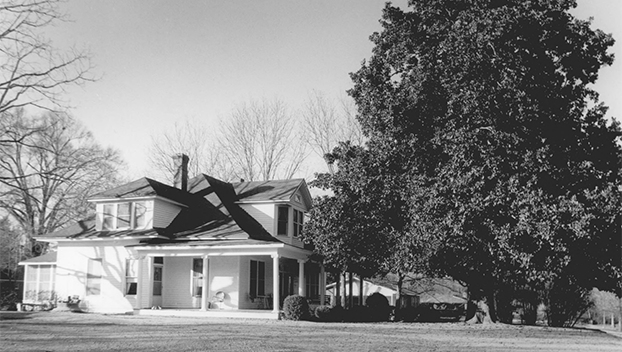 About eight years ago, Kellie Dillard became interested in buying an old house in Saltillo known as the Barlow Burrow House that had been unoccupied for several years.

The two-story Colonial Revival residence was built in 1914 by Saltillo merchant Barlow Burrow. It is on the same site as his father’s house, Capt. John H. Burrow, built in the 1870s.

In the fall of 2020, the home’s owners, Judd and Donna Hambrick, who purchased the home and its contents from the Burrow family in 1983, agreed to sell it to Dillard.

She immediately began work to restore it to its former glory.

The first thing Dillard did was put a new roof on the house. She also had foundation work done to level the house again.

“Which is neat, there was no termite damage — none,” she said.

Since the house had not been occupied for some time, the landscaping had gotten out of control.

“You couldn’t see the house because of the shrubbery and the bushes that have been there for 60 or 70 years,” Dillard said. “We had to reduce a lot of that. Locals camped to see all the work being done. What I enjoy most about living here is all the stories people have told me about the house.”

All of the walls and ceilings were clad in beaded panels, which Dillard kept on the ceilings and interior walls. She had plasterboard laid outside the house for heating and cooling.

Dillard had the interior walls of the house painted a soft cream color and all the woodwork was cleaned and stained to its original dark brown colour. She also added new lights to several areas of the house.

“All of the hardwood floors are originally from the house,” Dillard said. “Most of the floors were covered with carpets or rugs, so they were in excellent condition. Only the floor in the kitchen and butler’s pantry had to be tiled. The hardwood could not be recovered as it was partially dented and other parts covered with layers of linoleum.”

There are six non-functional coal fireplaces in the house and the mantels on the two upstairs fireplaces are originally from the house built on the property in the 1870’s.

The front entrance to the home consists of a single beveled glass door surrounded by sidelights made from single beveled glass panels. The fixed transom has three windows. With the exception of an 18-pane window in the living room, most of the windows in the house are large double casement windows.

“This house was untouched,” Dillard said. “Even the corrugated glass in the windows is original.”

The ground floor comprises a foyer, living room, dining room, kitchen and butler’s pantry, half bath and a master suite with sitting area and bathroom. Upstairs are three bedrooms and a bathroom.

There are two flights of stairs leading to the second floor: the main staircase in the lobby has two lower steps curving around a post; The back stairs lead off the kitchen.

A few pieces of antique furniture, like the dining table, were in the house when Dillard bought it, but she’s collected the rest over the past 30 years.

“Nothing in this house fits together,” she said. “There’s Empire, Duncan Phyfe, Federal Styles. The grandfather clock in the dining room was built the same year as this house – 1914. There is nothing new in this house except for the living room furniture.”

One of the most striking aspects of the home is the eclectic collection of artwork that adorns the walls.

“We love label sales, real estate sales, junk sales and antique shops,” Dillard said. “There’s an 1852 painting of a gentleman hanging over the fireplace in the dining room that I got at a flea market. I have no idea who he is. We called him Uncle Cyrus.”

Dillard’s mother lived in Ocean Springs for several years, and it was there that Dillard fell in love with the artwork of Walter Anderson.

“I probably have a dozen or more of his pieces,” she said. “I have been collecting works of art for 20 years. I just buy what I like – this house is a hodgepodge of what I like. I’m not trying to look like something in a magazine.”

The exterior of the house was also redesigned. Dillard had French drains installed along with an irrigation system, lighting, brick steps and walkways, and new landscaping.

“There are two magnolia trees outside that we kept but had pruned,” she said. “This is my favorite part on the outside of the house. I love the fact that they shade the house but also that they are so old.”

Work on the house was completed this past November, at which time Dillard and her daughter, Mary Kirk, were able to move into the house. Mary Kirk is studying architecture at Mississippi State University. Dillard’s son Bradley and his wife Laiken live in Tupelo.

In 1983, the previous owners and others listed Barlow Burrow House on the National Register of Historic Places for its architectural and historical importance.

That’s one of the reasons Dillard wanted the house — not just for herself, but for her daughter.

“I want to do my certificate in historic preservation,” said Mary Kirk. “That’s the kind of work I want to do — get into older homes and promote sustainability.”

Dillard said Saltillo has a lot of cool old homes, and she hopes more young families will buy and restore them.

“I was hoping there would be a trickle-down effect when redesigning this property,” Dillard said. “I’m glad we were able to bring this old house back. I feel like a keeper of history.”

The 8 Best Efficient Bathroom Faucets of 2022

Barron Plumbing Offers Cold Weather Inspections for the Season Ahead