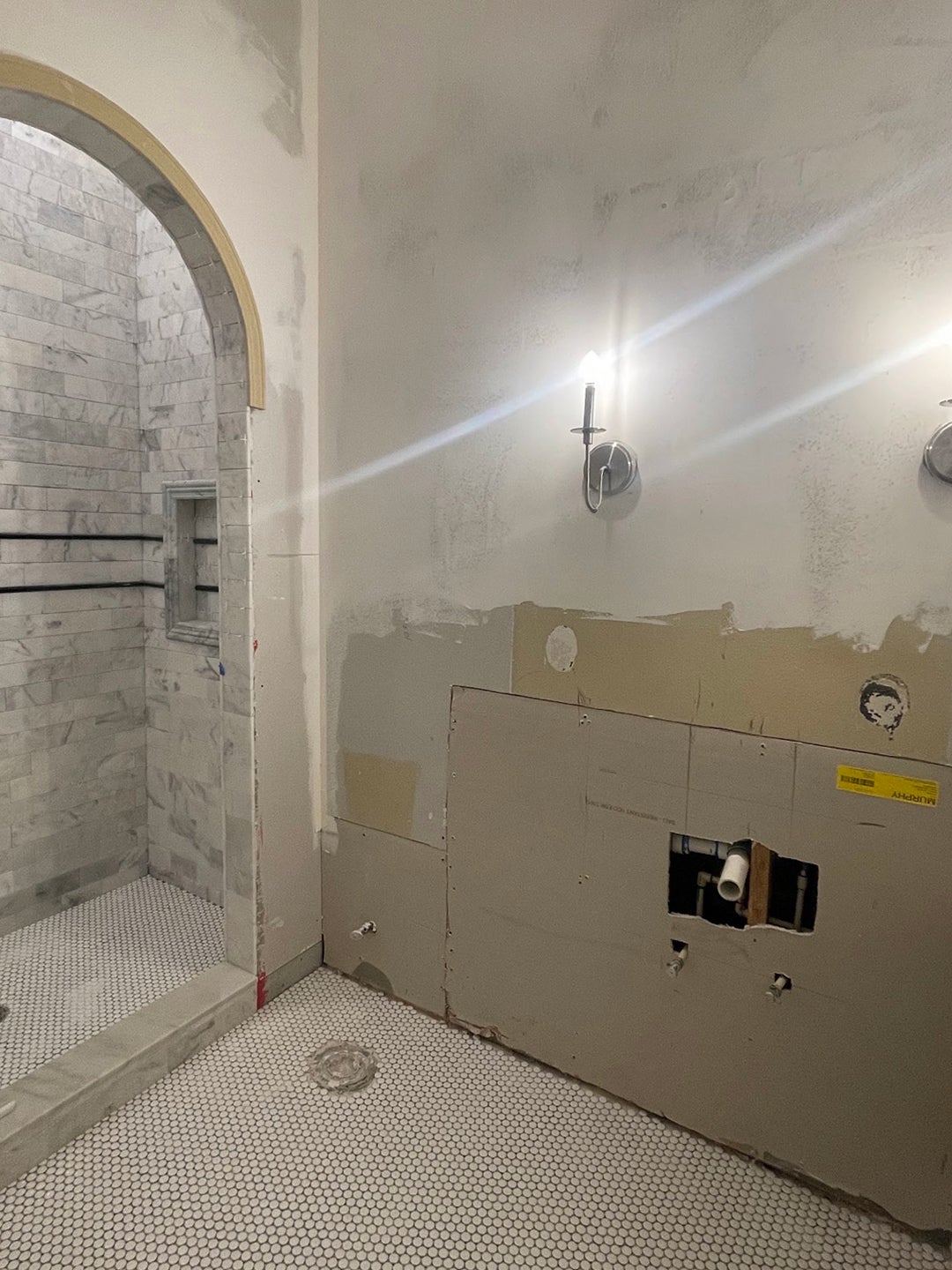 Ryia Jose’s approach to redesigning her Houston home was mostly IKEA hacks and fanciful painting rather than demolition and construction. However, the content creator’s beige-tiled powder room with walls and a dated vanity to match wasn’t a space that bold wallpaper could fix. “That was my first gut reno,” she says. “I needed a blank slate.” Nostalgic for the bright colors she grew up with in southern India, Jose (known as Kin and Kasa to her followers) set about transforming the drab room into a place that both guests and her family would love to use it too—starting with ripping out the bathtub.

Move it to the right 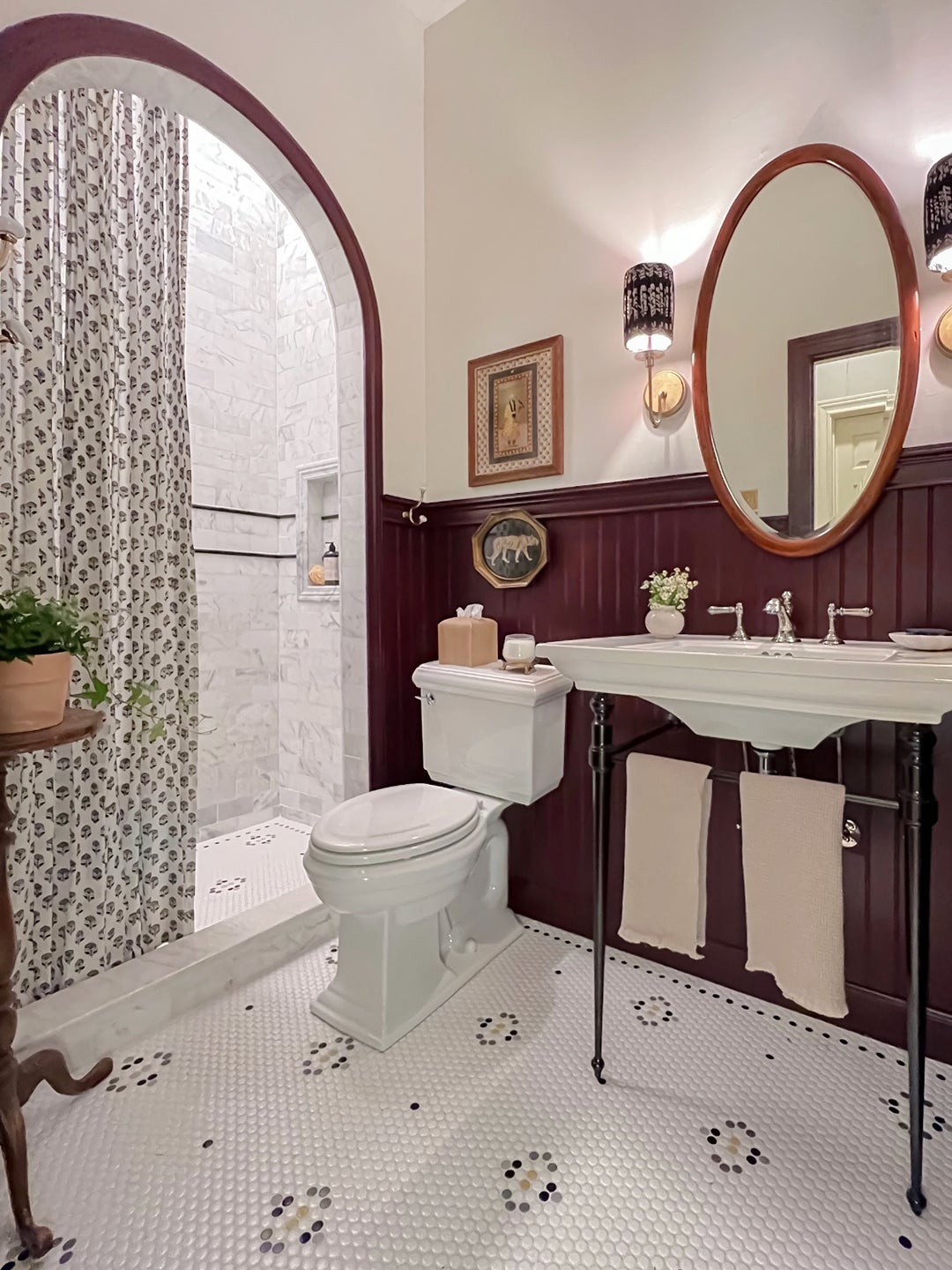 The bathroom after that.

Since the home already had two additional bathtubs, Jose wanted to make a change that would allow her parents to use them more easily (the original step-in tub was too high). It also took up valuable square footage. Replacing the outdated faucet with a more secure shower stall gave Jose an opportunity to add a bit of architecture. By moving the toilet just 4 inches to the right, she had just enough room to carve out a domed opening. “We didn’t have to replace the lines,” she explains.

The new shower is clad in subway marble tile up to the nearly 10-foot ceiling, with two rows of black trim to orient the eye. But that wasn’t the original plan. After tiling almost a quarter of the wall a white and beige diamond pattern, Jose realized she hated it. By switching to a less fussy design, “the worst bathing area kind of feels so much bigger than before,” she says. Even with a standard shower curtain (a floral block print from India? Of course) the marble helps reflect the light and makes the enclosed area feel like its own space. 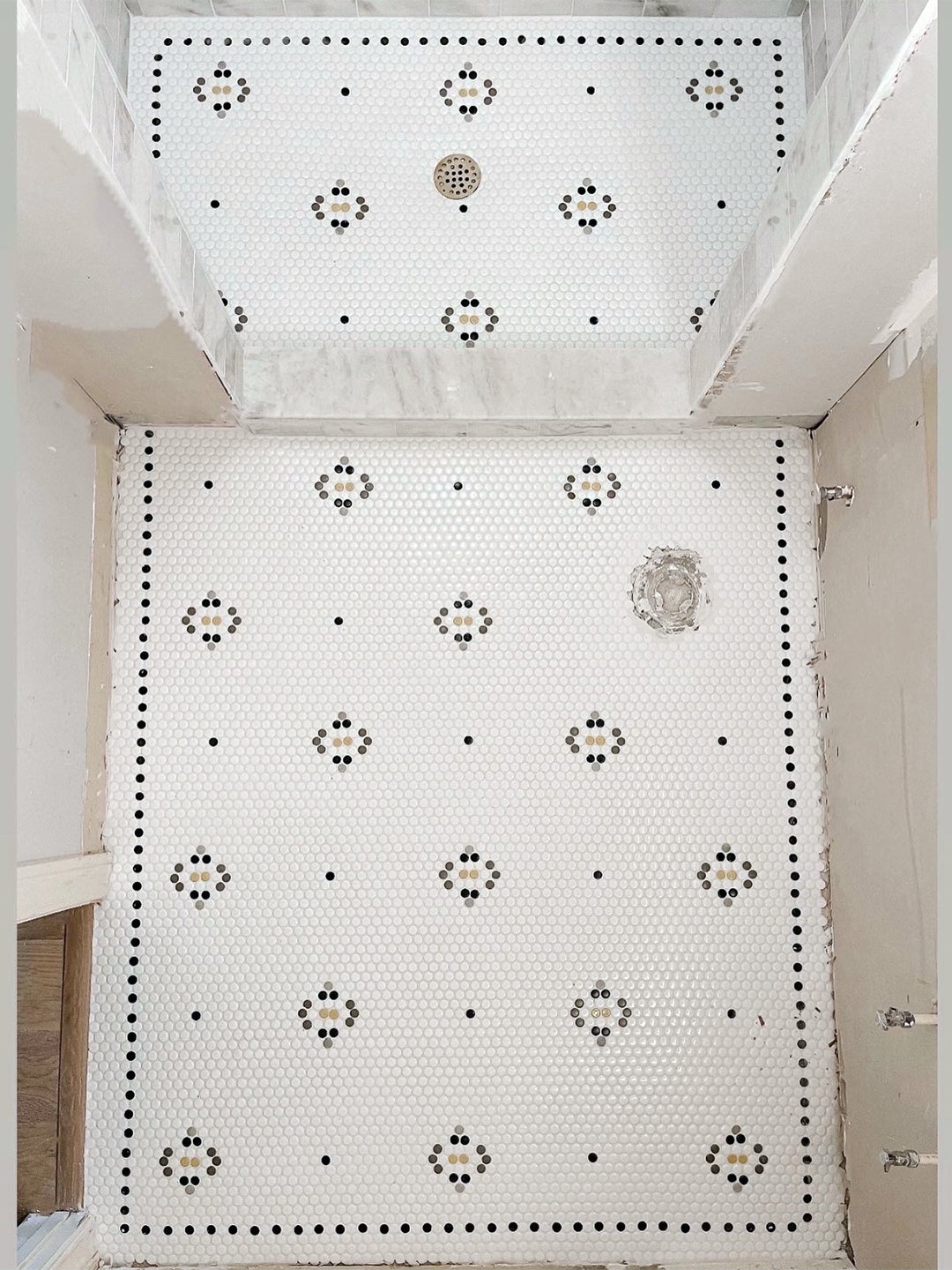 The floors, after that.

After laying the entire expanse of white penny tile on the floors, Jose changed his mind: It felt too basic for the elevated space. “I found this 50-year-old design catalog but I couldn’t find a look like this anywhere,” she says of her newfound inspiration for flooring, another nod to her love of block prints. Instead of completely changing her plans, this time she took the tile pattern into her own hands. She mocked up the design on paper, then carefully removed the appropriate white pennies with a wide-bladed flathead screwdriver and replaced them with black and yellow circles from a Home Depot pattern sheet. 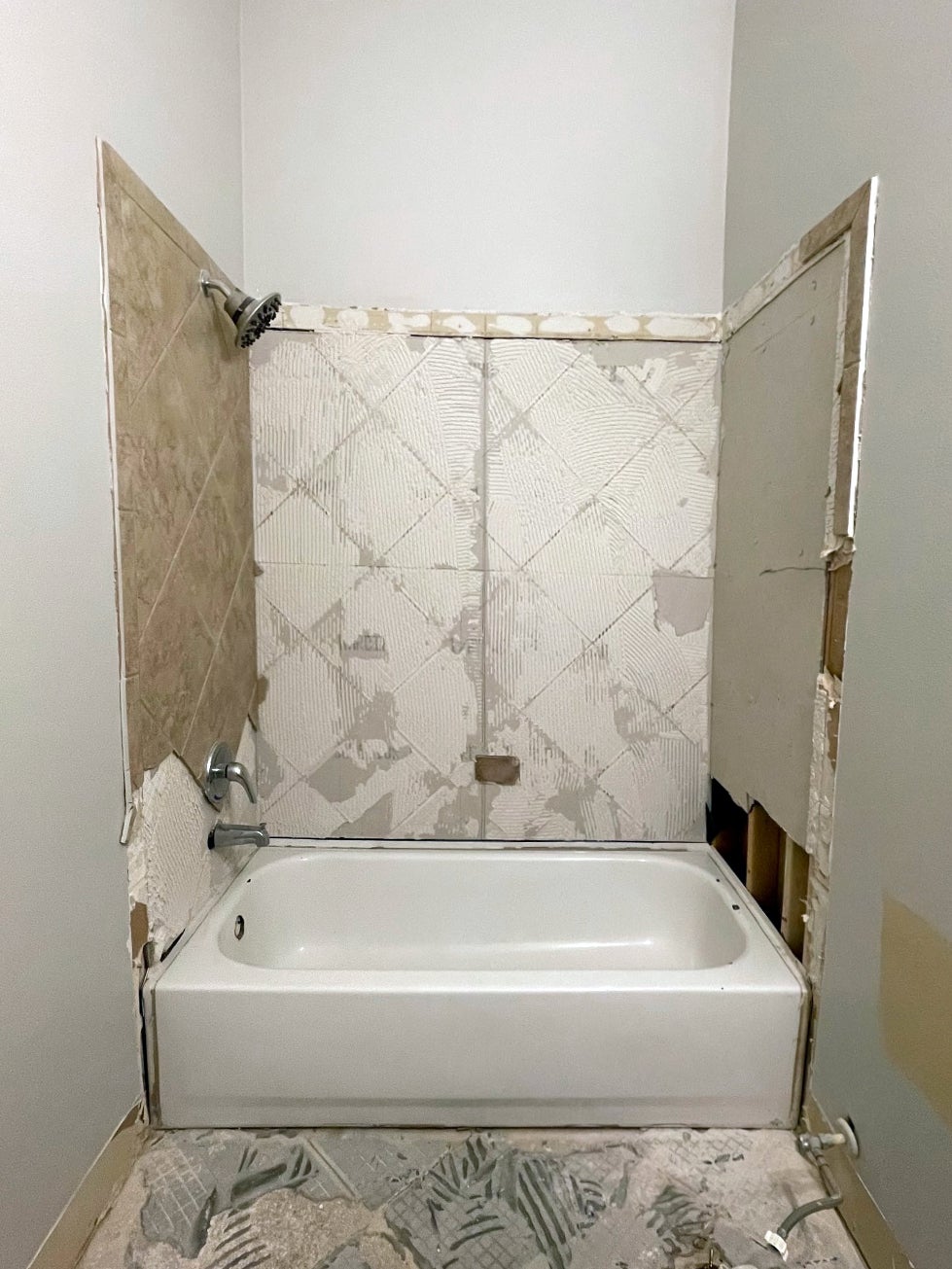 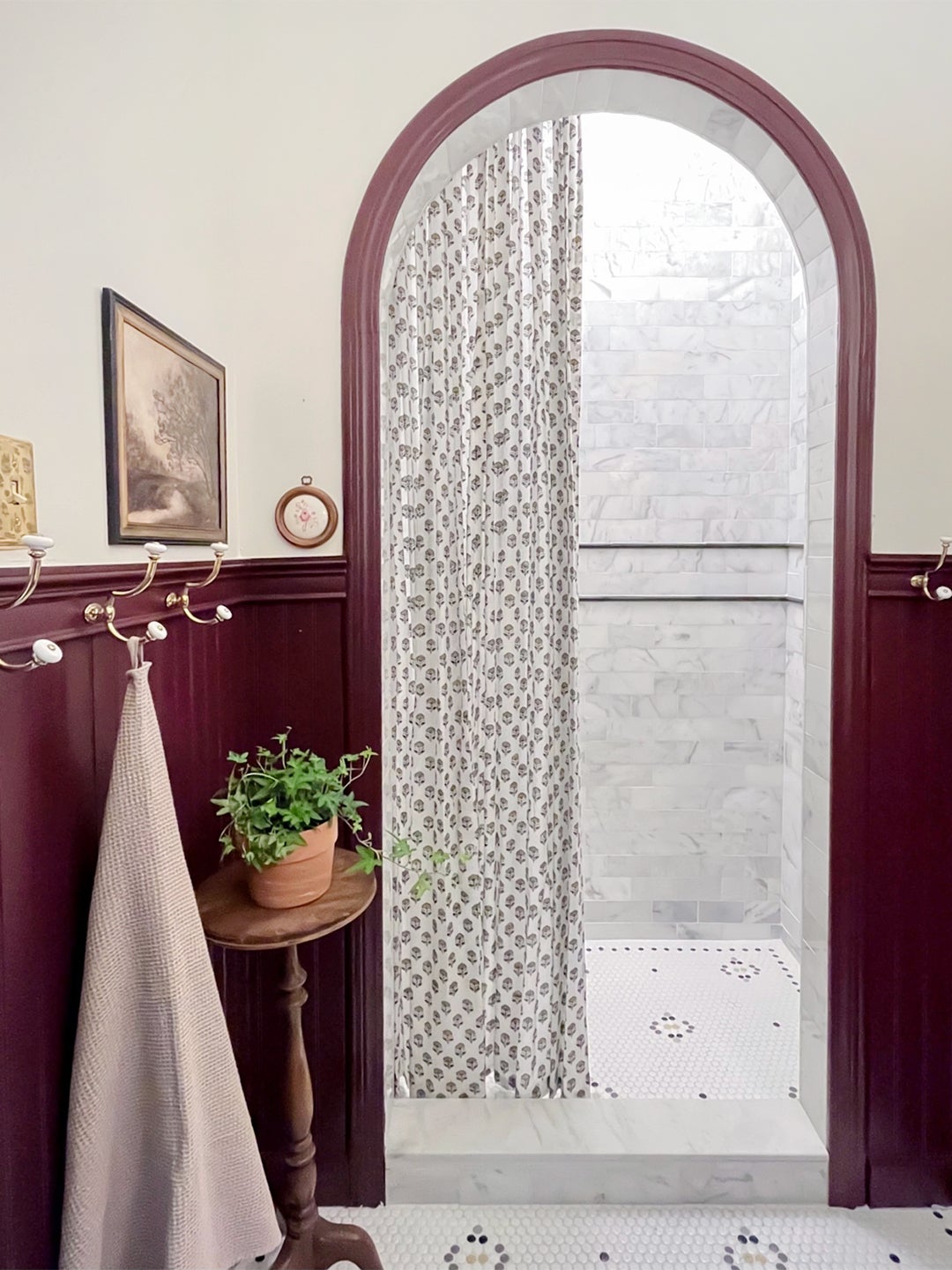 The bathroom after that.

Most of her home is sprinkled with greens and neutrals, but for this location, Jose opted for a rich aubergine hue (it matched Farrow & Ball’s Brinjal) on the chair rail bar. “I wanted the color to reflect who we are and where we come from,” she explains. “The white walls didn’t do that.” At first she was concerned that the dark hue would contradict all her hard work to make the narrow, windowless space appear larger, but in reality it added depth. Choosing a light-reflecting high-gloss finish didn’t hurt either. Now the bathroom isn’t just more functional — it’s a tangible interpretation of Jose’s childhood.