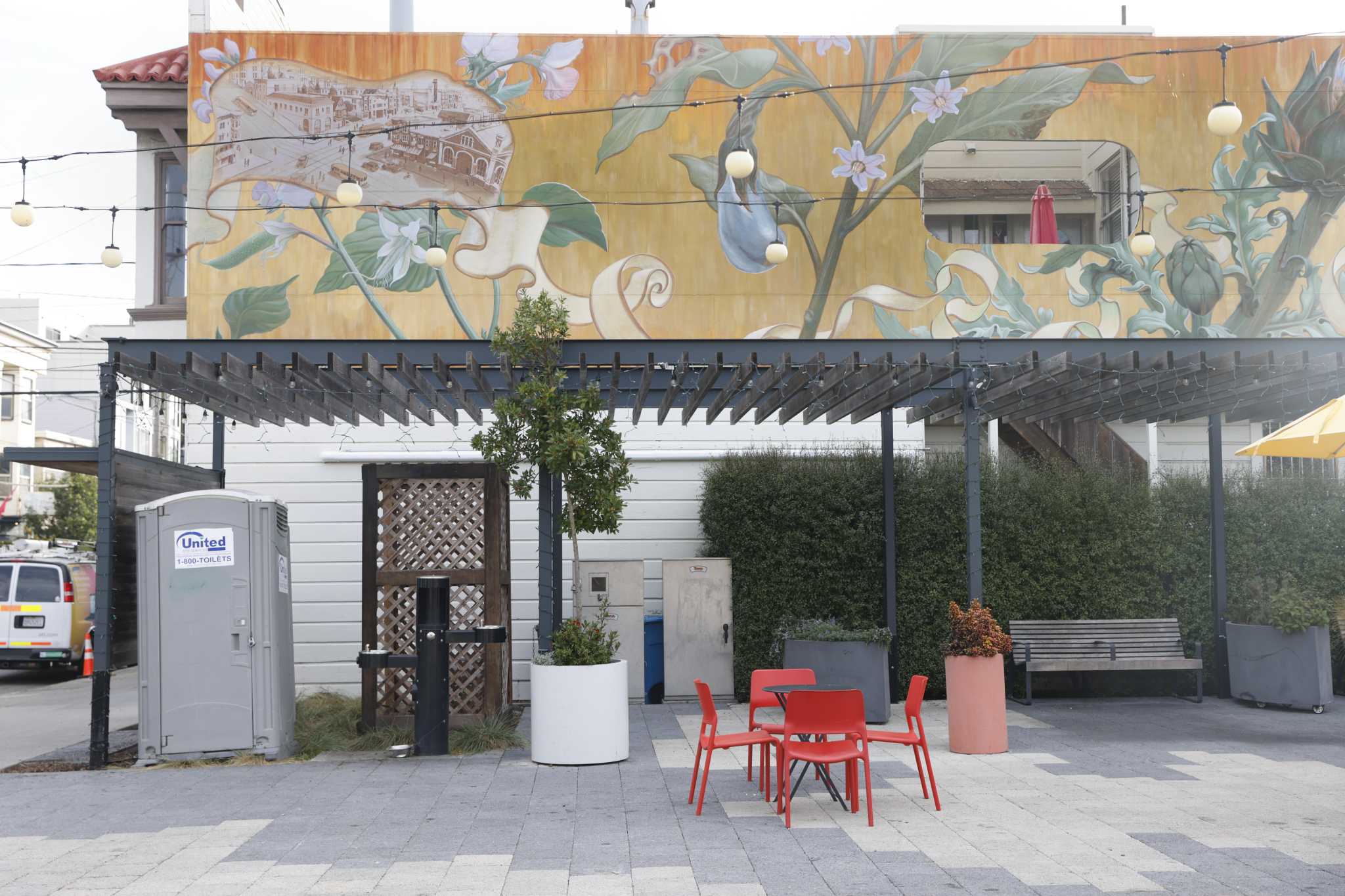 Noe Valley’s simple desire to have a public bathroom installed in its cherished Town Square appears to be circling the drain — and even Gov. Gavin Newsom is wading into the dispute over the projected $1.7 million cost.

The Newsom office informed me that government funding for the only 1,500-square-foot toilet would not be provided given the stomach-churning price.

“A single, small bathroom shouldn’t cost $1.7 million,” Erin Mellon, the governor’s communications director, wrote in a statement. “The state will hold funding until San Francisco comes up with a plan to use those public funds more efficiently.” If this is not possible, we will apply to the legislature to revoke this appropriation.”

The governor’s dresser notice appeared to be similar to that of the state recently briefing San Francisco on its overly complicated, expensive process for permitting and building housing. In short: Simplify, save money and, uh, put things together – or whatever.

The city, which is under federal scrutiny for its appalling record in housing construction, risks losing state funding if it doesn’t quickly come up with a realistic plan to build 82,000 new housing units over eight years. And if that’s the result of trying to build a toilet, chances are it won’t.

The governor’s office didn’t provide any other details — including what it thinks is a reasonable price for a small bathroom, or whether San Francisco could still get the full $1.7 million if it uses it to install multiple bathrooms in a city would, which she urgently needed.

Member of Parliament Matt Haney, who secured money for the long-awaited loo in this year’s state budget, said he was told by Jason Elliott, Newsom’s senior counselor, on Wednesday, the day this column revealed that San Francisco was going to spend the state the governor’s concerns include money equivalent to the cost of a single-family home to build a small bathroom.

And that it wouldn’t be operational until 2025. And that Haney and other officials had scheduled a press conference — let’s call it a potty party — to celebrate the news. Haney canceled the event after my column sparked outrage and made me a non-party person.

“I’m all for not spending the money — the cost is ridiculous and it’s going to take far too long,” Haney said Friday, lamenting that the toilet troubles have gone international. He had just heard from a friend in Northern Ireland who had read about it in his own local newspaper. Slow news day in Northern Ireland I guess.

“Noe Valley was supposed to get one bathroom, but $1.7 million was supposed to be paid for seven bathrooms, and it was supposed to be a lot quicker,” Haney continued. “I fully support and agree with the governor here and we will work together to get this done cheaper and faster and also send the message that San Francisco needs to fix its broken processes.”

There’s no question that the processes in San Francisco to build anything are congested, making any project too slow and too expensive. But one might wonder why Newsom and Haney are dumbfounded by this fact, given that the former was mayor of San Francisco and the latter was a supervisor, and both should be intimately familiar with the city’s notorious bureaucracy.

It’s also unclear why Haney took the Recreation and Park Department’s $1.7 million price tag at face value if he finds it so awful.

Rec and Park spokeswoman Tamara Aparton countered: “It is shocking that the state is allocating money without understanding what it would be paying for. The Noe Valley congregation requested this money directly from the congregation member, who promised to give it to them, apparently no questions asked.”

However, Haney is now asking questions. He sent Rec and Park chief executive Phil Ginsburg a letter Thursday night asking for “a detailed cost breakdown” of the project.

Ginsburg wrote back Friday morning, noting that he had received questions from Haney about the $1.7 million project for the first time. Ginsburg agreed the project would be “long and expensive,” but said it was a result of skyrocketing construction costs as well as years of policy decisions spelled out in local, state, and federal regulations.

For example, for a small bathroom, city statutes require Rec and Park to obtain or work with the approval of the Department of Public Works, the Planning Department, the Department of Building Inspection, the Arts Commission reviewing its civic design, and the Public Utilities Commission, the Mayor’s Disability Office and Pacific Gas and Electric Co.

He pointed out that Haney’s former meeting place, the board of directors, was responsible for some costly decisions, such as banning the city from doing business or contracting with companies in 30 states because those states discriminate against LGBT people, restrict or suppress abortion rights right to vote. Ginsburg pointed out that buying prefab bathrooms or other materials will be more expensive.

Ginsburg, whose anger seemed to be bubbling out of the page, urged Haney to advocate for changes to those processes, such as: B. exempting small projects from environmental assessment and facilitating the use of prefabricated structures.

He also pointed out that Noe Valley’s bathroom is not uncommon at its exorbitant price. A small one-toilet bathroom in McLaren Park recently cost $1.6 million, and a similar one in Alamo Square cost $1.7 million. The difference this time is in the public attention.

Ginsburg also provided Haney with a breakdown of Noe Valley’s toilet budget. The construction itself — including construction management, materials, utilities, and labor — will cost $1.05 million. The rest seems to go back to the city for its own work: Rec and Park project management, building control for permits, architectural and engineering fees, and other matters.

I showed the breakdown to Rudy Gonzalez, secretary and treasurer of the San Francisco Building and Construction Trades Council, who called it “a bad joke.” He said it appears the department bills the state for city salaries and benefits that are already on the city payroll.

He said it motivated him to call his union colleagues and see if they could find a cheaper toilet and just voluntarily build it themselves for the benefit of the community.

“It’s outrageous,” he said. “You’re asking our representative to fight for us in Sacramento, to get the resources we’re asking for and for what? Spend money on city bureaucracy and bloated overhead? Unbelievable.”

Meanwhile, the toilet story got even weirder when I read an article in the Noe Valley Voice that talked about the opening of Town Square in 2016, complete with plumbing for one bathroom. It was mentioned that an anonymous donor had offered to fund the bathroom in full and met with Rec and Park to see if the department’s estimate could be lowered from $600,000 to $800,000.

The anonymous donor turned out to be Noe Valley resident Rodrigo Santos, a civil engineer who has since been charged with bank fraud, aggravated identity theft and obstruction of justice. Evidence against him included checks he allegedly told clients to write to “DBI” — the Department of Building Inspection — which he then allegedly changed to “RoDBIgo Santos.”

Rec and Park spokesman Aparton confirmed the anonymous donor was Santos and said he met with department officials twice to help fund the bathroom. She said he “never asked.”

It’s unclear why project costs have skyrocketed by $1 million in just six years. Santos did not respond to a request for comment.

Back in Noe Valley Town Square, a derelict Porta Potty leans in the corner, open only to vendors at the farmers’ market on Saturdays. Someone taped a piece of paper to the door that said “$1.70.”

As for Noe Valley’s neighbors, several have said they still want a toilet – but they agree with Haney and Newsom that the cost is ridiculous. Leslie Crawford, co-founder of Town Square and Farmers’ Market, said she hopes a cheaper bathroom can make a difference.

“This is a popular and busy park with young children in need and people in need of homelessness and everyone in need,” she said. “Maybe we can find a more creative way to do this and be more economical.”

MoDOT to Close Section of Route D in St. Charles County for…

The Property Brothers’ Favorite Kitchen Trend From The…