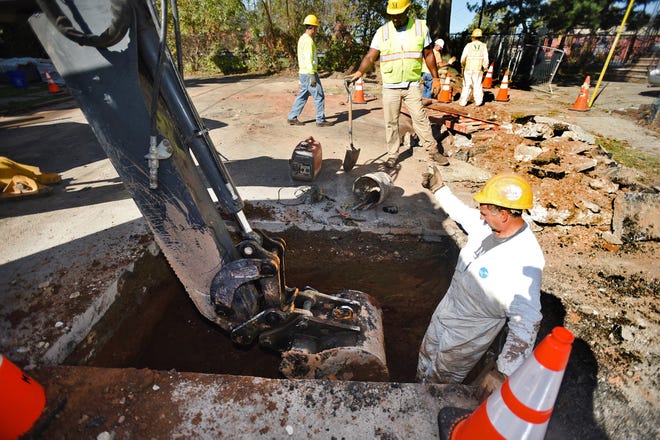 When President Joe Biden signed the bipartisan infrastructure bill last year that earmarked $15 billion for the removal of lead utility lines, New Jersey officials hailed it as a huge step that would accelerate efforts to provide safe drinking water.

But as part of the first round of funding, New Jersey will receive the second-lowest amount of money per lead pipe in the nation, according to a report released by the National Resource Defense Council’s environmental group.

Now a group of New Jersey officials is calling on the Biden administration to change the allocation formula.

“It’s hard to imagine what process led to this allocation, but it was clearly flawed and needs a complete overhaul to ensure funds reach Congress’ intended recipients,” the letter said. It was signed by Democrats Josh Gottheimer, Mikie Sherrill, Donald Payne Jr., Tom Malinowski and Donald Norcross.

The EPA did not immediately respond to a request for comment.

New Jersey has an estimated peak of 350,000 lead service lines and will receive just over $48 million, according to the report, which uses EPA-released allocations for the first round of funding. That’s an average of $138 per tube – the second lowest after Ohio at $109.

At the other end of the funding spectrum is Hawaii, which is getting $10,000 per lead pipe based on $28 million in funding and an estimated 2,800 lead service lines — the pipes that connect a water main to a home or business.

The findings were made by Elin Betanzo, a water safety consultant who helped uncover high levels of lead in Flint, MI’s water system, which spurred a statewide move to combat polluted drinking water.

In recent years, New Jersey’s water utilities have installed tens of thousands of service lines in areas of high water, including Bergen County, Hudson County, Newark, Paterson, Clifton, and the city of Passaic. Gov. Phil Murphy last year signed a bill calling for the removal of all lead piping in New Jersey within a decade, at an estimated cost of $2.65 billion.

Most of the states with the lowest allotment per pipe are in the Northeast and Midwest, which are home to some of the country’s oldest housing stocks – homes built before the dangers of lead were well known.

Although inhalation of lead paint dust is the predominant route to high levels of the metal in the bloodstream, drinking water with high levels of lead over time can cause a variety of ailments, particularly in children, including: nervous system disorders, learning disabilities, growth problems, disabilities hearing and problems with the formation and function of blood cells.

Because of its toxicity, the EPA has said that drinking water should not contain lead.

The NRDC said the EPA must complete and assess its latest report on drinking water infrastructure needs, and then allocate the $15 billion based only on the number of leading service lines in each state.

In their Wednesday letter to the EPA, the six New Jersey officials were more outspoken.

“We demand that you immediately reconsider these allocations and direct these funds to where they are most needed,” they wrote. “We also ask that you explain how this inexplicable decision was made and how your agency plans to avoid a repeat of this outcome.”

The amount of money states will receive per estimated lead service line via an NRDC report and Safe Water Engineering analysis of federal spending.