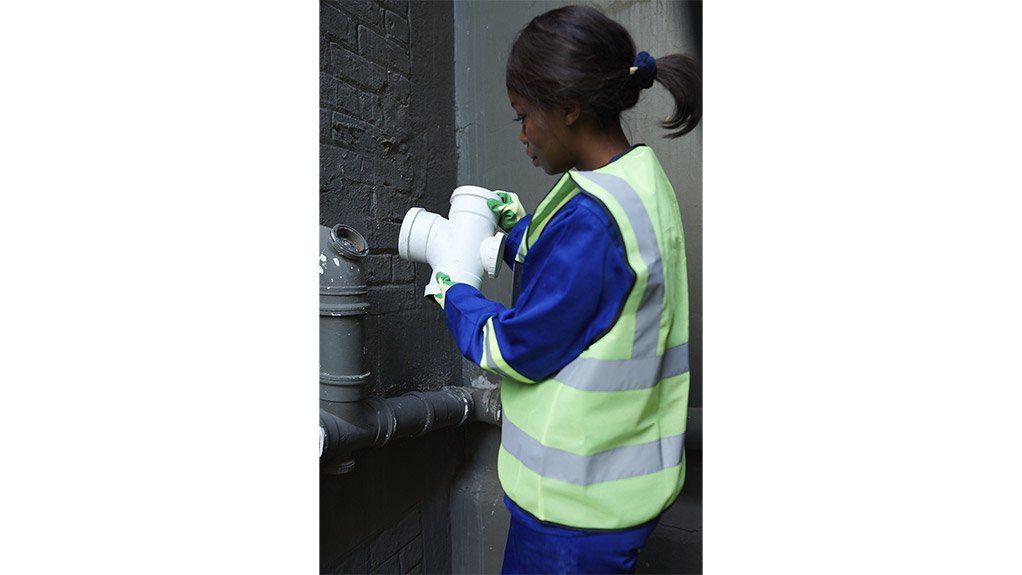 The findings of recent research by the Institute of Plumbing South Africa (IOPSA) on the level of compliance for plumbing across the country are cause for concern. This is especially true in a water-scarce country that is also grappling with severe water, sanitation and energy crises. Non-compliant plumbing is exacerbating the situation while posing a serious health and safety risk to the general public; negative impact on the environment; and damage to public and private property.

Brendan Reynolds, IOPSA Executive Director, says these findings show a serious disregard for the rule of law and a very limited understanding of the importance of the plumbing profession. “Municipal by-laws are poorly enforced, a situation that has allowed many unqualified ‘plumbers’ to work without fear of repercussions. This is despite the many risks associated with poor quality plumbing. Anecdotally, we expected to find a significant number of non-compliant plumbing across the country.

However, we certainly did not expect the situation to be so dire. IOPSA had a good idea of ​​the extent of non-compliant water heating system installations as our inspectors regularly investigate them and their research only confirmed our concerns. However, we were unprepared for the scale of other non-compliant types of plumbing. We cautiously expected that between 30% and 40% of this plumbing would be non-compliant. We were therefore alarmed to learn that between 70% and 80% of these investments are non-compliant. To be clear, most qualified installers are trustworthy and adhere to regulations and standards. The real challenge is with unqualified ‘plumbers’ who have not been properly trained and often unwittingly cause serious problems,” says Reynolds.

The survey was conducted in April and May 2022 by 42 experienced IOPSA plumbing inspectors across the country. A total of 725 properties in the formal housing sector in eight provinces were inspected. IOPSA’s inspectors asked permission from property owners to conduct visual inspections of other aspects of their installations. Their focus was only on significant and/or critical security flaws. Homeowners were also made aware of these issues so they could take the necessary actions to fix them. Inspectors only reported what they could see from the outside and a more detailed investigation would be required to fully establish the extent of non-compliance. However, the information gathered by the team of IOPSA inspectors was sufficient to provide a statistically significant indication of the level of plumbing compliance in the country.

Of concern is that many property owners did not allow IOPSA staff to inspect other plumbing fixtures on their properties. This was particularly the case in the suburbs of KwaZulu-Natal, Limpopo, Mpumalanga, Free State, Northern Cape and Eastern Cape, while no reports were received by IOPSA inspectors in the North West. As a result, IOPSA’s research is primarily focused on Gauteng and the Western Cape. They are also heavily weighted for water heating systems such as geysers, solar water heaters, and heat pumps.

Of the 725 water heating systems tested nationwide, 67% were found to be non-compliant.

These installations are not energy efficient, putting additional pressure on an already overloaded power grid and increasing a property’s carbon footprint. They also pose many health and safety risks. These include scalding and electrocution, while non-compliant water heating systems also provide a breeding ground for harmful bacteria and pathogens. Legionnaires’ disease and Pontiac fever, for example, are caused by the bacterium Legionella, which grows and multiplies in building water systems. Water containing legionella can spread in droplets small enough for people to breathe. Also, under mitigating circumstances, an improperly installed water heater can explode, endangering the lives of a building’s occupants. Not to mention the significant property damage that can result from improperly installed water heating systems.

IOPSA auditors inspected 394 water supply installations nationwide, including cold water lines to the property and fittings. Of these installations, 57.6% were found to be non-compliant.

It is imperative that these systems are installed correctly to avoid contamination of drinking water and to eliminate leaks. Repairing leaks is always the first step for responsible property owners to reduce their water footprint. These interventions, combined with the use of smart water-saving faucets and other measures, helped Cape Town avert a crisis when it was hit by the worst drought in its history. The Eastern Cape is now approaching its “Day Zero” when the taps will run dry completely. This serves as a stark reminder of the need to use our scarce water resources more efficiently, and this starts with ensuring that supply systems have been installed correctly.

Meanwhile, 65.5% of the 264 sewage installations, including from washbasins, washbasins, bathtubs and showers, that were inspected did not comply with the legislation.

These low-quality assets spread dangerous waterborne diseases and can contaminate scarce freshwater and groundwater resources. Certainly it is worrying that compliance is so low, as many areas are still grappling with a severe drought.

Many areas that have experienced dry conditions over the past seven years rely heavily on groundwater resources as their only alternative supply. These water sources must therefore be protected from contamination.

IOPSA inspectors also examined drainage systems, such as B. Waste water from toilets, gullies and manholes, on properties. Of the 248 sites inspected, 74.2% were found non-compliant. These faulty installations can also contaminate freshwater sources and spread waterborne diseases. They can also damage local infrastructure and put further pressure on already strained local government benefit systems. More than a quarter of South Africa’s municipalities are on the verge of collapse and as a result do not have the financial resources to develop new infrastructure for service delivery.

A total of 159 stormwater systems were inspected by IOPSA. These included gutters, underground drainage and stormwater drains on properties, among others. 48.4% were found non-compliant. These systems can also damage community infrastructure; contaminate freshwater sources; and spread waterborne diseases. They are also contributing to the severe flooding that many parts of the country have experienced this year.

A total of 727 other sanitation systems, such as B. Grease traps and those disposing of pool waste were also inspected by the IOPSA auditors and 17.6% were found non-compliant.

While IOPSA’s inspectors only focused on the plumbing, previous research conducted by the Water Research Commission, among others, has found that up to 60% of all plumbing materials used in the country are non-compliant. According to Reynolds, “We have this odd situation in South Africa where it is legal to sell certain products but illegal to install them.” in South Africa,” he says.

A 2019 survey conducted by the German Society for International Cooperation and Trade & Industrial Policy Strategies found that out of the 126,000 people who worked as plumbers, only 20,000 were qualified professionals. A qualified plumber has completed three years of structured and formal training. After completing the theoretical and practical training, they also have a more holistic view of the industry. This includes the importance of safety, health, environment and quality.

Findings show that public authorities also need to help regulate this industry by enforcing their municipal service ordinances. Research conducted by IOPSA in 2021 found that only 33% of installers have a copy of their municipal water ordinance. Only 80 of the 256 municipalities had publicly available water supply by-laws, and only 15% of plumbers said local government holds them accountable for their work.

“Plumbing is a critical part of water and sanitation services. While much of the focus is on developing “hard” infrastructure like dams and desalination plants, water from there still needs to be channeled to homes and businesses. Sewage treatment plants and large plants are meaningless if the sewage never reaches them. These are important jobs to be performed by qualified installers. It is painfully clear that something urgently needs to be done to end the situation. I doubt that overwhelmed municipalities can bring about the necessary changes on their own.

The private sector has already developed a workable solution in the form of a Plumbing Industry Registration Board Certificate of Conformity. Significant positive impacts could be achieved in a very short time and at a very low cost if we focus on securing a quality plumbing installation. With the water, sanitation and energy problems the country is facing, there is no time to think. We must act immediately and decisively,” concludes Reynolds.