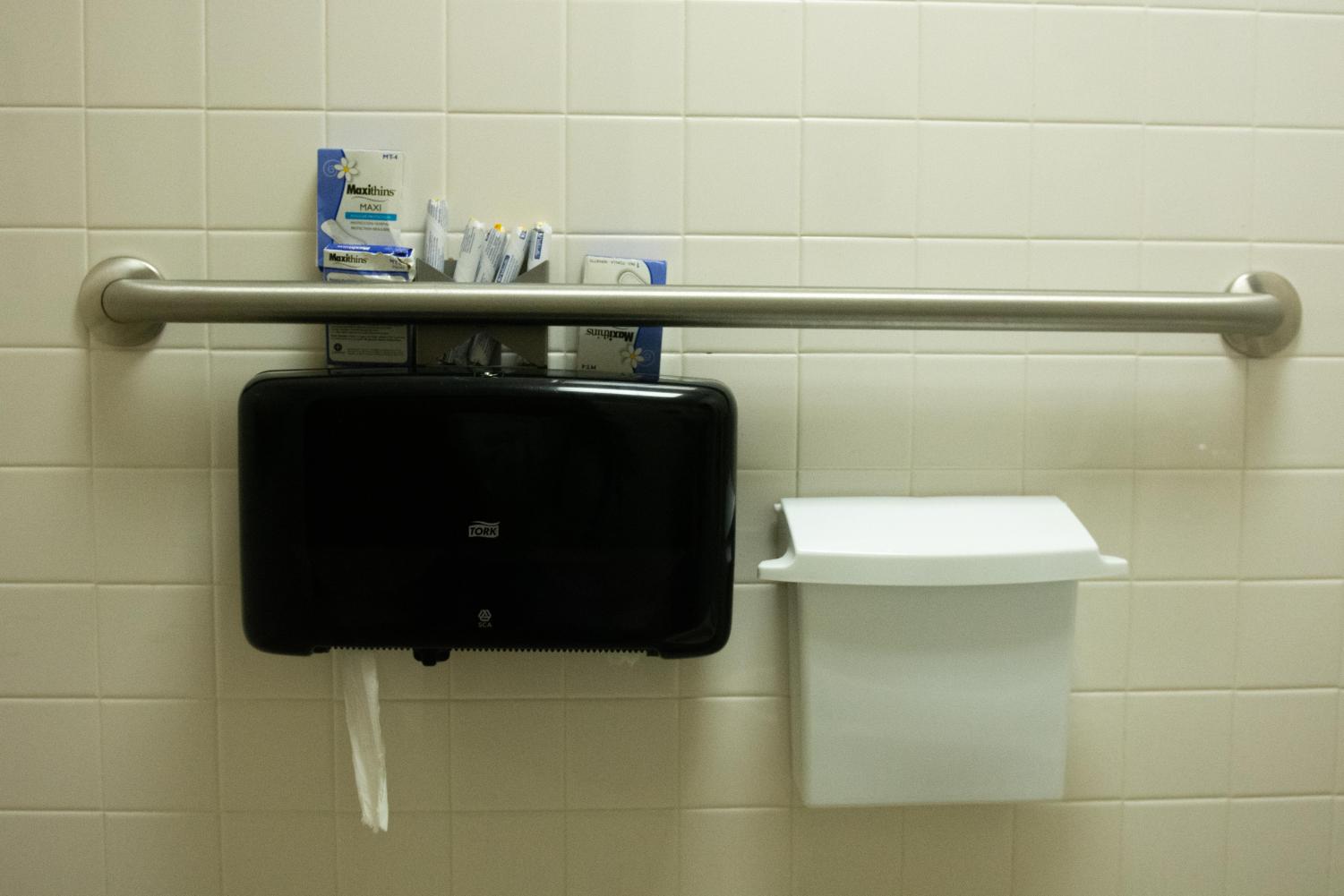 Members of the Northwestern community have been campaigning for gender and menstrual justice in campus restrooms for years. Some of these campaigns are beginning to show results this year as students and faculty work with the university to achieve these goals.

The dispensers have been installed in shared bathrooms and in all-gender bathrooms to ensure everyone who is menstruating can access them.

MEA sent out a survey on menstrual products to the student body last winter, which received 662 responses. 99.2% of respondents said it would be helpful to have access to menstrual products in dormitories. While most installed bathroom dispensers have tampons and not pads, 79.5% of college students surveyed said they would like pads, compared to 66% who said they would want tampons.

MEA director of public relations and Weinberg junior Ruba Memon said some students have to choose between buying menstrual products and having a meal. Ibrahim added that period poverty is a problem among students.

“A facility like Northwestern should be responsible for meeting (menstrual) needs, especially in dormitories — places that people think of as home on campus,” Ibrahim said.

She said these installations are just a first step, and Douglas said Residential Services will measure student response to inform a possible expansion of menstrual product dispensers.

“Menstrual products should be like toilet paper,” said the women’s center’s director, Sarah Brown. “They should be in every toilet.”

According to Brown, most of the work on menstrual justice was student-led. Douglas said MEA made the first formalized request for menstrual services.

Brown said she believes the facilities have cleared four new all-gender toilets to be built, including one at Annie May Swift Hall. The locations will be chosen for rapid installation and removal of current all-gender bathrooms, Brown said.

“It finally feels like something is picking up steam,” Ph.D. Student Nathan Lamp said.

What complicates building toilets for all genders is Illinois’ sanitation code, Brown added. According to the code, all-gender toilets do not count against the number of toilets a building requires. A bill changing this policy is currently in the Illinois Senate, but until it passes there will be less incentive to build toilets for all sexes.

Brown and Michelle Manno, Assistant Provost for Diversity and Inclusion, are working to centralize a system to install these toilets. Facilities and departments are currently splitting funding for these bathrooms, which Lamp estimates will cost $80,000 each. According to Assistant Director of Multicultural Student Affairs Matthew Abtahi, this policy makes it difficult for smaller departments to have all-gender restrooms.

Departments without all-gender toilets find it difficult to recruit transgender and non-binary students or faculty to work for them, Abtahi said. They called the current situation an “unfair band-aid solution”.

“The university relies on student exhaustion during protests,” Abtahi said. “It was pre-COVID that the students were protesting in the restrooms, they had town halls with deans to try to go school by school (to lobby for it).”

Those discussions, Lamp said, have been ongoing since she arrived at NU in 2012.

In September 2019, the Gender-Queer, Non-Binary and Trans Task Force released a report detailing how the university should support trans students, including a centralized identity management system. Abtahi said some students criticized the fact that the group, made up of students, faculty, staff and alumni, did hundreds of thousands of dollars in consulting work for the university to take care of the problem rather than being compensated for it. The task force also released a report in 2015, Lamp said.

“It seems like (the university) just put it in a desk,” Lamp said. “There wasn’t much traction for several years.”

Lamp said she is optimistic that the new university administration will make a significant difference.

“It’s nothing new,” Lamp said. “Students have been asking for this for some time… Work is ongoing and even ongoing.”

— Northwestern must act now on all gender baths, say some faculty senators