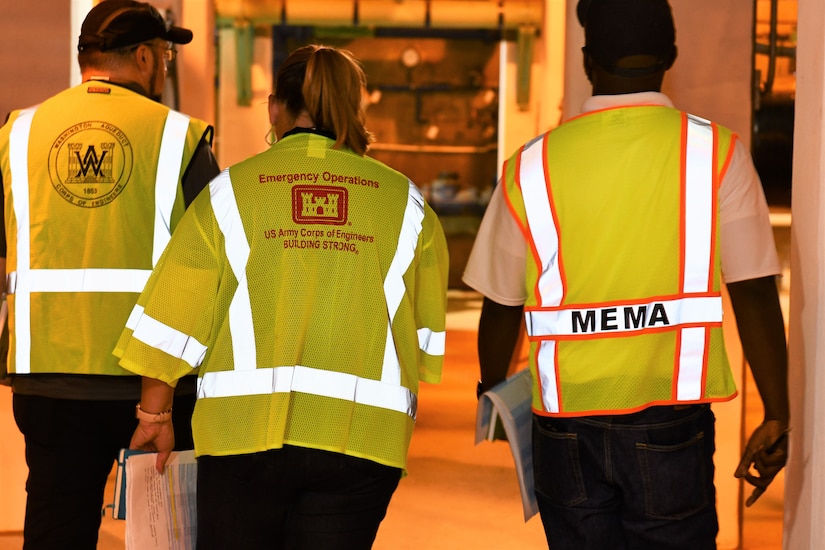 Water is life. It is an integral part of various systems, be it in the human body or in wetlands. Water moisturizes, cleanses and literally everything and everyone needs it to survive. Too much water and the banks overflow. Just as harmful, too little water or water that is impure wreaks havoc, causing imbalances and disrupting systems.

In late August of this year, the US Army Corps of Engineers (USACE) provided the country knee-deep with mission assignments the Corps of Engineers is familiar with, such as wildfires, floods and hurricanes. An unexpected crisis prompted USACE to launch a company-wide, unified response to a less-familiar mission—the clean water supply.

The upper Pearl River, which flows through North Jackson, Mississippi and supplies water to Ross Barnett Reservoir, experienced flooding that prompted the USACE’s Vicksburg District to close its Level 2 Emergency Operations Center (EOC) on August 27 Enable to provide direct and technical assistance to the State of Mississippi, affected counties, partners and sponsors.

Just as the floods receded, another crisis struck. The chemical makeup of the water in Ross Barnett that supplies raw water to OB Curtis’ Water Treatment Plant (WTP) has changed in ways that have affected the ability of the WTP to function and disrupted water supplies to more than 150,000 residents and businesses in the state capital.

On August 29, the city of Jackson declared a water system emergency and the state requested an emergency response statement. The next day, a federal emergency was declared, authorizing the Department of Homeland Security (DHS) and the Federal Emergency Management Agency (FEMA) to coordinate disaster relief efforts.

The USACE received a FEMA Mission (MA) assignment on September 1 to provide technical assistance to the city of Jackson. As part of the overall MA, USACE was tasked with developing a Resiliency Playbook to help with long-term improvements at Jackson, OB Curtis and JH Fewell’s water treatment facilities.

Anyone within the USACE organization with water, wastewater or water supply experience who could work on this challenge on the WTPs was sought for assistance.

Within the first two days of USACE’s MA, a team from Vicksburg County was on site with OB Curtis and Fewell to begin conducting assessments to determine what Unified Command could do to help with the repair of the two water treatment plants help. The Unified Command consisted of USACE, the Mississippi Emergency Management Agency (MEMA), EPA, FEMA, USACE, the City of Jackson and was led overall by the Mississippi State Department of Health (MSDH).

Jamon Rucker, a cost engineer for Vicksburg County, who has 10 years of wastewater experience, was one of the members of the initial assessment team. “I had previously worked for the Mississippi Department of Environmental Quality, so I was familiar with OB Curtis from doing inspections there. I had knowledge of the sludge part of the plant and solids removal so I could give my opinion on what needed to be done,” explained Rucker.

The reports that the USACE Initial Assessment Team produced were the first target points for everyone else to begin work that helped restore water pressure and potable water within two weeks of the initial crisis.

Capt. Hayden Schappell of Vicksburg County became the lead project manager for the development of the Resiliency Playbook.

“This has expanded my understanding of what the Corps is really bringing to the table. We’re so focused on what our individual districts can do, and we’re getting very good at it. But the corps is so much bigger than that,” said Schappell.

With water pressure and then water quality restored, USACE’s role shifted to long-term solutions, developing a list of more than 60 projects to be included in the Resiliency Playbook to further improve the City of Jackson’s water infrastructure.

dr ERDC’s Edith Martinez-Guerra, Environmental Research Engineer, regularly inspects military installations and verifies the resilience of their water and power systems. She performed assessments of the Jackson WTPs based on the checklist that ERDC produces for military installations and adapted them for civilian use. The checklist can still be used as a benchmark for improvement in the WTPs and is an integral part of the playbook.

The USACE Vicksburg District will be the long-term project manager and will continue to support and assist the city when the FEMA mission assignment ends in late October. Katy Breaux, a senior project manager for the County of Vicksburg with a wealth of experience in environmental infrastructure programs, will be the continuity for the implementation of the playbook.

“This is unlike any emergency response we have ever undertaken. Everything we did was novel and new. Because it’s so technical and so specific, it was a very different experience and for disasters,” Breaux said. “Sections 592 for the state of Mississippi and 219 (Water Resources Development Act of 1999, as amended 2007) projects specific to the City of Jackson, as well as the PAS (Planning Assistance to States) program under the General Board of Inquiry are long-term solutions that have was identified to help.”

Not only did USACE work as a company to provide water supply solutions, but something even greater was accomplished by working as a state-wide team.

“We have strengthened our relationships with our state and federal partners, working side-by-side. Edith conducted water tests and worked with the EPA to discuss what needed fixing. Working closely with FEMA and the Department of Health, who have the expertise that has been conducting research on the plants for years, has been instrumental in the government support that has benefited people,” Breaux added.

It’s also important to note that the Mississippi National Guard, MEMA and volunteers helped provide immediate relief by distributing water to ensure people survived during what was typically the hottest month of the year.

For the US Army Corps of Engineers, we understand the importance of water to the maintenance and harmony of systems. Many USACE missions such as navigation, flood risk management, and environmental protection exist because of water and the need to engineer, renovate, and manage all of the effects of water.

When our nation, states, and communities call, USACE is able to answer the tone to help in emergencies, whether it be floods, wildfires, hurricanes, or any other crisis Mother Nature throws our way.