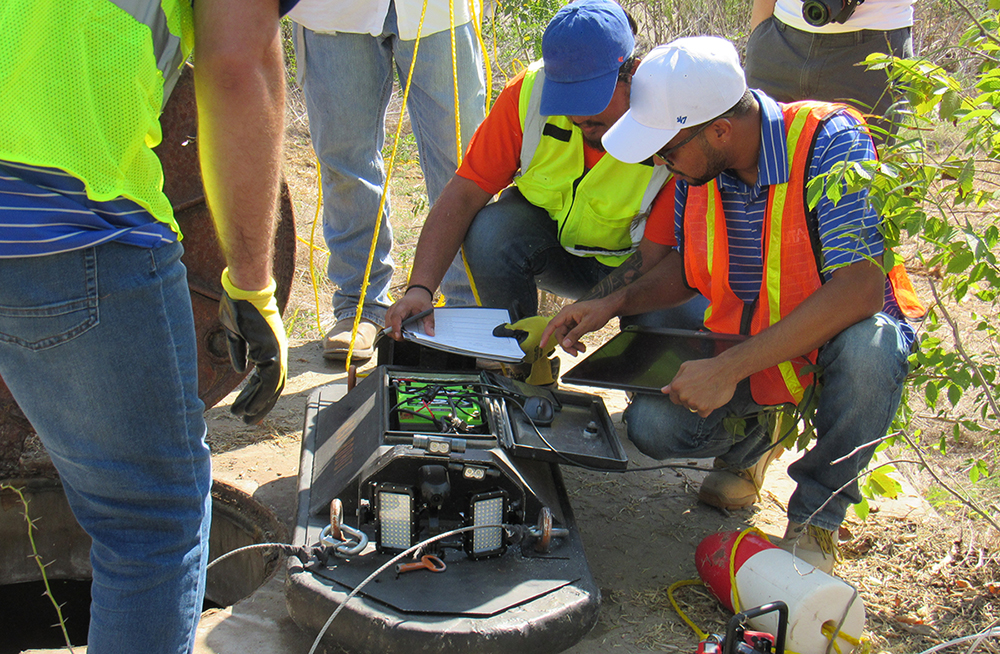 Technical research team members review data collected by the unmanned robot after a pipeline inspection at the Dallas/Ft. Worth, Texas area.

DETROIT – Ali Abolmaali has only been Dean of Wayne State College of Engineering for two months, and already the former Chair of the Department of Civil Engineering at the University of Texas at Arlington is bringing his research to Midtown.

“I have a 15-person team led by Senior Program Manager Sara Ridenour to transfer some projects and secure new projects for Wayne State in Michigan,” Abolmaali said.

The Abolmaali team determines the remaining useful life of pipelines through robotic inspection and artificial intelligence research that can be just as successful in Michigan as it is in the Lone Star state. Abolmaali has received more than $38 million in government grants and donations for his research projects, including funding to inspect and predict the remaining life of existing sewer piping systems throughout the Dallas/Fort Worth area.

The history of water supply and sanitation systems in the United States dates back to the 19th century when large cities built pipelines out of brick and mortar. As technology has evolved over the years, piping materials have also evolved; however, methods have only recently been developed to inspect the more than 800,000 miles of buried public sewer pipes that crisscross the US landscape. 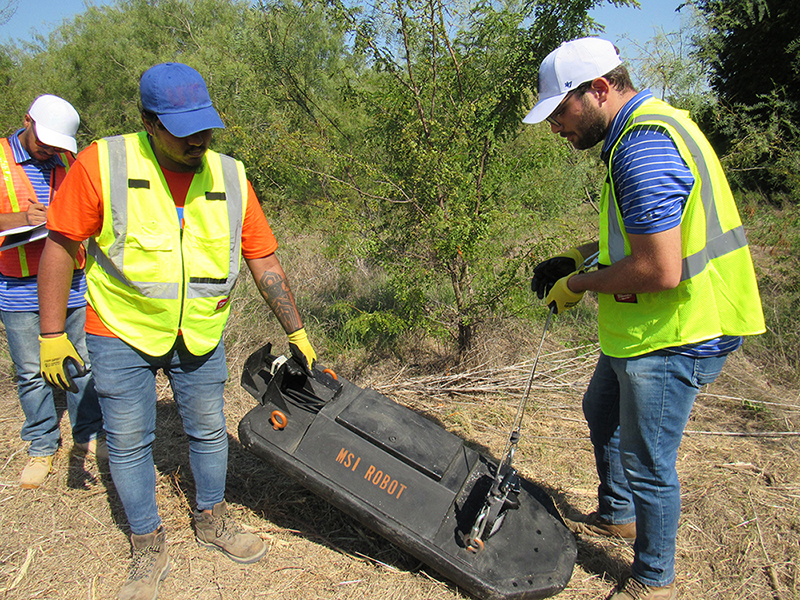 Team members prepare to deploy the robot through a shaft in a pipeline.

Widely credited as a pioneer in underground systems, Abolmaali has conducted several high-profile structural failure studies for the National Transportation Safety Board and built a prototype robot to inspect pipeline wear and tear, saving cities millions in unnecessary repair and maintenance costs.

“We built robots that took us four years to complete in various stages,” said Abolmaali, who studied the collapse of the Boston Tunnel and Minneapolis Bridge. “Now our robots are considered state-of-the-art in capturing advanced lidar and sonar data, which feeds into the artificial intelligence algorithm developed by my team. The robotic inspection capability coupled with the artificial intelligence algorithm will make up the research venture we are bringing to Wayne State, which will be unique in the state as there are no other universities with similar capabilities.”

Abolmaali’s team, which now has five robots, inspects pipes with flow (sewer lines) or without flow (gravity or pressure lines) for structural defects and damage. The robots are equipped with lidar, sonar, a 360-degree panoramic video camera, and a geographic information system (GIS) that displays data on their location and any problems found.

“This data is then automatically analyzed by our professional engineer, who assesses the pipeline based on national specifications,” Abolmaali said. “Once we receive this classification, artificial intelligence we have developed will determine the remaining lifespan of the pipelines. The results of the analysis may show deviations in the remaining useful life in a pipeline section; For example, the remaining life of a section of pipe may be more than 20 years, while another section of pipe may be on the verge of failure. With this information, cities can prioritize their budget.” 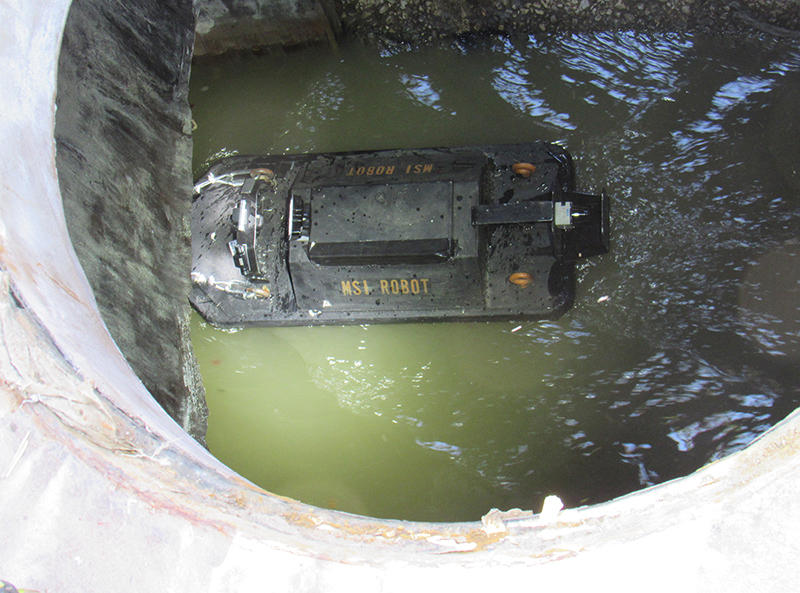 A robot swims in a sewer as it prepares to inspect the lifespan of a pipeline in Texas.

“The communities in the Dallas/Fort Worth area are very impressed with what we are doing,” said Pokharel, research team member and former Abolmaali graduate student. “The focus on underground pipes is important because they can’t always be accessible to see what’s going on inside and what’s building up inside with scale and acid gases building up due to the sewer and eventually over time corrode.

“We’ve heard several messages where a system collapses and you suddenly find sinkholes,” continued Pokharel. “These are the results of the lack of adequate information on the condition monitoring of the structural piping system. Our unique expertise is in examining the structural condition of municipalities’ pipelines and advising them on the remaining useful life of a given pipeline section through robotic inspection and artificial intelligence. Our goal is to ensure that when assessing the structural condition of the pipelines, we take preventive measures to avoid the risk of a catastrophic collapse. This avoids significant damage to the cities infrastructure and avoids large repair costs for the taxpayer.”

Since arriving in Wayne State, Abolmaali has been in contact with the City of Detroit regarding the pipeline project. He says he welcomes an upcoming meeting with city officials as well as the Great Lakes Water Authority, which operates the largest single-site wastewater treatment plant in North America.