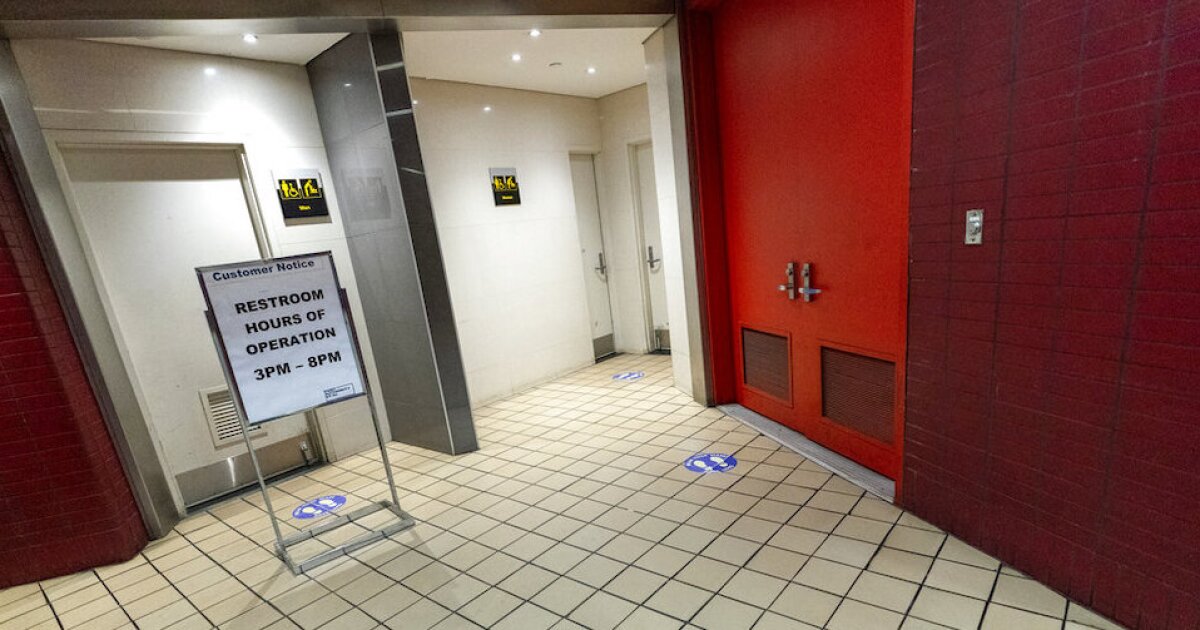 If a person needs to use the bathroom in public, it can be difficult to find a toilet without some sort of locking mechanism. Often it’s in a coffee shop, supermarket, pharmacy or other private building, so it’s not a real public toilet.

The US has eight public toilets for every 100,000 people. That number is comparable to the rate in Botswana and well behind Iceland’s world-leading 56 public toilets per 100,000.

So why is it so difficult to find a public restroom in the US?

It’s a question with a complicated answer, and it has a long history. Surprisingly, it relates to many different issues, including public health, social services, and almost every form of discrimination imaginable.

Public toilets have been a fact in the US and elsewhere for centuries—at least since the Roman Empire. But they were fairly public, with no walls or barriers between them. The expectation of privacy when going to the toilet in public spaces arose in the 19th century with the industrial revolution and houses with modern sanitary facilities.

Later, in the 19th century and into the early decades of the 20th century, sewage disposal gained importance. As world leaders began to understand sanitation’s role in curbing waterborne diseases, cities built and celebrated their public toilets.

Temple University history professor Bryant Simon, who is a graduate student and is writing a forthcoming book on the history of toilets, shared more about why toilets used to be a big deal.

Bathrooms quickly became places where people became separated. Bathrooms were separated by gender, as is often the case today. But the divisions can go further and lead to discrimination against many different groups.

For example, public restrooms began targeting the LGBTQ community as early as the 1930s.

In the first half of the 20th century, bathrooms were often segregated by race, with Black Americans or Southwest Latinos having their own separate facilities.

“The bathroom acts as a kind of hardware of inequality because essentially you needed a public bathroom or some kind of bathroom to be outside and in public,” Simon said.

Toilet segregation may sound like a distant thing or a footnote, but that legacy extends to the present day.

In 2018, two black men were prevented from using the restroom at a Starbucks location in Philadelphia’s Center City. The incident prompted Starbucks to act as America’s de facto public toilet. It changed its policy to allow people to use the restrooms at its more than 15,000 US locations without buying anything.

While money can be a barrier to private toilets in stores, historically limited access to public, self-contained toilets has been. In the 1960s and 1970s, public toilets emerged that required small payments, but were closed due to concerns about gender discrimination.

The other major push to remove public toilets came in the 1980s as part of a broader push to push homeless people to the outskirts of cities by denying them access to public spaces and aggressively enforcing public urination laws.

If you don’t have your own home, access to a toilet can be quite a distance.

“Most of us are used to having our own bathroom,” said Raven Drake, program manager for the Street Roots Ambassador program. “Where I lived when I was homeless, the nearest bathroom was a mile walk away. Imagine walking a mile to the bathroom and most of us can’t imagine walking 50 feet to our bathroom let alone a mile.”

Drake works with the homeless in Portland as part of the local newspaper Street Roots. She’s an advocate for toilet access as a central part of the fight against homelessness, and she herself was left unhoused during some of the toughest shutdowns of the COVID-19 pandemic in late 2019 and early 2020.

“We conducted a survey with the Joint Office of Homeless Services on bathrooms, the importance of bathrooms and access to clean water, and an overwhelming number of people responded that they did not have access to public toilets,” Drake said. “So we took this initiative to place 172 port-a-potties across the city.”

Underinvestment was also a big problem. If public toilets are not funded or maintained, they can become derelict. You may become unsafe or unsanitary.

Starbucks announced in July that it would close 16 stores over safety concerns. CEO Howard Schultz said in June that the coffee giant might limit its current public restrooms to customers only as part of its broader drive for store safety.

So if Starbucks decides to no longer serve as America’s public toilet, where will people be able to go? Even if a person isn’t homeless, advocates for access to bathrooms like American Restroom Association President Steven Soifer point out that it’s a problem.

Soifer is urging government officials to get involved here, but local officials may need to take the lead.

“There will be fewer and fewer opportunities for people to relieve themselves and that’s also becoming a public health issue,” Soifer said.

The consequences can be deadly for communities when toilets are not available. In 2017, at least 16 people died and hundreds more fell ill in a hepatitis A outbreak in San Diego.

The disease spread primarily through contact with feces and public stools.

Acknowledging that a lack of public toilets, especially for those without shelter, was part of the problem, the city helped contain the outbreak by installing public toilets and hand-washing stations.

But even then, a lack of funding or maintenance can quickly lead to toilets disappearing. Earlier this year, researchers at San Diego State University reported that many restrooms have been closed in the wake of the COVID-19 pandemic. That nearly half of the county’s census areas, home to 40% of the population, had no public restrooms.

Other cities are moving forward with plans to install new public toilet facilities, including Portland, Philadelphia and Washington, DC. But there’s still a shortage of public restrooms in the US, and it’s pretty bad.

In 2011, the United Nations independent expert Catarina de Albuquerque investigated water and sanitation rights on a mission to the United States. Her report found a case in Sacramento, California, where the closure of public restrooms and enforcement of public urination and defecation laws resulted in a homeless person traveling miles to dispose of an entire community’s human waste.

In the report, she pointed out that the laws were discriminatory and resulted in “a violation of human rights that may amount to cruel, inhuman or degrading treatment.”

Newsy is the nation’s only free 24/7 national news network. You can find Newsy via your TV’s digital antenna or stream it for free. See all the ways you can view Newsy here.