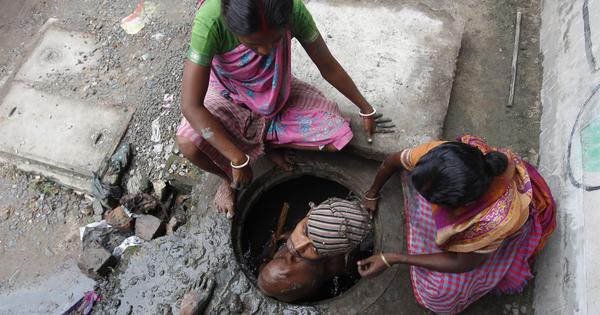 In 2013, Parliament enacted the Manual Scavenger Employment and Rehabilitation Prohibition Act, which banned hiring people to perform hazardous cleaning of sewers or septic tanks. Since then, 481 workers, mostly from the marginalized communities, particularly Dalits, have died after being hired to clean sewers or septic tanks, according to information the government provided to Parliament in March 2020.

It is very likely that the number was understated as the National Commission for Safai Karamcharis, a public body, collects these numbers mainly on the basis of media reports and NGOs.

The statutory prohibition enshrined in the 2013 law is clearly not working. But why did this happen?

Soaring prices are relentless, as are deaths in sewers and septic tanks | Corridors of power are equally blind to the sufferings of the people #Action2022 campaign reaches #Nagpur in #Maharashtra | #StopKillingUs #JaiBhim pic.twitter.com/fhrBwj9LvN

First, it should be noted that Section 7’s ban on manual cleaning did not automatically take effect statewide once the law received presidential approval. Rather, the provision obliges each state government to announce the date on which this ban will take effect in their respective state.

Tracking these notifications is difficult as the India Code website only publishes the Government of India notifications and not the state governments. We suspect most states have not issued the required notice because once Section 7 goes into effect, it will hold state bureaucrats responsible for local government bodies that use workers to clean up municipally run sewers liable.

Even assuming that some states have notified Section 7, it should be noted that the Center lifted the blanket ban on using workers to clean sewers and sewers when it issued the Prohibition on Employment as Manual Scavengers and Their Rehabilitation Rules, 2013 , notified. These regulations allow the establishment of protective equipment and equipment necessary for people tasked with cleaning sewers and septic tanks.

Put simply, the government signaled that it was okay to use workers to clean sewers and septic tanks, provided they had the right equipment.

These rules may have been necessitated by the government’s realization that the full ban imposed by Parliament in 2013 would result in clogged sewers and overflowing septic tanks, as most Indian cities lack machine cleaning equipment. The imposition of a blanket ban without planning practicable alternatives inevitably led to such easing.

Even if the government cannot enforce a total ban on manual cleaning of sewers and septic tanks, it can still use the law to prevent deaths and ensure justice for the families of workers who die during the dangerous cleaning.

In this context, there are two issues that need to be discussed. The first is who exactly should be punished? Should it be the contractor hired by the private property owner or local authority to clean the sewer or septic tank who hires out the work to workers or subcontractors who end up losing their lives?

Or should the law place liability directly on the landowner and the local authority itself? The answer to basic principles would depend on whether the liability is criminal or civil.

In theory, a conviction under Section 7 of the Prohibition of Employment as Manual Scavengers and Rehabilitation Act, 2013, 2013 should be easier because it criminalizes those who “directly or indirectly” employ laborers to dangerously clean sewers or septic tanks.

The problem, however, as mentioned earlier, is that the government itself has compromised this provision by announcing rules that allow workers to clean sewers or septic tanks, provided workers are provided with safety equipment.

A simpler, and perhaps more effective, way of creating deterrence is through civil law. Under tort law (the branch of law that deals with civil wrongdoings such as negligence), property owners can be held liable for deaths on their properties even if the abandonment was contracted, particularly where the death was caused by hazardous material known to be hazardous.

When used intelligently, tort law can lead to justice, but unfortunately, as is usual in India, the matter ended up in the form of a public interest litigation before the Supreme Court, which resulted in a rather unsatisfactory verdict in 2014.

Aside from some vague instructions, the Supreme Court also demanded the payment of Rs 10,000 to the family members of those who died cleaning septic tanks or sewers. To be fair, the ruling opened the door for families to seek redress, but because it’s so poorly written it’s also caused confusion on two counts.

First, the ruling was not clear on whether it applied to deaths in septic tanks on private property. A cursory clarification by the court in 2016 may have helped resolve the issue, but then it was unclear exactly who had to pay the compensation, particularly in the case of deaths on private property.

Would it be the property owner or the person who hired the workers to clean out the septic tank? In more than a few cases, higher courts have simply ordered local government to pay compensation, including for deaths on private property. In fact, taxpayers are subsidizing private property owners for their negligence.

Second, the Supreme Court’s approach of setting compensation at Rs 10 lakh meant that a worker, regardless of age or earning potential, would receive the same compensation whether he died in 2014 or 2022.

Much of this confusion could have been avoided if the Supreme Court had approached the issue through the prism of absolute liability, whereby the owner of property is liable for any damage caused to his property by hazardous materials.

Not even “force majeure” can be claimed as an exception to this principle. This test was developed by the Supreme Court in the jurisprudence following the Bhopal gas tragedy. This approach would have made it clear that property owners would be liable for damages.

Similarly, on the issue of assessing damages, if the Supreme Court had based its judgment on fundamental tort principles, it could have cited well-developed tort principles to guide the authorities in the question of compensation to be paid, and various factors in doing so bear in mind as fixing a static sum of Rs 10 lakhs in damages.

Tort damages are generally compensatory and intended to restore the person who suffered harm to their original position. In the event of the death of workers, the law will seek to provide financial compensation to the family equal to the workers’ potential income in a scenario where they were still alive.

Rather than wait for the Supreme Court to clarify its flawed 2014 ruling, Parliament should consider codifying the aforementioned test by making it law that property owners are liable for damages for the deaths of workers in septic tanks and sewer lines.

Parliament should also clarify who counts as the “landowner” of any residential or commercial development or local authority that operates sewers.

At the same time, Parliament should consider establishing a formula like that in the Labor Compensation Act to help the competent authority determine compensatory and punitive damages for the deaths of workers in septic tanks and sewers, while keeping an eye on factors such as inflation.

A law that makes it clear to property owners that they are liable for both compensatory and punitive damages regardless of who employed the dead workers will hopefully have some sort of deterrent effect. Most property owners and even the government only understand the language of money, and hopefully if the law makes the deaths of workers expensive enough it can result in fewer deaths.

Prashant Reddy T is a lawyer and Harsh Tripathi is a law student at NALSAR University of Law.

Find Plants, Tools, And Community At Hardware 2.0 In Downtown Brooklyn