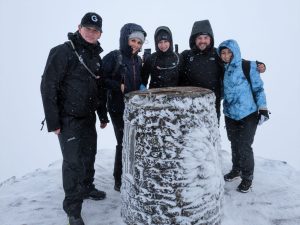 A team of fundraisers from City Plumbing reached the Snowdon summit on January 15 raising thousands of pounds for the Teenage Cancer Trust.

The rise concludes City Plumbing’s three-month fundraiser – dubbed Mission Unstoppable – in aid of charity partner Teenage Cancer Trust. After 10 years of partnership with the charity, City Plumbing and his team have raised hundreds of fundraisers across the UK and hope to increase the total raised to £3million in 2023.

Liz Forte, Chief Marketing Officer, said: “Ten years on from our charity partnership with Teenage Cancer Trust, we have raised almost £3million for this fantastic charity. Today, partnership is an integral part of our business, and all of our teams across the country are involved in our fundraising efforts in some way. Together we are helping teenagers access the support and services they need through a charity that is wholeheartedly committed to their cause.”

Jon Taylor, Electrical Manager at City Plumbing’s Colindale branch, who led the rise, added: “We put out the call and a great team from across the plumbing and heating world responded. 26 strangers drove hundreds of kilometers and huddled on the fringes in temperatures of -6°C and winds of 80 km/h. Knowing that we support the amazing work of the Teenage Cancer Trust has made the climb absolutely worth it. The charity does an incredible job of supporting youth who have been diagnosed with cancer, providing support and services when they need it most. We are very proud to have met our challenge and thank everyone who donated.”